Nelle Gets Frazzled and Considers Her Options 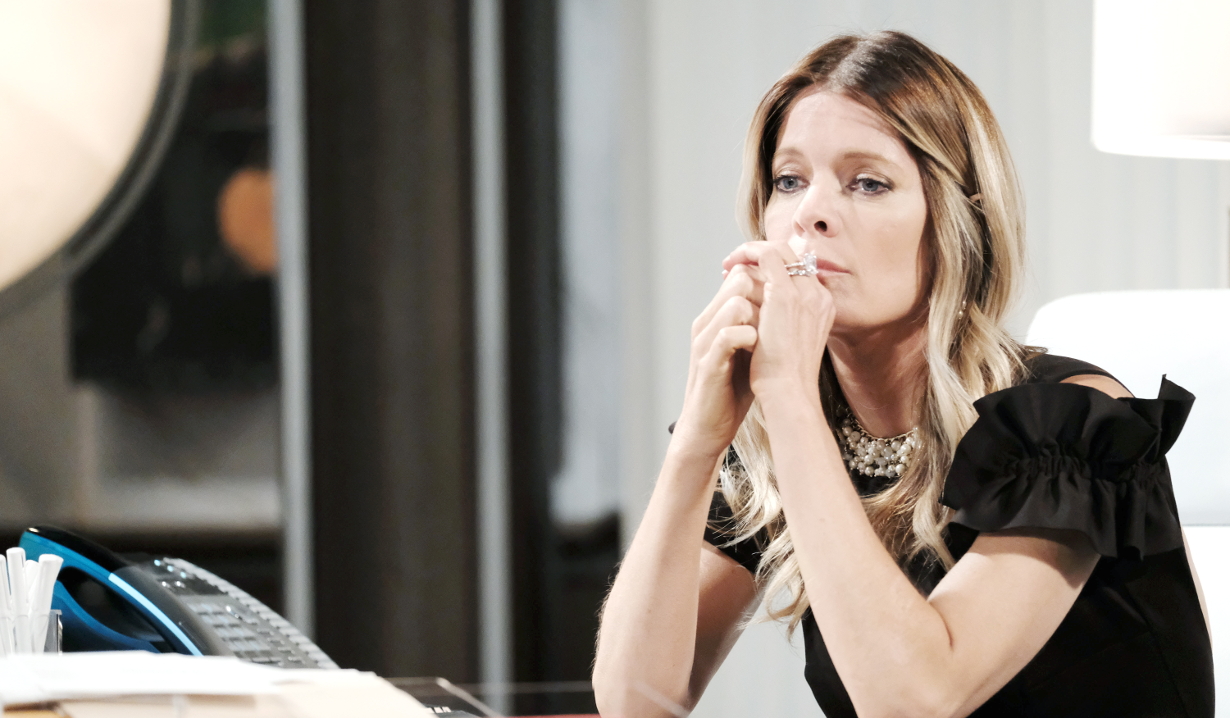 In the Crimson office, Maxie flips though outfits until Lulu corners her and wonders why she isn’t with her child. Maxie snaps at ‘mom of the year’ for teasing her. She reminds Lulu that she got her fired and has plenty of other reasons for being annoyed with her. Lulu thought they were pals again. Maxie explains that coming to the place where Nathan was shot reminded her again that ‘Little Miss Super Journalist’ ruined her life. Lulu complains that she’s losing count of how many times she has to apologize and apologizes again, claiming that she tried to lure Faison out for Maxie and Nathan’s sake. She accuses Maxie of playing with her emotions. Maxie shoots back that she’s a ‘self-righteous narcissist’ and throws a beach ball at her. Lulu throws one back and they clobber each other with pool noodles. Lulu nearly bludgeons her with some designer shoes. They start laughing and admit they don’t hate each other. Maxie knows Lulu isn’t to blame. She may not want her to suffer but seeing her happy only makes her more miserable. Dante will be back eventually, but Nathan never will. Lulu offers to give her space, but she’ll be there if she’s ever ready to see her again. They love each other no matter what and embrace. At the Quartermaine estate, Nelle gets off the phone with a lawyer about the prenup. Michael walks in and she tells him that a prenup is unromantic. He claims it was Ned’s idea and assures her he’s not planning a divorce; a prenup is just expected in the family. With a little prodding, she agrees to sign. He grabs the papers and goes off to file them. She looks worried. Later, Ned comes in and chats with her about the wedding. She tells him about the prenup. Ned explains that Olivia insisted on signing one, but it wasn’t mandatory. Once he exits, Chase calls and asks to see her.

Chase tracks down his brother at the hospital to talk about their father. The cop informs Finn that his parents are going to Europe instead of coming Port Charles. Finn holds Obrecht’s notebook in his hand. He’s about to say something about it to his brother when the detective gets a text and rushes off. Finn calls Anna and leaves a message, saying he’s on to something. Wyatt comes in with poison oak and Finn insists on treating him. After giving him some lotion, he shows the kid a picture of Peter on his phone. Wyatt doesn’t recognize him. Peter wakes up in the stables of Wyndemere with Obrecht. He starts screaming for help. That’s ineffective. Dr. O tells him she had lots of fun there with his father and fondles a riding crop. She’s eager to get his confession to the end so this will be over with. She notices that the notebook is missing. Liesl assumes she left it in the cabin. Peter guesses someone must have found it already and suggests she choose between her revenge and her freedom. Unphased, she insists on picking up where they left off in the story. He improvises, talking about babies and losing it all. Drew runs into Nina at the Metro Court and bluntly asks her what she’s been hiding for the past few weeks. He says that the August issue of Crimson hasn’t sold most of its ad space and this means they have to cut features from the next issue. Drew wonders what has her distracted. Valentin eavesdrops on them. Drew thinks Nina may be distracted by grief. She tries to reassure him and promises she will sell the ad space by tomorrow night. He wishes her good luck and takes off. Valentin strolls over to her. They start bickering about Charlotte. She gets a call from her ad team and is shocked. She confronts Valentin for buying the remaining ad space. He urges her to look at the ad. It’s a letter from him, apologizing and asking her back. She refuses to run that in her magazine. Nina knows he loves her but he’s a liar and can’t forgive him for what he did to Peter. Valentin is sure they can figure this out. He announces that he has to take care of something in the stables and leaves. She tries calling Obrecht, but she’s not picking up. Nelle meets shirtless Chase on the pier. He tells her that he really does have feelings for her but he’s sure that Michael and the Quartermaines want her. He asks if Michael has given her any reason to doubt that his commitment. Frazzled, she brings up the prenup. That sounds bad to him. Chase asks she not go through with the wedding and get back with him. He begs her not to marry Michael and suggests he’ll divorce her and take the baby. Taking her hand, he tells her how much he loves her. Nelle says things aren’t that easy and she can’t start over again. She hopes that he can move on because she has.

Back at the Quartermaine estate, Drew joins Michael and Ned for a toast. Ned says the prenup seemed to get under the bride-to-be’s skin. He runs off to get cigars. Drew asks Michael why everyone seems more excited about this wedding than he does. Michael claims it was the right choice. Drew congratulates him and hopes they can treat each other like family again.

Michael Makes a Shocking Request of...

Michael and Nelle Spy on One Another...