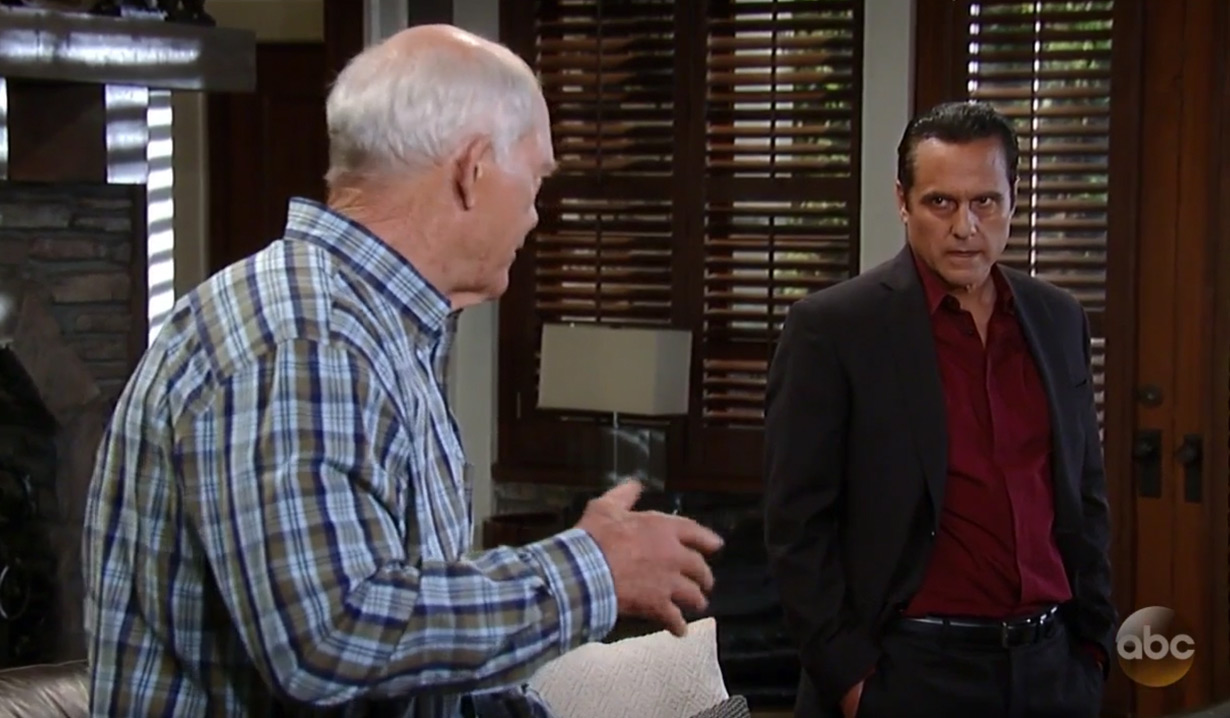 Milo visits with Mike and Sonny at the Corinthos place. As they talk, Mike’s memory slips and he forgets who Milo is. Sonny sends his dad to take his pills. Milo tells Sonny his dad seems to be doing well. He tears up and tells Sonny about his mom, who passed away two years ago from Alzheimer’s. Milo encourages him not to waste any time he has with his dad, and to ask for help when he needs it.

Milo gives Sonny some papers, which Max asked him to drop off pertaining to what he was looking into for him. Milo leaves to meet Epiphany, and Mike returns after taking his meds. Sonny questions his dad again about Croton and the missing body, which he mentioned he moved closer to home. Sonny wonders if his dad moved it to Port Charles.

Ava visits Julian at Charlie’s as Oscar and Kim come in for breakfast. Oscar is cold towards Julian when he takes their orders, and he later tells his mom that she should stop wasting her time with Julian and be with Drew. Kim informs Oscar that she and Drew spoke about him wanting them together, and they agree their past is in the past. Oscar pouts and decides to get to Aurora for his first day at work. After he leaves, Kim walks over to the bar and introduces herself. Ava suggests they all go on a double date to better get to know each other.

Franco meets Scott in the park to discuss Bensch and the case. Scott informs Franco that Bensch gave him some evidence that makes Kiki look bad.

Kiki talks with Alexis at the Metro Court restaurant about her case when Alexis gets a call from Franco. He lets her know that he just came across information that may hurt Kiki’s case. Alexis fills Kiki in on having a photo of her hugging Griffin, and that he plans to paint her as a floozy. She asks Kiki if there is any other dirt that could come out and blindside them in court. Kiki assures her there isn’t. Sam drops in to see Drew at Aurora and ask about Peter for her case, but he’s unable to give her any useful information. Sam has been worried about Drew and asks about the procedure to restore his memories. He admits he chose not to do it because it could hurt his kids. He’s decided to move forward instead of living in limbo and tells Sam the divorce papers came. He doesn’t understand why she wants to give up her half of Aurora. She cries that he made it for them to run together, but they aren’t together anymore, so they need a clean split. Sam returns her rings to him, and they both agree they are grateful for the love they shared and their daughter. Sam hopes he understands that she needs to stand on her own and start over.

Drew asks Sam to hold onto the rings because they represent real love and he wants their daughter to have them one day. They hug and Sam leaves. Later Oscar arrives, and Drew tells him everything he has planned for the day. Oscar wonders if his mother approved of today’s itinerary seeing they seem to talk about him behind his back. Drew scolds Oscar for his lack of respect and states he’s never betrayed his confidence. Oscar thinks Drew told his mom that he wanted them together, but Drew points out his feelings on that are obvious and Kim picked up on them. He tells his son that he and Kim are only together as his parents. Sam goes to the Metro Court to meet with her mom. Alexis knows the divorce papers came in and asks how she is doing.

Back in the park, Scott is furious with Franco for sharing privileged information with Alexis. Franco blows up because Bensch is a sexual predator and needs be stopped. Scott senses this is personal to Franco and offers to listen any time he wants to talk. Franco opens up about his childhood and what Jim Harvey did to him. Scott tells him how sorry he is, wishes he could have been there for him, and they share a hug.

Kiki meets Griffin at GH and asks to speak to him, but not at the hospital.

In the park, Scott overhears Kiki and Griffin talking about having sex.

At Charlie’s, Julian tells Kim about his plans to tear down some walls and expand.

At Sonny’s, Sonny realizes Mike turned to Charlie Delaney and they hid the body in the pub. Mike swears someone would have to dig up the foundation to find it.

Maxie suggests to Lulu they can help each other out like old times.

Alexis walks in on Griffin telling Kiki she owes it to Alexis to tell her the truth.

Ava informs Nelle that she’ll defend herself by whatever means necessary.

Chase and Jordan discuss a potentially risky plan with Michael.

Peter asks someone if they told anyone he was here.

Sonny informs Jason of a new fire they need to put out.