Monday July 2, 2018: Michael and Nelle announce their engagement, Peter has a visitor, and Chase tells Jordan his plan. 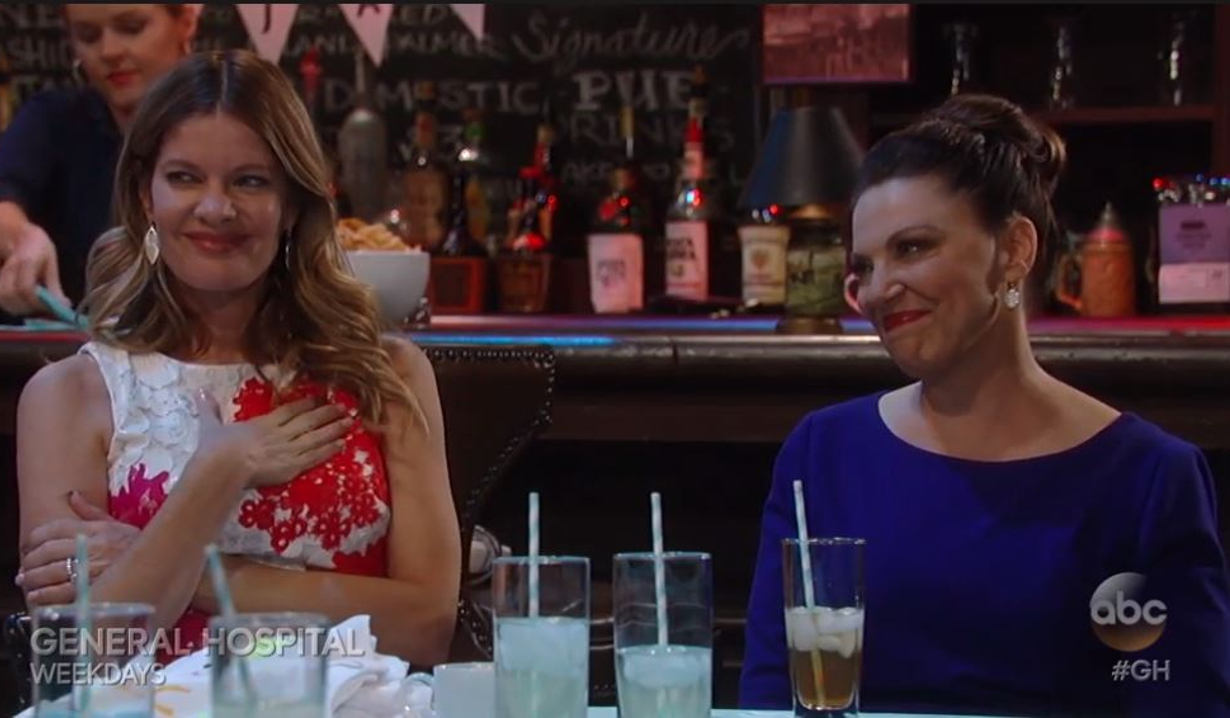 At Charlie’s, Maxie thanks her guests for all the gifts that they have given her child. Liesl manages to stop herself from making a speech. She and Nina head to the bar and Obrecht assures her that no one will find Peter. Curtis arrives and spots Nina. She hasn’t been returning his calls and he wants a word. He explains that they still don’t know much about Peter’s disappearance but have a theory. Once he’s stepped away, Nina worries but Obrecht tries to reassure her.

Meanwhile, Maxie grills Sam about how the search for Peter is going. Sam wonders if she really wants him found. Maxie still wants him to pay. Lulu and Bobbie have to go and exit. Maxie gets back to grilling Sam, who admits that one of Peter’s enemies might have come for him. Curtis joins them and they talk about whether someone loyal to Faison might have killed Peter. This seems to bother Maxie. She decides to go home to focus her energy on the baby. Curtis informs Sam that he has footage of Peter leaving the hotel in a laundry cart.

More: Spoiler digest, tall tales and the truth comes out

In the cabin, Peter yells out for help. Wyatt, (played by Patrick Gibbons), a Raging Raccoon, opens the door. Peter begs him for help and offers to help him earn a badge for life saving, courage and community service. Wyatt is unconvinced. Peter begs him to bring a grown-up. The kid says he needs to go to the fireworks but might bring back some smores. He forgets his bugle. Later, Nina and Obrecht arrive and find August sleeping. Liesl gives Peter some antibiotics and asks him what they missed. Nina continues to worry that this has gone on for too long. Obrecht says this will go on as long as it takes and storms out. Peter warns Nina that there are too many loose ends and she needs to stop this before it’s too late. Nina says that Obrecht has never paid for anything and won’t start now. Peter points out that that leaves her holding the bag. Obrecht returns with a bag of cake. Distraught, Nina leaves and Liesl prompts Peter to continue their work. He warns that the story won’t end the way she thinks.

Sonny and Jason are at the restaurant. Stone Cold shows him the evidence that Spinelli dug up. He’s sure that Nelle must have left more evidence behind too.

At the Quartermaine estate, Michael gives Nelle a ring and suggests they make things official. She can’t. The ring reminds her of what she lost with Zack. She feels like she’s never been allowed to be happy. Michael doesn’t want to hide from fate or his family and promises she won’t have to worry. He slips the ring on. Soon, family and friends gather, and Michael informs them of the engagement. He tells them that he wants their child to be part of a large and nurturing family. Everyone looks uncomfortable. Ned thinks it’s sudden and Bobbie says it will happen over her dead body. Sonny, however, gives his son a hug and hopes he knows what he’s doing. Jason doesn’t like this either but it’s Michael’s choice. He wishes them all the happiness they deserve. Everyone is even more uncomfortable when Nelle and Michael announce that they are planning to get married very soon. Joss supports the wedding and Nelle assures her she wants Carly to come home and be with them. Nelle asks Joss to be her maid of honor. This outrages Bobbie who drags her granddaughter out. Everyone exits aside from Michael, Sonny and Jason. Michael assures them that he can look after the situation.

At Ferncliff, Carly exercises in her cell while her neighbor continues knocking on the wall. She uses her App to interpret it. She tries sending a message back. Kevin shows up and asks if the patient next door has been upsetting her again. She wonders if she should be worried about them. He admits they are dangerous and delusional. The shrink is not crazy about her using the insanity defense but urges her to use her time there to work on herself. Carly doesn’t want to revisit her pain. Later, Nelle stops by for a visit and gloats that she has good news.

At the PCPD, Chase informs Jordan about his potential conflict of interest in Nelle’s case. He puts his badge and gun on the desk and assumes she wants him out for opening a cold case without permission. It seems to Jordan that he is doing good work and she asks what he needs. He needs permission to finish the case from Maine. Chase says that he’s a better cop than he used to be and Nelle can’t manipulate him anymore. He assumes she still thinks he’s infatuated with her. She worries that his plan could be fatal, but he promises that nothing will go wrong.

Franco gets some reassurance.

Liz Is Shocked Her Childhood...

Nelle Visits Carly to Gloat About...