Liz Is Shocked Her Childhood Boyfriend Terry Is Now a Woman

Friday June 29, 2018: Maxie is surprised with a baby shower, Peter suffers from delusions, Kevin warns Carly about the patient in the next room, and Franco asks Drew to be his best man. 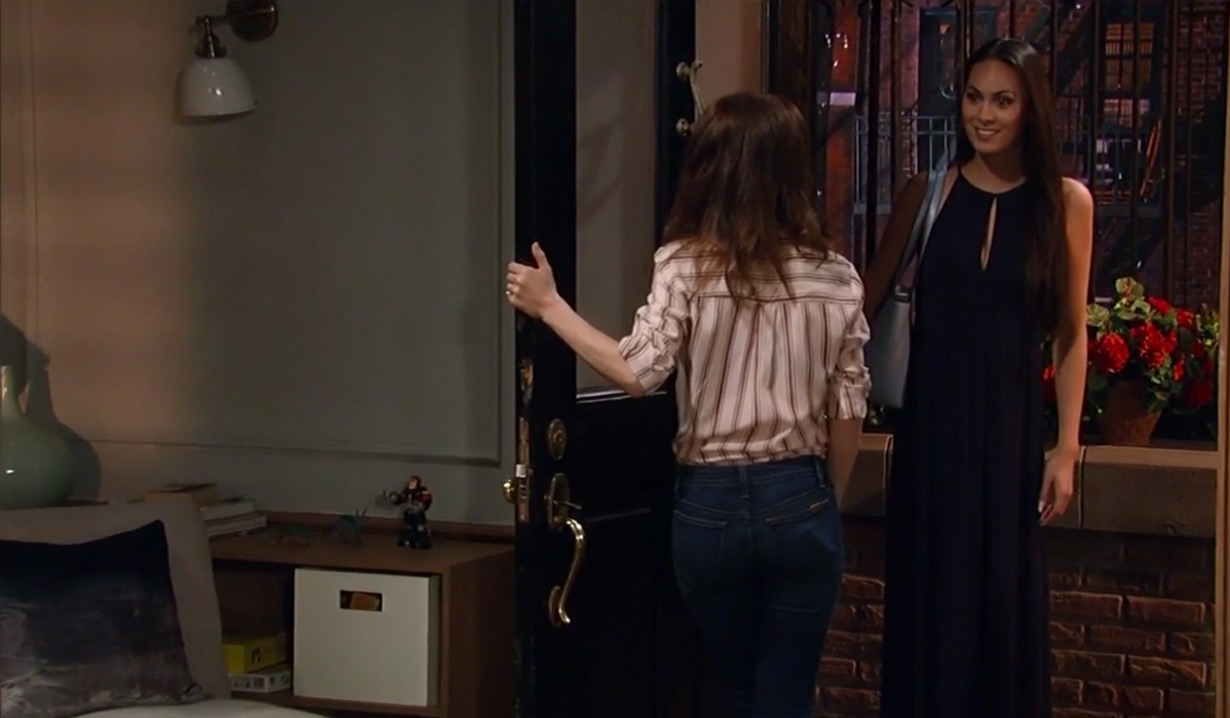 Sam and Jason arrive at the PCPD to acquire the flyer from evidence. Sam tells Jason to let her handle this and heads inside.

Franco returns home to Liz’s place and finds Drew there. He wonders if Drew is trying to talk Liz out of marrying him, but he came to accept the invite to their wedding. Franco only invited Drew to be polite and he knows they aren’t friends, but Drew feels they are after what they’ve been through. Franco skates around the idea of asking Drew to be his best man, to which Drew says yes. Suddenly, Liz gets a text from Terry, her best friend from Colorado. She says she shared her first kiss with him and now he’s coming to Port Charles after finding her on social media. She tells Drew and Franco that Terry came from the perfect family and was so well adjusted, unlike her. She joked they used to claim they were soul mates, but they drifted apart when she moved to Port Charles to live with her gram. Franco becomes uncomfortable, and Liz assures him that he has nothing to worry about with Terry. Drew suggests he and Franco go grab a beer.

Felicia takes Maxie to Charlie’s for her baby shower, where Bobbie, Lucy and Lulu welcome her. However, they have no idea where Obrecht and Nina are. Maxie learns about Dante’s WSB assignment. She asks Lulu if she’s okay, which she isn’t, but Lulu knows she has plenty of support in town.

At the cabin, Peter is suffering from a fever and delusions, but Obrecht tells Nina he’ll be fine and isn’t going to die while they are at Maxie’s shower. They leave, and Peter has delusions that Maxie finds him and gleefully watches him suffer. After his vision of Maxie fades, Peter hears someone open the door to the cabin.

At Ferncliff, Kevin checks on Carly to see how she is doing. She confronts him about Jason’s firing, and Kevin admits he told Mary Pat about Jason. He had to because if Mary Pat figured things out on her own then she might have gone to the board, and he could have lost his privileges there. He has other patients and can’t risk their health just so Carly could have her best friend with her. Carly doesn’t like it but understands. They talk and Carly brings up her neighbor, who keeps tapping morse code to her. He advises her not to engage them because they may be dangerous, and he will try and have her transferred out of this wing. Kevin has to leave, and once gone, the patient begins tapping out SOS again.

Spinelli meets Jason at Sonny’s restaurant, and soon Sam arrives with the flyer from the evidence room at the PCPD. Sam explains she was able to get it because she and Curtis are doing jobs for the PCPD, and she brings Spinelli up to speed on her new business with Curtis. After Sam leaves for Maxie’s shower, Spinelli admits to Jason he’s a bit disturbed that Sam has replaced him with Curtis, but he is happy that she’s divorcing Drew. He also feels Sam is more herself with them, and perhaps there is hope for Sam reuniting with Jason. Right now, Jason wants to focus on proving Nelle wrote the note to trap Carly. Spinelli sprays the note with a solution, and eventually the message from Morgan reappears on the flyer. Jason states they have proof that Carly wasn’t lying.

Nina and Obrecht arrive at Charlie’s, and Obrecht claims they were late due to securing supplies for the party. Sam arrives, and Maxie reveals to everyone that James is going to be able to come home tomorrow. Maxie thanks the group of strong women for giving her so much support, and says she knows Nathan is there with them in spirit. Nina downs drinks to calm her nerves, and Sam notices the looks Nina and Obrecht keep giving one another. As the party winds down, Julian makes a comment to Obrecht about running into her in the woods and hopes her weird primal screaming therapy has helped her grief. Nina nervously drags Obrecht out of the bar, but not before Sam overheard the comment about the woods. Outside, Obrecht tells Nina the story she told Julian and Kim to cover the screams, but Nina fears if they came that close to finding Peter then someone else might too. Meanwhile, Franco and Drew arrive, and Drew tries to make Franco realize he has nothing to be worried about where Liz and Terry are concerned.

Back at Liz’s place, a woman knocks on Liz’s door. She answers and asks if she can help her. The woman says, “Liz, it’s me, Terry.” Liz is shocked, and hugs her old friend Terry (played by Cassandra James).

Jordan asks Chase what he needs.

Curtis wonders to Nina who has Peter if not Valentin.

Peter begs the person at the cabin door to help him.

Maxie asks Sam what the plan is.

Michael wonders if Nelle has changed her mind about marrying him.

Carly asks Kevin if she should be worried about the patient next-door.