Bensch Snaps a Photo of Kiki and Griffin Together

Thursday June 14, 2018: Griffin intervenes between Kiki and Bensch, Kevin helps Alexis deal with her past, and Jason gets a job at Ferncliff. 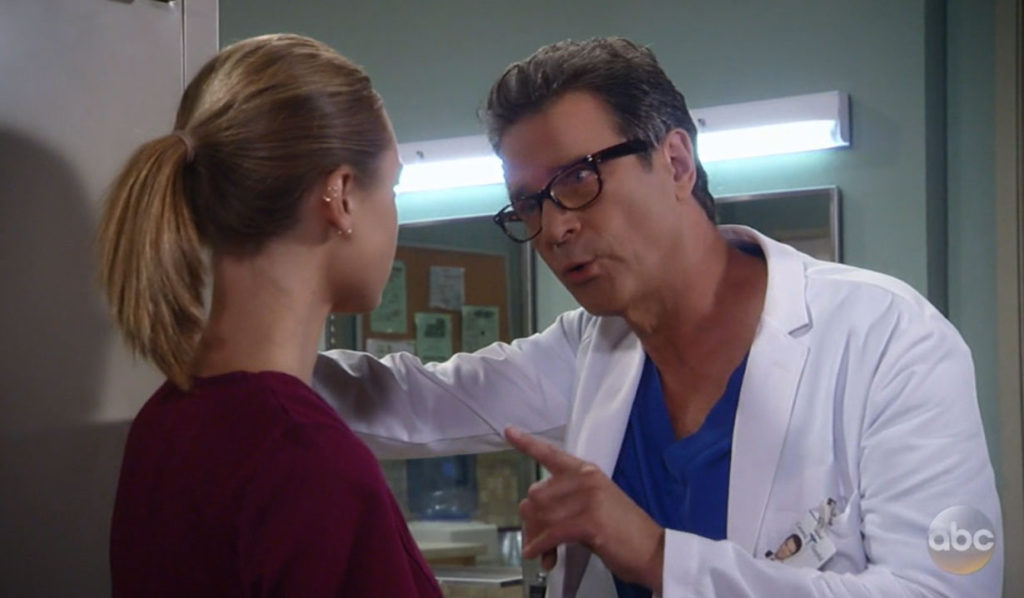 At Wyndemere, Sam discovers an invoice for one of Valentin’s planes and suspects he used it to get Peter out of the country. She calls the company and pretends to be Nina inquiring about her husband’s schedule, but gets nowhere with them.

At The Floating Rib, Valentin won’t give Nina a divorce or let her go without a fight. They argue. He begs for thirty days to prove himself honorable to her, and if she isn’t convinced then he’ll sign whatever papers she wants. He leaves, and Nina notices messages on her phone and exclaims, “Crap!” She fires off texts, and thinks about her past with Valentin.

Alexis meets with Kevin in his office at GH. She tells him about receiving her mother’s watch, the photo of her, and the record of her singing. She likes having the mementos of her mother, but still doesn’t know why she chose to stay with Mikkos and be his mistress given the man he was. Kevin suggests she may have been in love. Alexis thinks that love got her killed, and notes she is living a similar life to her mom. She wonders if being attracted to dangerous men is in her DNA. Kevin wants to help her get closure with the persons at the root of her issues. She reminds him that her parents are dead, but he thinks she could bring one of the men she’s been involved with in to discuss their relationship and see if there are parallels to her parents. Alexis goes down the list of her past relationships: Sonny is busy, Ric hates her and Jerry is on the run. He points out there is Julian, so she agrees to consider it.

In the hall, Liz gets a surprise call from her sister Sarah congratulating her on the upcoming wedding. However Sarah is too busy to fly out for the wedding. Liz confronts Franco about calling Sarah. He doesn’t understand why she hasn’t told her family about the wedding, and can’t fathom them not wanting to come. She says there is no room in their lives for her because her parents and sister’s lives revolve around their work. She thanks him for trying and gets back to work. Franco calls Sarah back and asks for her parents’ contact information.

In the locker-room, Bensch confronts Kiki and they argue. He tries to claim she sent him mixed signals, but she states he is a harasser and needs to be stopped. She warns Bensch she’s looking into legal actions. He laughs and tells her it will only lead to no male doctors wanting to work with her and it will end her career. Griffin storms in and throws Bensch against the lockers and screams, “That’s enough!” Kiki tells Griffin to let Bensch go, and Bensch leaves. Griffin wishes she had come to him about this. She couldn’t because of what happened between them. Griffin knew their having sex would complicate things, but she can still lean on him. She can’t, and doesn’t want his help. Back in the hall, Bensch looks at a photo on his phone he snapped of Kiki and Griffin hugging and smirks.

At Ferncliff, Mary Pat (played by Patricia Bethune) shows Jason around the grounds. In her cell, Carly goes into a drug induced daze from the pills she’s forced to take. She hears Mary Pat speaking to Jason outside her cell and makes her way to the door to see Jason. Jason gives her a nod. The orderly walks by and sees Carly standing at the door, so Mary Pat tells him she’ll need a higher dose of meds. Mary has decided to hire Jason and asks him to start immediately, which he agrees too. Meanwhile, Kevin enters Carly’s cell and is shocked by her state. He asks if she is okay and how many meds they have her on. She wonders if he is real. He assures her that he is and will do everything he can to help her.

Back at Wyndemere, Curtis gets a message from Nina that she couldn’t stall Valentin any longer. Later, Valentin returns home and blurts out, “You two aren’t nearly as stealthy as you think.” Sam and Curtis emerge and confront him with the fact that they know he chartered a plane the night Peter escaped. Valentin claims Peter stole his phone that night and tried to charter the plane himself, but never used it. Sam and Curtis leave, and Sam theorizes to Curtis that Peter is still in Port Charles.

Alexis returns home and looks at the old photo of her mother. She listens to the recording of her and glances at her mother’s watch on her wrist.

Sonny is shocked by Mike’s words.