Wednesday June 13, 2018: Franco and Ava are upset about Kiki’s situation, Mike mentions a body, and Nina asks for a divorce. 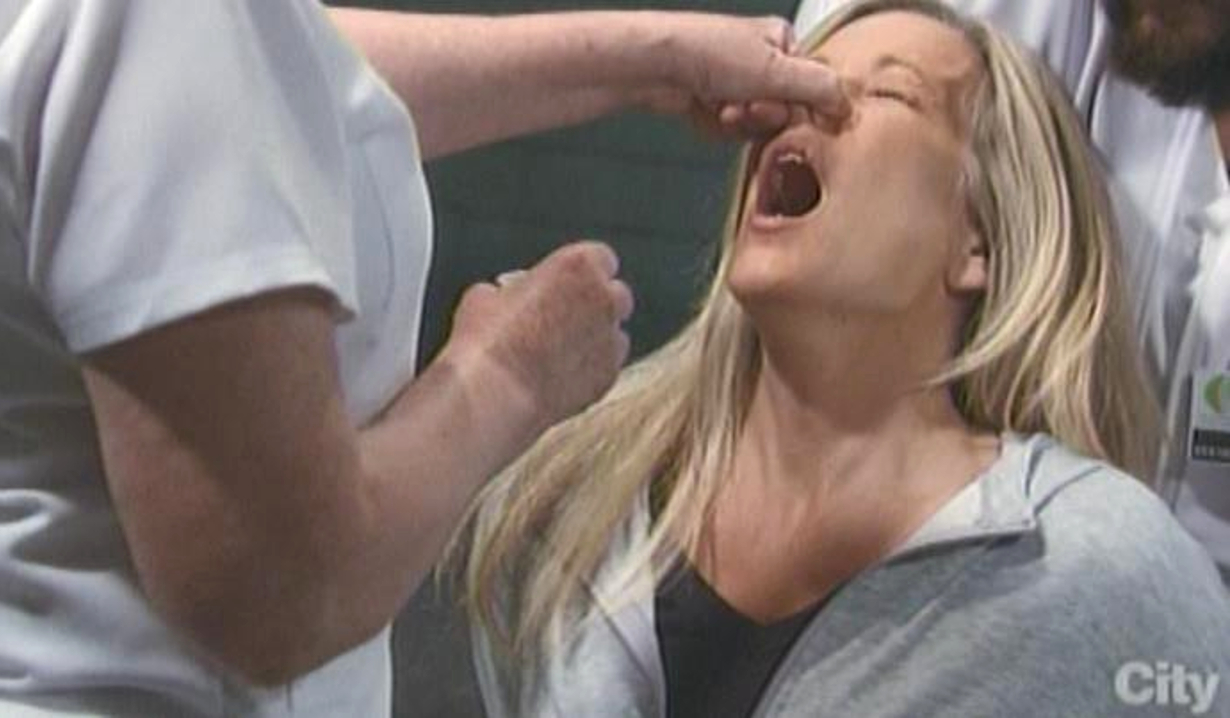 Sitting in her cell in Ferncliff, Carly recites a mantra about staying strong. Nurse Mary Pat interrupts and starts patronizingly telling ‘Caroline’ how things work there. She points out that, due to overcrowding, Carly is in the wing for the most dangerous patients. The nurse shows her the rule book and warns that disrespect won’t be tolerated. Carly agrees to co-operate and an orderly is called in with medication. It doesn’t go over well when Nurse Mary Pat, (played by Patricia Bethune), says Carly must take anti-psychotics and lithium. They catch her trying to hide the pills under her tongue. Mary grabs her nose and force feeds the pills to her. Soon, Carly crumples up on her cot.

Nina joins Sam and Curtis at The Floating Rib. They need her help catching Peter and bringing him to justice. She’s reluctant but agrees. At Wyndemere, Valentin puts on a record and calls Alexis over. When she arrives, she notices the record playing is her mother singing. He explains the record was made only for their father and gives it to her. Valentin shows her a photo of her mother to prove that the watch she has was hers. Nina calls him and asks to meet. Back at The Floating Rib, Nina gives Curtis and Sam the security code for Valentin’s place. She’s not sure they are going to find what they are looking for. She gets a text from Obrecht saying that their ‘guest’ needs more meds. After the PIs leave, Valentin arrives and starts doling out compliments. Nina bluntly tells him she’s done with being his wife. He says he would give her the world, but not that. At the hospital, Ava bursts into Griffin’s office after reading the harassment article and asks him if it’s the reason he’s been inseparable from Kiki. He insists he didn’t know until now. Ava beats herself up for being a failure as a mother. The doctor assures her she’s not, so she asks for his help burying whoever has been harassing her daughter. She wonders why he’s being so secretive about her daughter. Kiki shows up and her angry mother asks her to name names so she and Julian can take care of this. Her daughter won’t and walks away. Ava chases her around and demands to know what’s been going on. Kiki explains it’s been confusing and she didn’t want her mom getting involved. She points out that her mother treats sex as a strategy and weapon. Ava accuses her of being judgmental and her daughter accuses her of undermining women like her. Ava claims that being with Griffin has made her a better person. Kiki doesn’t buy it. In the locker room, Franco yells out as he reads the article about Bensch, who suddenly appears. Franco doesn’t explain. When he sees how stressed the doctor is, he offers to massage his neck and starts questioning him about Kiki. Franco gets more threatening and the doctor suggest that the artist’s history makes him more likely to be a predator. Liz interrupts and splits up the men. Bensch leaves. Liz wonders if Franco is upset because of Kiki or if this is really about him. After she calms him down, she goes back to work and he looks at a text from Sarah Webber. Over at the nurses’ station, Jason picks up some paperwork from Liz. Meanwhile, Ava returns to Griffin’s office in tears and he tries to comfort her. Back in the locker room, Kiki comes face to face with Bensch.

More: News for all four soaps

Alexis goes home and listens to her mom’s record. At the restaurant, Sonny gets angry as he tries making arrangements over the phone. Jason sits down with Mike, who is obliviously doing a crossword. Sonny sits down with his father so they can talk over ideas to bring Carly home. Mike doesn’t understand what’s going on. After it’s vaguely explained, he suggests they break her out of Ferncliff. Sonny says they need to do this legally. When Jason takes off, Mike starts asking him about where he met Jason. He says that he seems like a heartless enforcer. Getting upset, Mike tells him he shouldn’t be wasting time with thugs. As they chat, Mike mentions driving a body around in his car.

Jason goes to Ferncliff and meets with Nurse Mary Pat for a job interview. He has a fake resume and claims he’s looking for custodial shifts.

Curtis and Sam sneak into Wyndemere and find the secret passage behind the bookcase. He searches around in there but comes up empty. When he returns, Sam shows him some paperwork she’s found.

Carly has some self-doubt.

Kiki gets an unpleasant surprise.

Chase Accuses Nelle of Playing Him...

Bensch Snaps a Photo of Kiki and...