Tuesday June 12, 2018: Obrecht prevents Peter's escape, Nelle's past with Chase is revealed, Oscar spends time with Drew, and Kim and Julian plan a trip together. 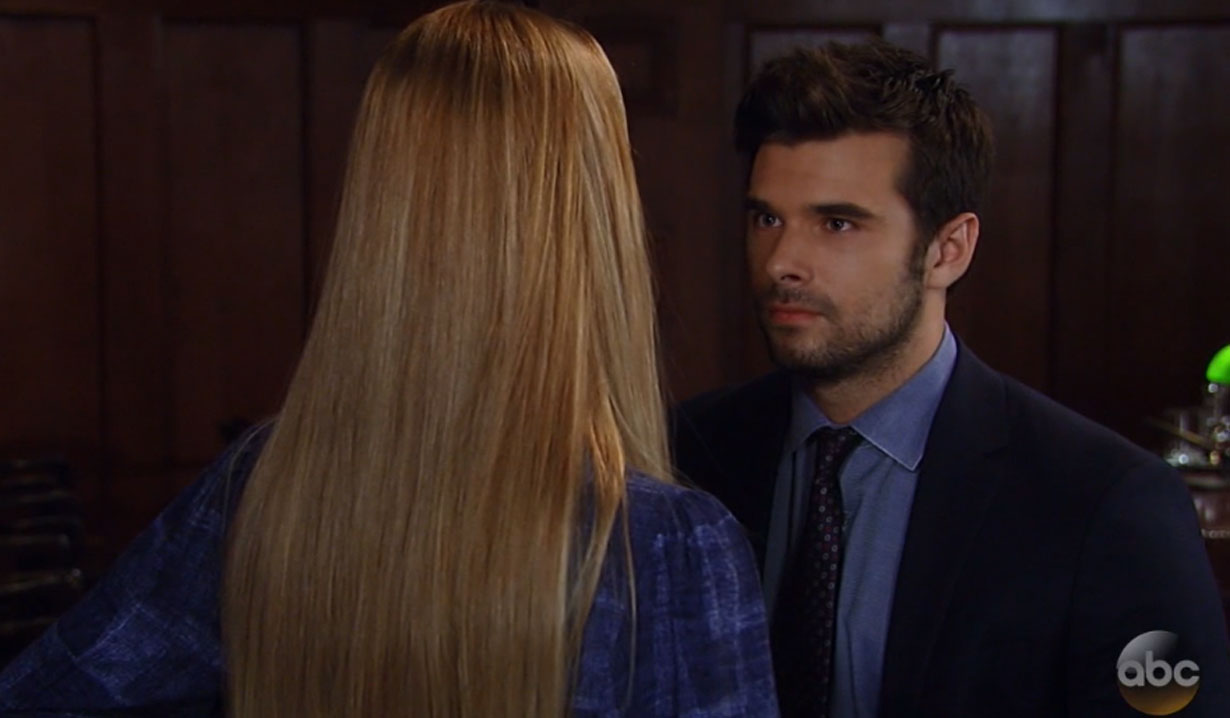 Jason plays pool at The Floating Rib where he runs into Sam. She asks about Carly, and Jason tells her that she’s been sent to Ferncliff again. He details her first time there after she shot Tony Jones which led to her spending four months in the place. He blames himself for not seeing Nelle’s games earlier. Jason worries that Carly won’t sit still in Ferncliff and will do something to make her situation worse. Sam warns Jason not to even think about getting himself sent there to help Carly. He won’t, but he has an idea how to help Carly. Chase confronts Janelle, aka Nelle, in the empty court room and notes it’s been a long time. He had to testify in Carly’s trial earlier and was shocked to hear the victim was her. Nelle acts tired and complains that relieving what Carly did to her was very traumatic. He wonders if it was more traumatic than watching her fiancé drown in a kayak. Chase recalls being the lead in the case of her former fiancé’s death, and how he happened to fall in love with her just as the evidence against her was stacking up. Then someone reported him for inappropriate behavior. Suddenly he was fired, and the case was thrown out, which he thinks was her plan all along. Nelle cries that she never used him, and he helped her through her grief in losing Zack. He can’t help but notice she’s latched onto another member of an elite family, this time the heir to two fortunes. Chase relays how he had to start from the bottom in his career after she trashed it, but he put in the time, retook detective exams and when the job in Port Charles opened up he took it. He remarks it’s a small town and he’ll be seeing her around. At the Quartermaine mansion, Spinelli gives Michael a flash drive that will hack into Nelle’s computer and install spyware, so they can monitor everything she does. Spinelli leaves, and Joss arrives to ask Michael what happened to their mother. Michael brings her up to speed on Carly being sent to Ferncliff but promises everything will be okay. At the cabin, Peter is able to reach a piece of broken glass from the vase Obrecht threw at him and tries to cut through his bonds. Outside, Obrecht speaks with Nina over the phone and tells her to return to the cabin at once. She hears Peter knock over something, rushes in and thwarts his attempted escape. She grabs a baseball bat and decides to prevent any further attempts to escape. She raises the bat and brings it down as he screams.

In Kim’s office at GH, Drew arrives to pick up Oscar, who is spending the weekend with him because Kim is going away with Julian. In the hall, Julian runs into Lucas on his way to meet up with Kim. He gives his son all the information he’s been able to dig up on his birth mom Bianca, and he included what he knows about his own family the Jeromes should he want it. Julian also suggests Lucas and Brad consider hiring a PI to find out who the mystery birth mother is, but Lucas insists on playing by the rules. Kim meets Julian and Lucas takes off. Julian asks where they are headed on this trip, and she reveals they are going camping. Kim just has one more case to handle before they can leave. Julian asks Kim if a birth mother is going to give her child up for adoption anonymously, would her name be in the medical system. Kim said it would up until she gives birth because she’d still be a patient. At Maxie’s, Nina tells Maxie she needs to go because Obrecht is having a hard time. Spinelli and Georgie (played by Lily Fisher) drop by later, and Spinelli asks how she’s doing. She laments how Peter made a fool out of her. Spinelli advises she not waste time on the negatives. When Georgie brings her a photo she’s drawn for James, Maxie realizes she needs to focus on the good in her life.

Nina returns to the cabin to discover Obrecht has bashed Peter’s arm with the bat. Nina tends to him, and he warns Nina that Obrecht will only bring her down with her in this crazy scheme. Obrecht chastises Nina not to forget what Peter did to Nathan and Maxie. Drew and Oscar arrive at the mansion, and a crying Joss throws herself into Oscar’s arms. Meanwhile, Michael loads Spinelli’s spyware on Nelle’s laptop just as she returns home. Michael asks her why she seems so jumpy. Nelle reveals she ran into someone she knew from Florida at the courthouse.

In his apartment, Chase looks at an old photo of him and Nelle.

Kiki meets with Lulu and is ready for whatever comes her way.

Franco roughs up Bensch in the GH locker-room.

Ava asks Griffin if this is why he and her daughter have been inseparable.

An orderly goes over the rules of Ferncliff with Carly.

Jason and Sonny talk with Mike about using his idea to bring Carly home.

Carly is Sentenced and Nelle’s...