Carly is Sentenced and Nelle’s Victory is Cut Short

Monday June 11, 2018: Peter tries to talk Obrecht around, Anna and Finn share some pillow talk, and the judge reaches his verdict. 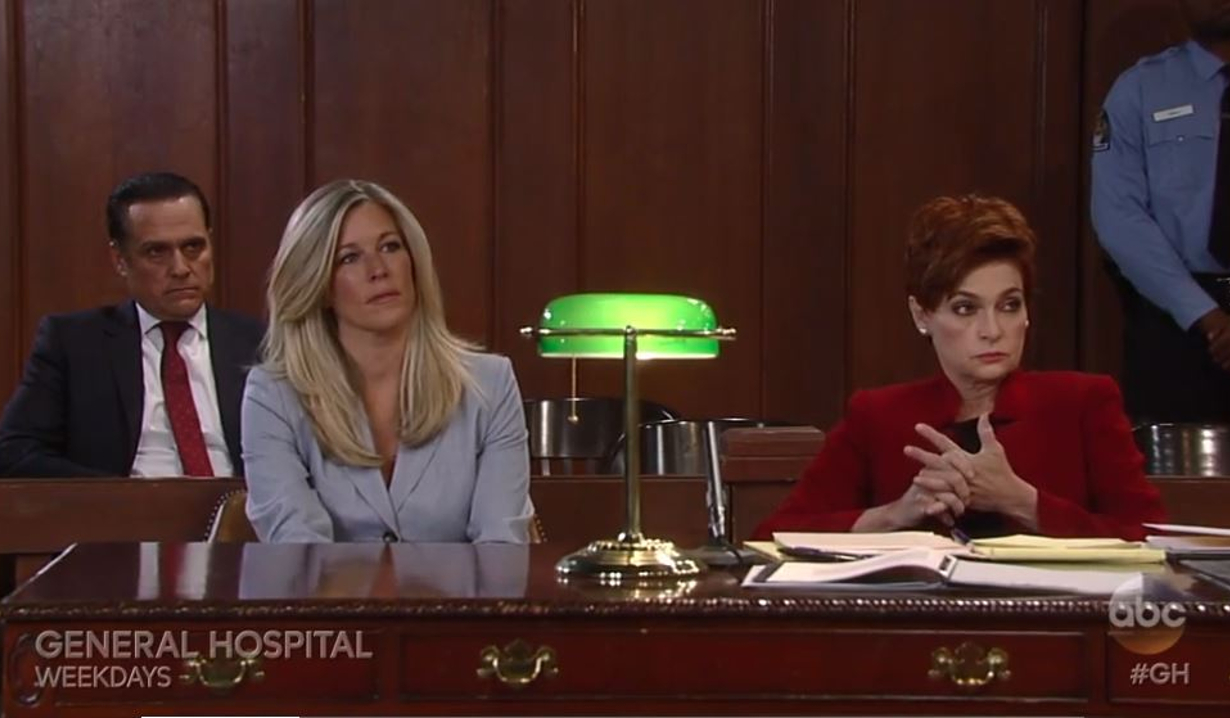 In Anna’s hotel room, Finn apologizes to her. He’s about to leave but she asks him to stay. This flusters him. He warns her that he’s not a ray of sunshine. They decide to just have breakfast before the flight and he leaves. She sits in bed and tries to read. Eventually, Finn calls to bid her goodnight. When she claims she can’t sleep, he suggests he has a hands-on remedy that could help. The flirty banter continues. They talk about their past mistakes. She remembers what they planned for New Year’s and wishes she could ring it in with hope and joy. When she no longer hears his voice, she suspects he’s fallen asleep. She runs to the door and he’s standing there. He wishes her happy New Year and they have sex. Nina goes to the cabin and finds that Obrecht has been torturing Peter with a recording of ‘Three Blind Mice.’ Liesl shoves flowers in his face as he barks about being tortured. Nina calls her off. She still hates Peter but worries about his treatment. Dr. O drags her outside and they argue about justice and vengeance. Obrecht suggests she pay Maxie a visit to get reminded of why they are doing this. After Nina departs, Peter starts to taunt Obrecht about Fasion’s obsession over Anna. The doctor tells him to stop talking about the ‘scarecrow’. Peter wishes that Liesl was his mother. He explains that Nathan’s death was Anna’s fault and asks Obrecht to help him make Devane pay for it. This only makes her distraught. She screams that he is making empty promises of revenge and hurls a vase that smashes over his head. Obrecht demands that he confess to his crimes. After she storms out, he spots a shard of glass on the bed by his hand. Chase drops by Maxie’s with the bag she left in his car. They talk about the nursey. When she looks in her bag, she finds the necklace Peter gave her. She beats herself up for believing that Peter’s friendship was real. When she drops it in the trash, Chase suggest Nathan would prefer she give it to charity. She agrees. Before he leaves, he tells her that the world is full of liars. She wonders who he is talking about. As they chat, Nina barges in. They discuss the necklace and Chase suggests they use it to track Peter down. Nina suggests he could be somewhere nearby. Chase gets beeped back to work and takes off. Nina stares at the baby’s birth certificate. Maxie wonders why she is being so weird. With tears in her eyes, Nina tells her that whatever happens to Peter, he has it coming. In court, DA Margaux Dawson asks Jason if he believes Carly was actually insane when she attacked Nelle. He can’t answer. The lawyer pushes. He remembers promising to have Carly’s back and tells the court he’s not qualified to have an opinion. Diane has no questions for him. Margaux makes a speech about how much Carly has to pay for what she did. When Diane has her turn, she claims that Carly snapped and asks the court for compassion, so Carly can get the help she needs. The judge wants to get this over with and declares a recess, so he can deliberate. Diane tells Jason he was perfect. Margaux tells Diane that the insanity defense was a brilliant ploy. Sonny tells the DA not to come after his family. At the Quartermaine estate, Michael tells Nelle how hard it will be on their kid to be without a grandmother. Nelle would like to help but it’s out of her hands. When she goes upstairs, he calls Spinelli to make arrangements. Nelle returns and startles him, wondering who he is on the line with. Later, Margaux calls Nelle and warns her that the trial is not going well. Nelle tells Michael that they should take a walk to the court house rather than sit and wait for the verdict. Back at the court house, the recess ends and the judge returns with his verdict. He declares Carly not guilty by reason of insanity. Diane thanks him and says arrangements have already been made for her client to go to Shadybrook. Margaux demands that Carly receive a more severe sentence. That demand doesn’t impress the judge. He says that Carly has shown no remorse and broke appointments with her doctors. He orders her sent to Ferncliff until she is deemed sane and unthreatening. This freaks Carly out. Sonny promises Carly that he’ll take care of Nelle, who looks over at them with a smirk. Carly is taken away. Diane tells her family that this isn’t over. Jason refuses to wait around. Alone, Nelle congratulates herself. She’s going to get everything she ever wanted. She’s startled to turn around and see Chase. “Janelle, it’s been a long time,” he says.

Carly sits in her cell and tells herself that she’s going home, whatever it takes.

Jason tries to figure out his situation.

Nina is on edge.

Kiki is forced to face her problems.

Jason Hesitates on the Stand During...

Chase Accuses Nelle of Playing Him...