Jason Hesitates on the Stand During Carly’s Trial 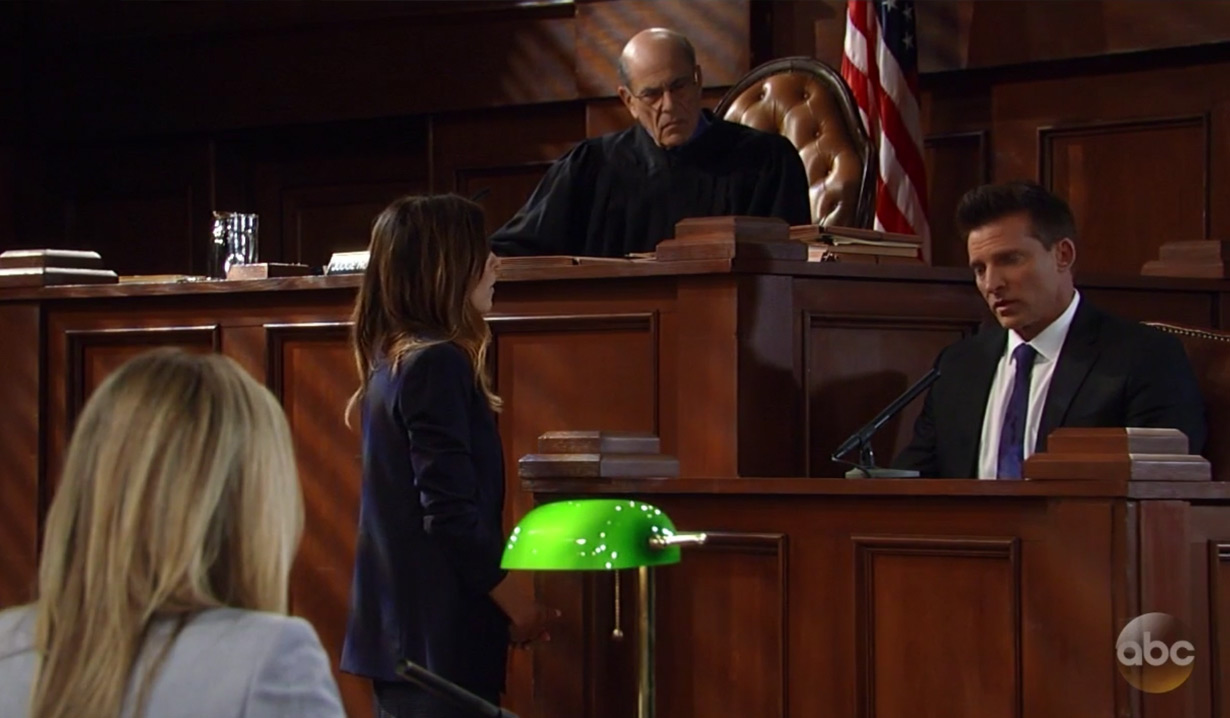 In court, Diane begins her defense of Carly and summons Griffin to the stand. Outside of the courtroom, Michael insists Nelle return home because this is too stressful for her, and she convinces him to come with her. Back in court, Griffin details Carly coming to him about suffering from hallucinations, which she insisted were real. His tests revealed no brain trauma was causing them, so he referred her to Kevin. Kevin is called to the stand, and explains he put Carly on an anti-anxiety medication, the side effects which could have caused her to lash out and not be in control of her actions. Chase is called to the stand and testifies about Carly reporting a break-in at her house, which he found no evidence of, and finding Carly at her son’s grave after claiming a note from him led her there. Diane asks if Carly seemed emotionally disturbed, which he believes she was. Diane calls Sonny to the stand next. Sonny testifies that he’s been so wrapped up in caring for his ailing father that he didn’t see Carly’s own issues and that she was losing touch with reality. Jason whispers to Carly that if she fires Diane it will lead to a mistrial and that will give him the time he needs to get the proof against Nelle. Diane finds out what Jason is suggesting and warns against it. The trial continues, and Diane calls Jason to the stand. She questions him about the phone calls tormenting Carly, and the mystery of the missing bloody scarf. Diane asks if Carly was hopeful Morgan was still alive, and he admits she was. The DA cross-examines and asks if he believes Carly had been behaving irrationally for weeks. He claims he doesn’t understand what she is asking, so the DA asks if he can swear that Carly was insane when she assaulted Nelle.

More: Lily Fisher back on GH as Georgie Jordan and Curtis have drinks at the Metro Court bar. Jordan just met with the mayor and she may have to step down if she can’t find Peter August. He offers to help her, so she hires him and Sam to find Peter. At GH, Alexis drops by to see Monica in her office and discuss the Bensch issue. Monica can’t discuss the matter, but offers to help keep Kiki out of Bensch’s orbit. Alexis states that won’t be enough for Kiki, and warns Monica that Kiki is taking her story public. Later, Alexis drops by Kevin’s office to talk. She admits the thing with her father is getting to her more than she thought it would. Alexis has the envelope from Valentin and opening it scares her. Kevin advises her that Mikkos has no control over her anymore. She leaves his office, but finally opens the envelope in the hall. Inside she finds a silver watch. In San Diego, Finn drops by Anna’s room to talk about her meeting with Robin. Anna relays Robin’s horror to learn about Peter, but she didn’t judge her. Still, she feels something between them has been lost, and that she broke Robin’s trust. Finn tells her that she’s not alone because he hasn’t been forthcoming about his own family and past. He explains running into his father at a coffee shop, who he hasn’t seen in twenty years. He details that his father remarried a much younger woman weeks after his mom died, and he was still cleaning out his mom’s things when she gave birth to Chase. He took his mom’s last name and left. He knows Chase is a decent guy, but he wants something he can’t give him. They are brothers in name only. He thinks they’ve talked enough about family for the day and decides to leave her now that she’s okay. She asks him not to go. At the Quartermaine mansion, Nelle catches Michael unpacking a state of the art Snoo cradle for the baby, which he had planned as a surprise. He tells her to take a nap and it will be ready when she wakes. Nelle leaves, and Michael makes a call to Spinelli to press him to find the evidence that Nelle has set his mom up. Spinelli tries to guide Michael through hacking into Nelle’s laptop, but she catches him on it. He claims he didn’t realize he was on her laptop. He covers and explains he was trying to find more information on the Snoo, and the laptop mix-up explains why he wasn’t able to log in. Later, Monica returns home and helps Nelle and Michael with their cradle. Drew shows up with his bags having decided to move in per Monica’s offer. She welcomes her son home and they hug.

Nina wonders what Obrecht has done to Peter.

Maxie looks at a locket and Chase asks her what it is.

Anna asks Finn if he wants to stay.

Sonny tells Diane the case never should have come to trial.

Nelle lashes out at Michael that his bitch mother is getting exactly what she deserves.

DA Dawson Presents Her Case Against...

Carly is Sentenced and Nelle’s...