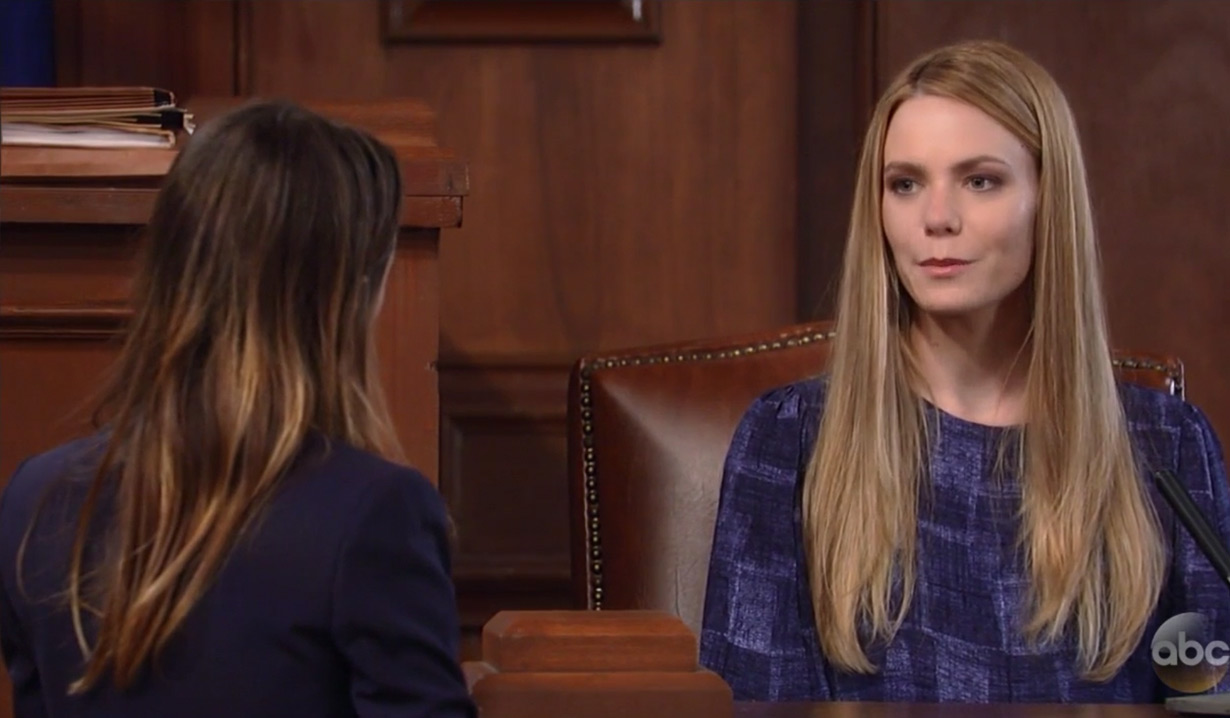 Griffin sips coffee at the Metro Court with Ava but can’t stop thinking about having sex with Kiki. Ava remarks he’s seemed troubled since the Nurses’ Ball, and thinks it is due to her lashing out at him that night. At GH, Kiki fumes to Liz that HR has closed the investigation into Dr. Bensch. Liz encourages her to tell Franco and Ava, but Kiki doesn’t want them fighting this battle for her. Franco walks up and Kiki leaves. Liz and Franco discuss their wedding. Franco wants a big wedding and he wants her whole family there. Liz appreciates the thought, but it’s not a good idea to invite her family. He inquires why. She explains that her family just isn’t close and there is no mystery behind it. She explains she stopped hoping her family would show up for her a long time ago. He asks her to consider inviting her sister Sarah and parents. She agrees to think about it. Liz gets back to work and Franco calls Liz’s grandmother for Sarah’s number. Elsewhere, Michael talks with Spinelli on the phone and asks him to get the information as soon as he can. Afterwards, he meets with Nelle and insists on taking her to the courthouse.

At home, Dante gets dressed for court. Lulu wishes him luck and they kiss before he leaves. In court, the opening arguments are made in Carly’s case. DA Dawson argues that Carly pushed Nelle down the stairs and she is not suffering from mental instabilities. Diane counters that Carly has been dealing with the loss of her son and has clung to a delusion that he was sending her messages from beyond the grave, and that she suffered a breakdown the day of the events. Bobbie is called to the stand first, and she admits that Carly felt Nelle was trying to separate Michael from his family. Joss is next to testify, and states that Nelle is her friend and she’s never felt threatened by her. Joss fights back tears as she answers the DA’s questions about the fight at the shower. Carly blurts out that she won’t let her daughter be questioned like this, and she assures Joss she’s not mad at her. The judge calls a recess, and Carly snaps at Nelle that she hopes she’s happy over what she’s done to Joss. Michael comforts Joss, who breaks down in tears. Diane tries to keep Carly calm. Sonny asks Bobbie to take Joss home, which she does. Back at the Metro Court, Kiki interrupts Ava and Griffin’s talk. Griffin realizes they should get to the courthouse and rushes off get the car. Ava checks in with Kiki and tells her about Bensch’s visit to the galley and his concern for her. She has to get to court but wants to discuss this later. Ava leaves, and Kiki meets with Lulu to ask a favor. She explains her problems with Bensch and wants Lulu’s help exposing him. Unfortunately, with no evidence and the case being closed Lulu can’t write about it without putting herself and her paper in jeopardy of a libel suit. She can however write a personal story about Kiki’s experiences, which Kiki agrees to. Back in court, Ava arrives and takes the stand. She recounts Carly attacking Nelle over a baby shower gift, and that Carly was in complete control of her mental faculties. Ava is asked about the baby blanket, which she doesn’t recall seeing. Michael takes the stand next and is questioned about his relationship with Nelle. After Michael, Dante testifies that the PCPD did not find the baby blanket that Carly claimed she and Nelle fought over. Dante is also forced to admit that Carly threatened Nelle on more than one occasion. After, Dante steps down, Sonny asks him to go home and check on Mike. Nelle is next to take the stand. She discusses her history with Carly, including singing her sad story about her father selling her kidney to Carly’s family to save Joss’ life. She admits she came to town to hurt Carly, but only because her father lied to her about Carly, and she deeply regrets her actions. She speaks about her relationship with Michael, and how Carly constantly sought to break them up. Nelle cries that the nightmares she’s had since the fight and the fall have destroyed her hope that her baby will be raised in a loving and supportive family environment. When Nelle steps down, she trips, and Michael runs to her side. Carly rolls her eyes at Sonny. The defense rests and Diane prepares to make her case.

Anna explains to Finn that something between her and Robin has been lost.

Jordan rants to Curtis that she won’t lose her job over Peter August.

Alexis warns Monica that Kiki is going public with the harassment claim.

Michael talks to Spinelli on the phone and explains Nelle is burying his mother.

Nelle asks someone what they are doing.

Diane questions Sonny about his fears for Carly.

Jason advises Carly that she can stop all of this right now.

Finn's Unhappy Reunion With His...

Jason Hesitates on the Stand During...