Wednesday June 6, 2018: Kiki turns to Alexis for help, Anna tells Robin about Peter, and Julian asks Kim for another chance. 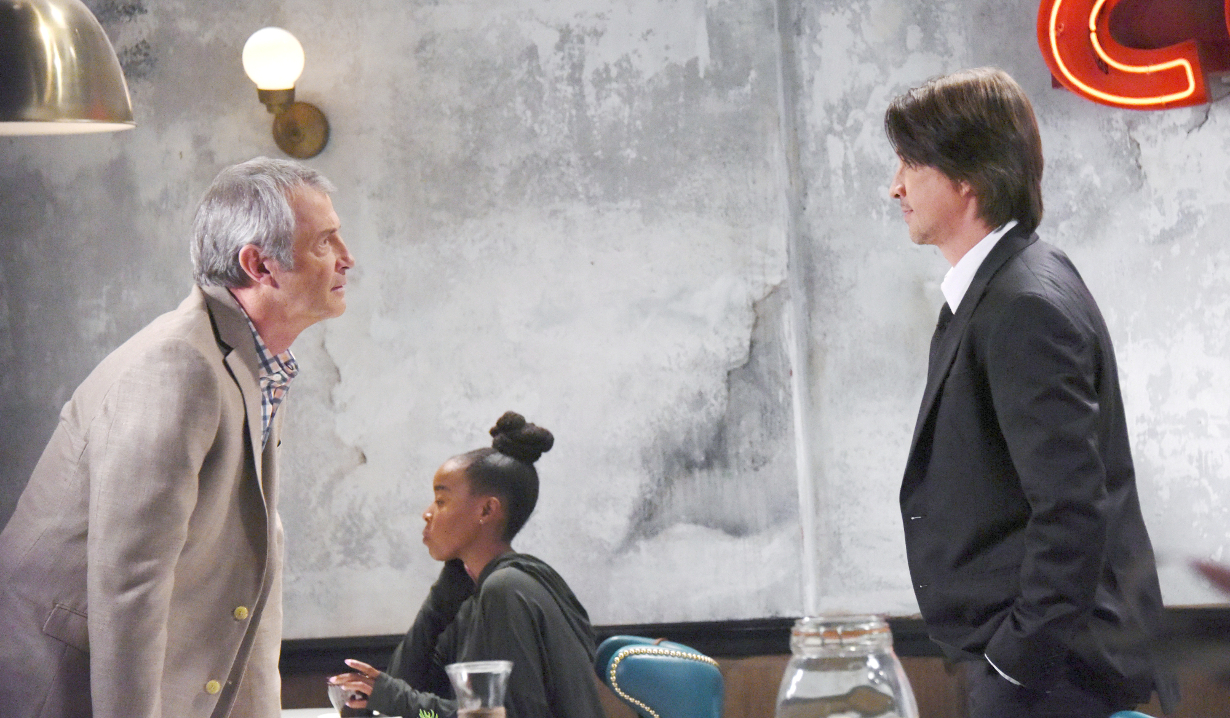 Sonny anxiously waits in the court room. Diane joins him, and they discuss how their strategy relies on Jason backing up the insanity defense. Carly is shown in and Diane gives her a more positive spin, but her client isn’t thrilled about going to Shadybrooke. They warn her that Nelle will be testifying and she needs to stay cool. With some prodding, Carly agrees to keep it together and go along with the plan. Sonny hugs her. Michael and Nelle are in Kim’s office at the hospital. She gives mother and baby a clear bill of health. Nelle feels lucky and takes Michael’s hand. After they leave, Julian drops in and asks if she’s avoiding him for chasing after Alexis. He makes it clear that the lawyer rejected him. Kim admits he hurt her feelings. Julian explains that he’s finally realized that he actually is bad for Alexis. He’s hoping he hasn’t screwed things up too much with Kim and wants them to try again. She agrees to give him a second chance. That makes him happy and they kiss. Meanwhile, Michael offers to drive Nelle home, but she explains she’s been subpoenaed to testify. She adds that Sonny asked her to lie on the stand. Nelle says she must tell the truth when she testifies. After he assures her they are in this together, she goes to the bathroom and he calls Spinelli to make a move against Nelle. Down the hall, Liz and Kiki talk about her problems. Liz suggests she talk to Franco, but Kiki thinks that would lead to trouble. Bensch shows up. He says he had a chat with HR and cleared up any misunderstandings. Her evaluation has been submitted and it was glowing. He’s sure this will all be over soon and strides off. Kiki runs. At home, Alexis is about to open a brown envelope when Nina shows up. She wants the lawyer to handle her divorce. Alexis can’t. Valentin is her brother and it could perceived as a conflict of interest. Nina asks her if she can be charged with a crime if she knows about it. Kiki arrives so Nina leaves. Sitting down, Kiki explains that Bensch has been harassing her. That doesn’t sound like the man Alexis knows but she tells Kiki she’s doing the right thing by coming forward. Kiki just wanted to give her a warning in case her past with the doctor comes up when this goes public. The young woman admits that she doesn’t have much evidence, but she was awarded a position she wasn’t qualified for. Alexis offers to be her lawyer and suggests they look for past victims. Obrecht wakes up Peter in the cabin and waves a butcher knife at him. He’s still bound to the bed and she wants a confession. He’d rather die than spend his life in prison. Liesl would rather just torture him. Before she can slice off his finger, Nina interrupts. Obrecht is starting to question her commitment to their plan. Nina claims she’s not liable if she doesn’t aid in committing the crime. Obrecht points out that she brought groceries to help. In a Berkeley hotel, Finn assures Anna that Robin will understand what she did. Robin arrives, grinning ear to ear. Finn decides to leave them alone. Robin probes her mom about the doctor and babbles until her mom stops her. They sit down and Anna bluntly explains Peter is her son. Robin shakes her head and crosses her arms while her mom gives her all the details. Anna assures her that Peter only has a grudge against his mother, not the whole family. Tearing up, Anna says she changed after that and never wanted her daughter to look at her the way she’s looking at her now. Robin can understand all of this rationally, but emotionally it doesn’t make any sense. Her mom isn’t the person she thought she was. Anna insists that what they had was always real. Robin needs time to process this and exits, leaving her mother in tears. In the café across the street, Finn is shocked when his father, George (played by James Read) appears. He asks after Chase and tells him how much he has missed him. Finn doesn’t want to act like things are normal. They cryptically discuss losing their loved ones. George is sorry if he thinks he moved on too fast after his wife died. He asks Finn about the woman in his life. He’d love to take them out for dinner. Finn refuses and is startled when his father explains he’s coming to Port Charles. The doctor insists that he’s changed over the past twenty years and he’s not the same person anymore. His father wonders if what he did was really so awful. Finn walks out.

Jason Refuses to Testify That Carly...

DA Dawson Presents Her Case Against...