Jason Refuses to Testify That Carly Is Insane

Tuesday June 5, 2018: Dante and Lulu argue about her job, Kim is relieved by Drew's news, Sam is stunned by her mother's latest decision, and Jason argues with Diane. 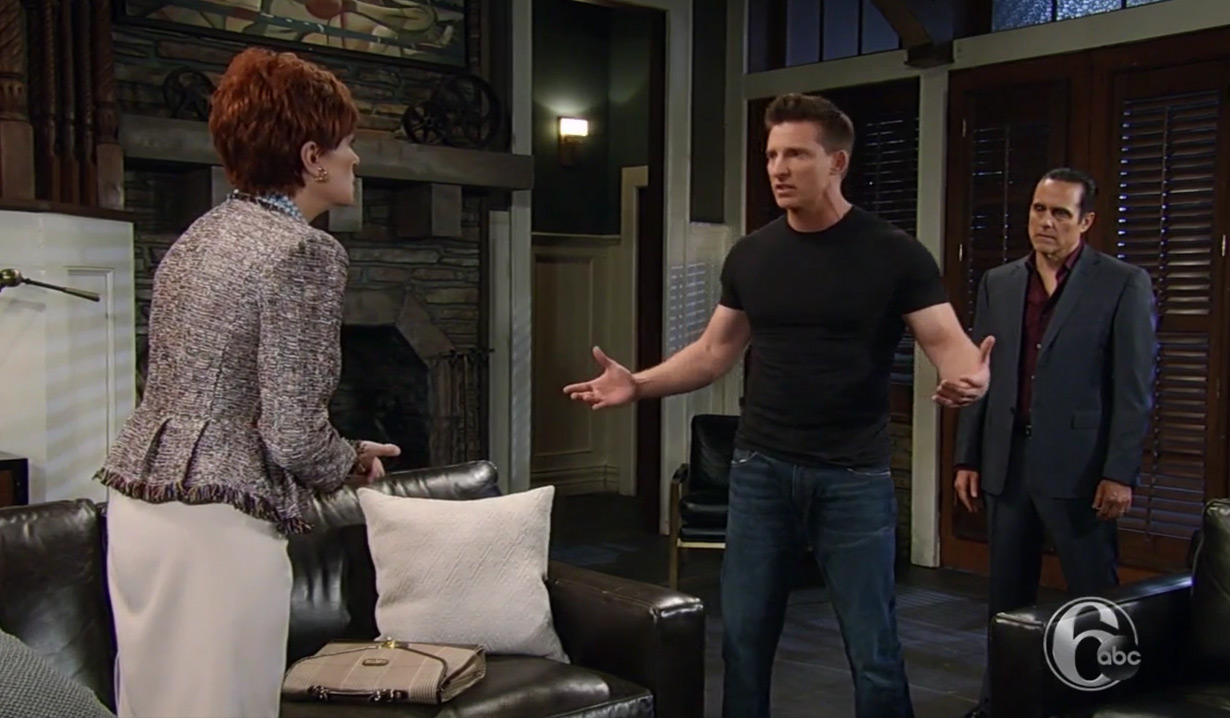 [This recap was started at 3:07 PM EST due to breaking news.] Dante and Lulu argue at home about Lulu’s mistake in trusting Peter. Dante wants her to take time away from her job to rethink her priorities, but she refuses and says she’d only resent him if she quit. Lulu suggests a compromise, should she find any information in a future investigation that is pertinent to the police then she will tell him, her husband, but not the cops. They will decide how to best deal with it. Dante accepts her compromise. At the Floating Rib, Felix asks Stella if Mike is a special case to her. She admits he reminds her of someone she used to know, and she likes his son. Felix jokes bonding with Sonny might put her at odds with her nephew and his bride-to-be the commissioner. She thanks him for ruining what was a lovely conversation. Jordan and Curtis walk in, and they make small talk with Felix and Stella. Stella tries to play nice, complements Curtis’ magical Nurses’ Ball performance, and toasts to whatever comes next. At Alexis’, Sam speaks with her mom about giving Drew her half of Aurora. Sam simply wants a clean break, which Alexis can understand. Alexis reveals her recent slip with Julian, the kiss they shared, which has led her to seeing Kevin to find out why she’s drawn to bad men. She knows she has daddy issues and seems to pick men who treat her like her father did. She is delving into that and wants to know if there was ever any good in Mikkos. Sam asks how she can find that out given he’s been dead for decades. Valentin arrives, and Sam hopes he is not how her mom is going to solve this mystery. Valentin has brought an initial payment for Alexis in exchange for the work she’s doing for him. He has an envelope of various documents on Mikkos. Sam begs her mom to be careful with the Cassadine, and warns Valentin not to hurt her mother or he’ll have to deal with her. Sam leaves, and Alexis gives Valentin the legal documents she’s drawn up making Charlotte the main trustee of his estate in case something happens to him. He tells her that he’ll have more information on Mikkos for her soon, but she’s decided she no longer wants his help. He tells her to suit herself but leaves the information he already brought and departs. Alexis places the envelope in the fireplace, strikes a match, but hesitates. In Drew’s office, Kim arrives to speak to Drew, who is out, and finds the DNR on his desk. When he returns she confronts him about it and the memory procedure. Drew reveals he’s not going through with it, which is a relief to her. He explains Oscar dropped by to see him, and after their talk he realized it would be selfish of him to go through with it and risk costing Oscar his new family. Kim believes he made the right decision. Oscar returns from HR and interrupts their talk. Kim asks what is going on. Drew explains Oscar is going to intern here this summer. Kim is thrilled and suggests they all go get ribs and celebrate. At Sonny’s, Jason details the evidence that Carly was set up by Nelle to Sonny and Diane, from the phone calls to the missing scarf. Diane reminds him there is no proof and it is all speculation. She also points out by finding the evidence it gives Carly a motive to have wanted Nelle dead, which the DA will use. Sonny thinks Jason is only making things worse for Carly, but Jason is worried what being found guilty even by reason of insanity will do to Carly and her relationship with her kids, especially since she is innocent. Diane reiterates the insanity plea is Carly’s best shot at avoiding a lengthy jail sentence, and she needs him to testify that Carly believed she was being haunted by Morgan because it shows she was having a breakdown. He believes Carly should fight this, and he won’t take the stand for Diane and say Carly is crazy because she’s not. Drew, Kim and Oscar arrive at the Floating Rib. Drew spots Curtis, and they talk. Curtis wants his friend to know Sam may be working with him in the PI business. Drew thinks it is a good move because Sam is a good PI. Meanwhile, Stella talks with Kim. Kim thinks Stella must be out celebrating with her nephew after his grand proposal at the ball. Stella comments that a lot can happen between now and the wedding.

Sam goes to Aurora to pack up her things and leaves a letter for Drew with his secretary.

Robin asks her mom what any of what she’s said has to do with Peter August.

Julian asks Kim if she’s avoiding him because he chased after Alexis.

In court, Carly asks Diane and Sonny whose testimony they are worried about.

Nelle informs Michael she’s been subpoenaed to testify against Carly.

Finn's Unhappy Reunion With His...