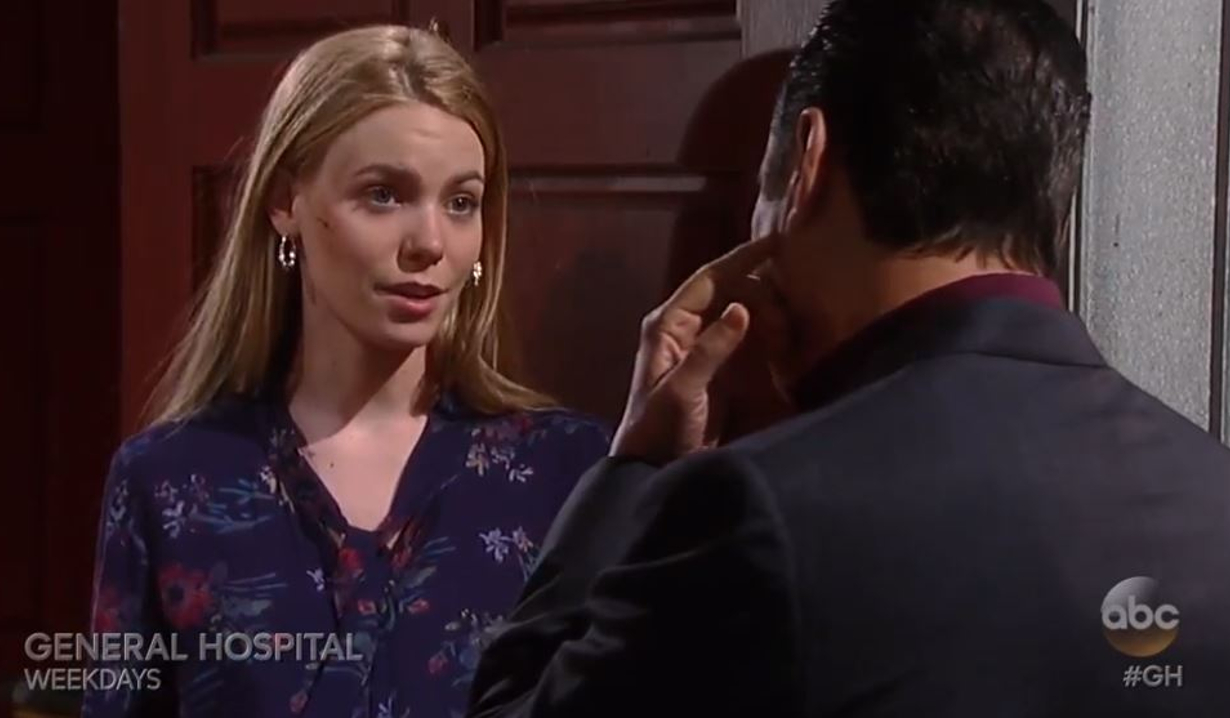 Sonny shows up at the Quartermaine estate and starts bickering with Nelle. He suggests that she ‘pay it forward’ now that she’s got what she wants. She claims that Carly’s fate is sealed, and her statement is true. He promises that she and the baby won’t want for anything if she changes her statement. Nelle turns the offer down; she wouldn’t feel safe if Carly went free. He warns that he looks after his family, bares his teeth, and leaves. Oscar goes to prison to visit Carly. She’s baffled to see him. He has a message from Joss, claiming she said she forgives and loves her. Carly says that’s sweet but knows it’s a lie. However, she’s happy to know that her daughter has him looking out for her. Later, Nelle pops by for a chat. After some banter, Nelle tells her about her little visit with Sonny and gloats about how everyone has been rallying around her. She promises to be there for Joss whenever she needs someone. Carly makes a fist. Nelle keeps taunting until Carly screams threats and hits the glass. A guard drags her away. At the Corinthos compound, Mike beats Felix at checkers. Joss comes in, but Mike doesn’t recognize her at first. When Mike goes off, Felix tells Joss how much she is like her mom. He suggests she try putting herself in her mother’s shoes. After Mike returns, he and Felix discuss Sonny. Mike explains that he ‘moved that guy’ closer to home. Soon, Sonny arrives and asks what they’ve been talking about. Felix says they talked about one of his old friends. Later, Sonny tells Joss that she should go to Australia and stay with her father while the trial is on. She doesn’t want to leave Oscar or her sports team.

At Aurora, Drew calls Andre to insist that he still want to go along with the procedure, no matter how dangerous it is. Monica drops in to see him. She heard he was living there and reminds him that he’s always welcome in the Quartermaine house. He thanks her but turns down the offer. She gives him keys to the house anyway. After she leaves, Oscar comes by with an invitation to a school event. Drew wonders why he came in person. Oscar needs some fatherly advice about Joss and her mom. They chat. As Oscar leaves, Drew asks him to drop by HR and fill out an application. They hug, and Oscar happily goes. Chase stops by the hospital to see Maxie. He runs into Finn and informs him that Peter has escaped. The doctor hurries off. Down the hall, Anna is in Maxie’s room. She hands her the note Peter wrote for her. Maxie doesn’t want to see of hear from him. Anna leaves and leaves the note behind. She bumps into Finn on the way out. They discuss the Peter situation and she doubts he wants to see her again. Anna is in a rush to get to Berkeley to tell Robin about the brother she never knew she had. She worries that this could ruin Robin’s trust in her. The doctor is sure that won’t happen. Before she can leap on the elevator, he kisses her and promises that things will be okay. Back down the hall, Maxie reads Peter’s note. It insists that he never meant to hurt her and he wishes he’d known Nathan. He also wishes her and her child happiness. She sobs. Chase enters. Maxie tells him about the note and that she hasn’t heard anything else. Epiphany comes in and chases him out before telling Maxie that she can go home. When Maxie is ready to go, Chase offers to take her home. He tells her how honorable her husband was and wants to do his part to help. In a cabin in the woods, Peter wakes up screaming, strapped to a bed. Nina strolls in. She wants her brother back and accuses him of using Nathan as a human shield. He screams that he is nothing like his father and fought hard against him. Nina isn’t convinced and reveals that it’s someone else keeping him there. It’s Obrecht. Dr. O wanders in with a hatchet and smashes it into the wall above his head. Nina decides to take her aunt outside for a chat. She wonders if there is a plan. Obrecht admits it’s open but she’s taking matters into her own hands before the WSB tracks Peter down. Nina wants vengeance too but would rather call the PCPD. Obrecht decides that they should keep Peter there until he confesses to whatever will put him away permanently. They shake on it. When they return to the cabin, Peter begs Nina not to leave him with the ‘maniac’. She leaves anyway. Obrecht is sick on his complaining and gags him.

When Anna gets on a jet for California, Finn surprises her and takes her hand.

Valentin sticks by his promise.

Peter Awakens a Prisoner in a...

Jason Refuses to Testify That Carly...