Tuesday May 29, 2018: Diane and the new DA argue in court, Bensch threatens Kiki, Peter tries to make a deal to stay out of jail, and Drew is willing to take any risk to rid himself of Jason's memories. 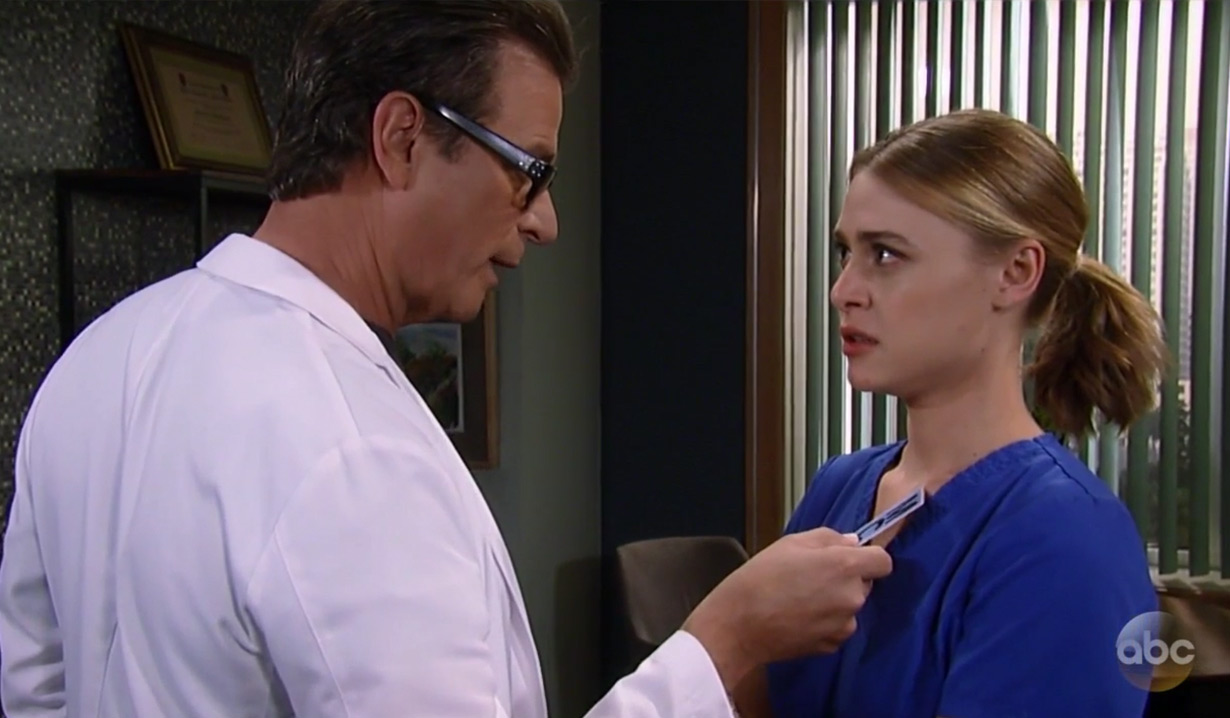 DA Margaux Dawson (played by Elizabeth Hendrickson) and the judge enter court as Carly’s hearing begins. Carly hesitates, but pleads not guilty by reason of insanity. Diane speaks about Carly’s past year of hardships and asks for Carly to be released on bail so she can heal. DA Dawson requests Carly be held without bail because she is a flight risk. Dawson also claims Carly is a threat to Nelle Benson and her unborn child. The judge rules that bail has been denied and Carly is to be held in Pentonville until it is determined whether she is mentally unstable or not. Carly blurts out, “What if I change my plea?” Diane warns Carly not to play into the DA’s hands, because this is what Dawson wants. Carly sticks with her original plea. Before she is taken off by the bailiff she asks Sonny to tell Jason to hurry up, and that she will explain everything to Joss when she can. As the DA heads out, she remarks to Diane that her client sure doesn’t seem crazy to her. At GH, Alexis meets with Kevin in his office and wants him to figure out why she’s drawn to men that are bad for her, while wanting nothing to do with nice guys. Kevin informs her it will require intense sessions and a lot of work, which Alexis agrees to. Elsewhere, Bensch asks to speak with Kiki in his office. They head there, and he tells her he’s written a draft of her evaluation and hands it to her. She reads it, and it paints her as lazy, late and someone who doesn’t take criticism well. She cries these are lies and will ruin her. He gives her a keycard to his room at the Metro Court and instructs her to meet him there and prove how much she deserves a better evaluation. In the hall, Franco and Liz go over wedding plans while on break. He doesn’t know why she isn’t inviting more of her family, and thinks it is time he meets them. She says they aren’t close and would be too busy to come. Liz heads back to work. Meanwhile, Drew speaks with Andre by the nurses’ station. Andre has acquired his notes on the memory mapping procedure from the WSB, but warns him this is uncharted territory they are heading into. Drew is willing to take the risk. Andre leaves, and Franco approaches Drew to ask why he is going to let Andre play with his head again. Drew gets a call and excuses himself. At the PCPD, Peter informs Robert he has something to trade that the WSB wants. Robert doesn’t want to hear what he has to offer and orders an officer to return Peter to his cell. Down in his cell, Peter gets a visit from Drew, who he used his one phone call to contact. Anna visits Finn in his room at the Metro Court. She rambles on about pushing him away because she was a danger to him. Finn eventually tells her to shut up and pulls her into a kiss. He says she’s worth any risk and not to push him away again. She agrees, and explains she still has to try and save Peter and tell Robin about her brother. Finn offers to help her, and they make plans to see each other later. Anna leaves.

Anna heads to GH and runs into Andre. She explains what happened with Peter, and that she finally confided in Finn. Elsewhere, Finn and Alexis see one another at the GH AA meeting. Finn speaks to the group about his mistake of starting a new relationship with someone who he ended up hurting. He hopes to make amends to this person and earn their trust again. After the meeting, Finn apologizes to Alexis. In the hall, Franco bumps into Kevin. Kevin reminds him that he hasn’t been in for any follow-up sessions. Franco agrees to stop by his office, and then begins searching for Jeff Webber on the internet. At the nurses’ station, Liz sees Kiki is upset and asks if everything is okay. Kiki runs off when Bensch walks by, which Liz takes note of. Liz finds Kiki crying in a supply closet. Kiki breaks down and tells Liz that Bensch trashed her in his evaluation but offered to fix it if she has sex with him.

More: News for all four soaps

Anna arrives at the PCPD and lets Robert know that she wants to accompany Peter to Steinbower. He informs her the transfer hasn’t been arranged yet, and right now Peter is talking to someone. Down in the cells, Peter tells Drew if he helps keep him out of jail then he can return his memories.

Liz tells Kiki that Bensch is harassing her.

Lucas informs Julian that it is far from a done deal.

Peter offers to give Drew a copy of his memories for a price.

Curtis suggests to Sam that she partner up with him.

Kim asks Jason to hear her out.