Carly Agrees to Plead Not Guilty by Reason of Insanity

Friday May 25, 2018: Maxie names her son, Carly argues with Diane over her plea, Lulu and Maxie make amends, and Peter learns who betrayed him. 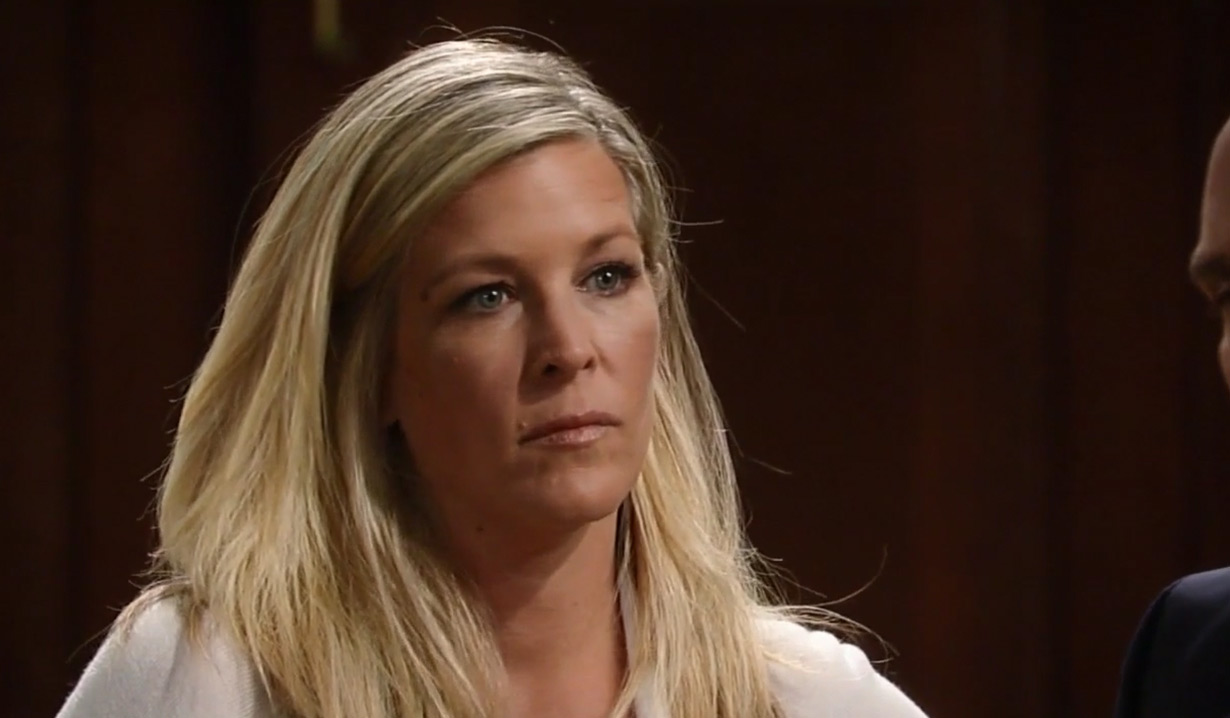 At Kelly’s, Anna and Robert discuss how to tell Robin about her brother. Robert reminds her that she was never supposed reveal the truth about Peter. Mac and Felicia visit Maxie at GH. Maxie fills them in on giving birth by the side of road with Peter’s help and they learn he is actually Henrik Faison. She fumes over Peter using her and Nathan paying the price. Mac and Felicia tell her to focus on her son who needs her now. They walk down the hall to the NICU and look in on the baby, who Maxie is naming James after Nathan’s given name and Malcom after Mac. Out in the hall, Brad runs into Nelle. She is being released and is waiting for Michael to take her home. They talk about Carly, who everyone thinks is having a psychotic break. Dante argues with Peter in the PCPD interrogation room and accuses him of using Maxie and Lulu for his own selfish agenda. Dante storms out, and later Anna visits Peter. She wants him to know the truth and explains what happened years ago after his birth, including Valentin handing him over to Faison to spite her. He thinks she’s lying and asks why Valentin didn’t tell Faison she was his mother. Anna reveals Valentin called it a strategic move. Peter quotes, “Never give up all your leverage,” which is what Valentin taught him. Anna knows Valentin later regretted what he did, which is why he befriended Peter. Dante walks in to take Peter to his arraignment. However, Anna stuns everyone by stating she won’t testify against her son. She won’t condemn him again as she once did and walks out. Robert thinks Anna’s feelings are clouding her judgments, but he knows what Peter is capable of. Peter tells Robert when he finds out what he has to offer that the agent may want to come to an agreement. At Lulu’s, Lulu thanks Nina for bringing Charlotte by the night before and asks for her help in explaining what is going on with her father. Suddenly Valentin shows up to pick up Charlotte because it’s his week. Lulu can’t believe he’s not in jail. He informs them that no charges have been filed against him and none will be, so he wants his daughter. Nina suggests he leave Charlotte there for now as a show of good faith. In court, Carly tells Diane she won’t plead guilty by reason of insanity because she’s not crazy and didn’t push Nelle. Diane begs her to take this way out otherwise she runs the risk of time in prison. Sonny would rather she spend six months in a mental hospital than twenty-five years in jail. Carly asks why he thinks she’ll be convicted. Diane reminds her they have no proof of her version of events, but they can prove irrational behavior on Carly’s part. She also thinks the new DA Dawson will try and make a name for herself by taking Carly down because she is the next best thing to nailing Sonny, who nobody has brought down so far. Carly agrees to Diane’s strategy but hates it. Back at GH, Lulu drops by to see Maxie and tell her that she looked in on the baby and he’s beautiful. Lulu feels like a fool for letting Peter manipulate her and apologizes for her actions. She never thought things would go down how they did and Nathan would get hurt. Maxie tells Lulu that she is not responsible for what happened to Nathan, but Peter is. Faison came to the office that night for Peter and no one else. Maxie is also sorry she believed Peter or leaned on him, and that she couldn’t see he was as bad as his father. Lulu asks if she can help her in any way. Maxie replies, “You can help me taker Peter down.” In the hall, Brad has to get going, and Nelle assures him she’ll be find until Michael arrives. He still can’t believe Carly would push her. Nelle says she didn’t throw herself down the stairs and hopes Carly gets the help she needs. In the park, Valentin talks with Nina and tries to apologize. She screams at him that this time things are different because her brother is dead. She cries that neither him nor Peter warned anyone that Faison was coming and wails that all he does is lie. She can’t live like this anymore and declares she is done. Every time she looks at him she only sees her dead brother. She yells at Valentin to leave town and leave Charlotte with Lulu before he breaks her heart too. Nina walks away.

Drew asks Andre what is keeping him from doing the procedure.

Kiki faces off with Bensch and says, “This could end my career before it even starts.”

Franco tells Liz it is time she met his only family.

Alexis asks a man for a consultation.

Finn states to Anna that he is who she should be with.

Peter wants all charges against him drop in exchange for what he has to offer.

Carly is asked by the judge how she pleads.

Carly Learns 25 Years in Prison Is...