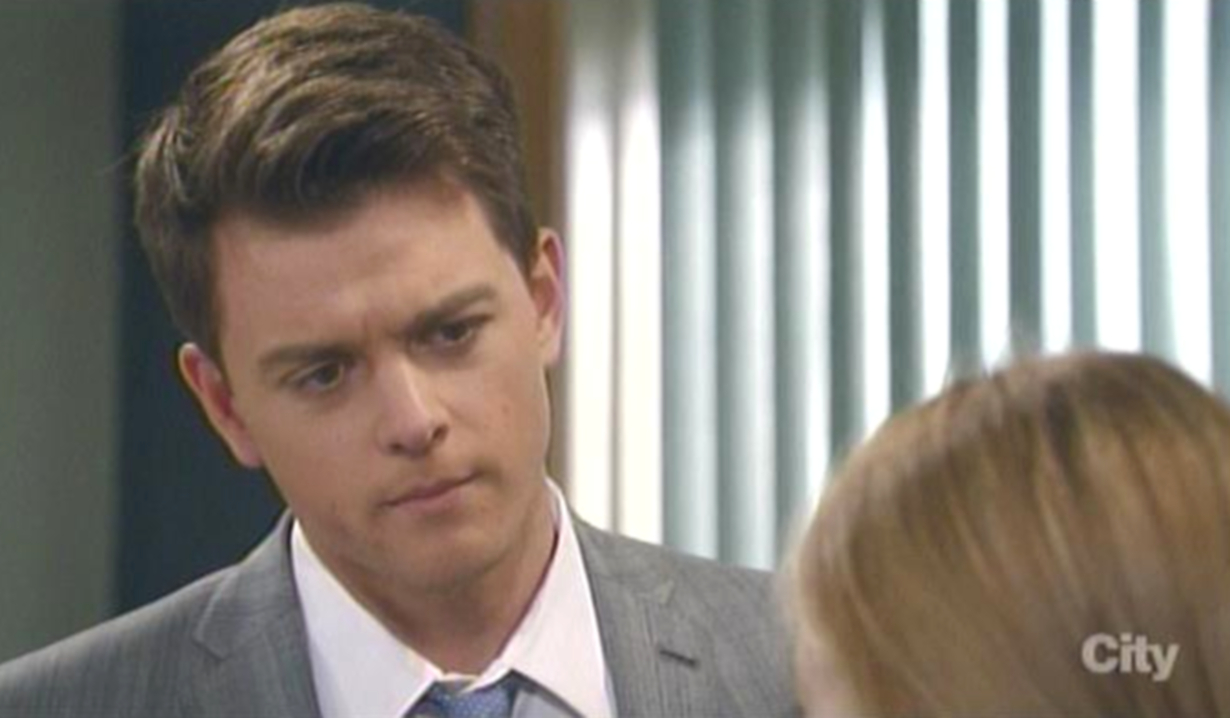 On a bench, Oscar tells Joss that he’s sure her mom would like to hear about their performance at the Ball. Joss is conflicted. She’s not sure whether her mom hurt Nelle deliberately or not. Nelle pretends to meditate as Michael shows up to see her at the hospital. She claims she’s been suffering from post-traumatic stress. After he leaves, Joss drops by with a stuffed animal. They talk about what happened. Joss gets upset when Nelle claims it wasn’t an accident. She tells Joss not to abandon her mom and then suggests Carly is having some sort of breakdown. Nelle hopes she can get some help. Smiling, Nelle adds that the whole ordeal has brought her and Michael closer together. Griffin and Kiki are in bed at the Metro Court when Ava comes banging at the door. As she calls in, Kiki wakes up and runs into the bathroom. Griffin pulls on some pants and answers the door. Ava sees the champagne bottle and guesses he had a ‘rough night’. She apologizes for being out of line last night and wishes she could take back what she said. As Ava begs him for another chance, Kiki nearly starts crying in the bathroom. Her mom tells the doctor how scared she was of losing him and begs for forgiveness. He insists she doesn’t need his forgiveness. Ava tells him how hard she is working to make things right with her daughter. She’s sure that Kiki would never betray her. Eventually, he cracks and is about to explain when his phone rings. It’s a text from Kiki begging him not to tell her mom anything. He tells Ava he needs to get to work and will call her later. Once she’s gone, Kiki comes out of the bathroom. She respects his desire to be honest, but her mom can never know the truth. It would destroy her. After she leaves, he has a shower. Once he gets out, Ava returns in nothing but a trench coat. She drops it and they start making out. Sonny goes to the PCPD to pick up Carly. She’s looking forward to getting out of there and proving her innocence. They discuss his father and his affection for Stella. He tells her about singing with Mike at the Ball. That puts a smile on her face, but it drops when she finds out that Michael has been giving them the silent treatment. Diane arrives and tells them that things are not looking good. Sonny offers to put pressure on the judge, but Diane warns that will only make things worse. Carly starts ranting about Monica until Michael interrupts. His father and the lawyer exit and Carly tells her son what a master manipulator Nelle is. He asks for her account of events and she gives it, insisting that she would never endanger her grandchild. Michael says he loves her and walks out. Meanwhile, Sonny and Diane discuss Carly’s case. They both suspect that Carly’s version of events is wrong and she’s out of control. Michael walks out, asking his father to take care of Carly. Diane and Sonny return to Carly. The lawyer reminds Carly of her history of violence, her time in a mental institution, and the lack of any evidence to corroborate her story. Carly refuses to believe that Nelle can send her to prison for ten years, “Try 25,” says Diane. This only makes Carly livid. When Diane leaves to take a call from the DA, Carly vows that she will get her life back. Drew joins Kim at Kelly’s for coffee. They discuss their love lives and they both think they deserve better. When the topic turns to his old self, he says it may not be ‘old’ for much longer. He needs to get his memories back for his kids. He’s talked to Andre and there seems to be a way to make that happen. Kim is worried that something could go wrong and Oscar would lose him. Oscar comes in and they discuss getting him an internship. When he goes outside, he runs into Joss who tells him what happened with Nelle. Julian shows up on Alexis’ doorstep with flowers. It takes some convincing, but she lets him in and he tells her she needs a man who will love her unconditionally. She says that would be nice, but it can’t be him. They talk about Elvis Costello and recollect their past. He wants her to remember the world will always be her oyster. They kiss. She backs away and begs him to stop comforting her and leave. After she yells at him to go, she smashes the bouquet he brought. She calls someone and says it’s an emergency.

Michael returns to the hospital to see Nelle and promises not to let her out of his sight from now on.

Lulu receives a visit from Nina.

Valentin does the best he can.

Carly Agrees to Plead Not Guilty by...