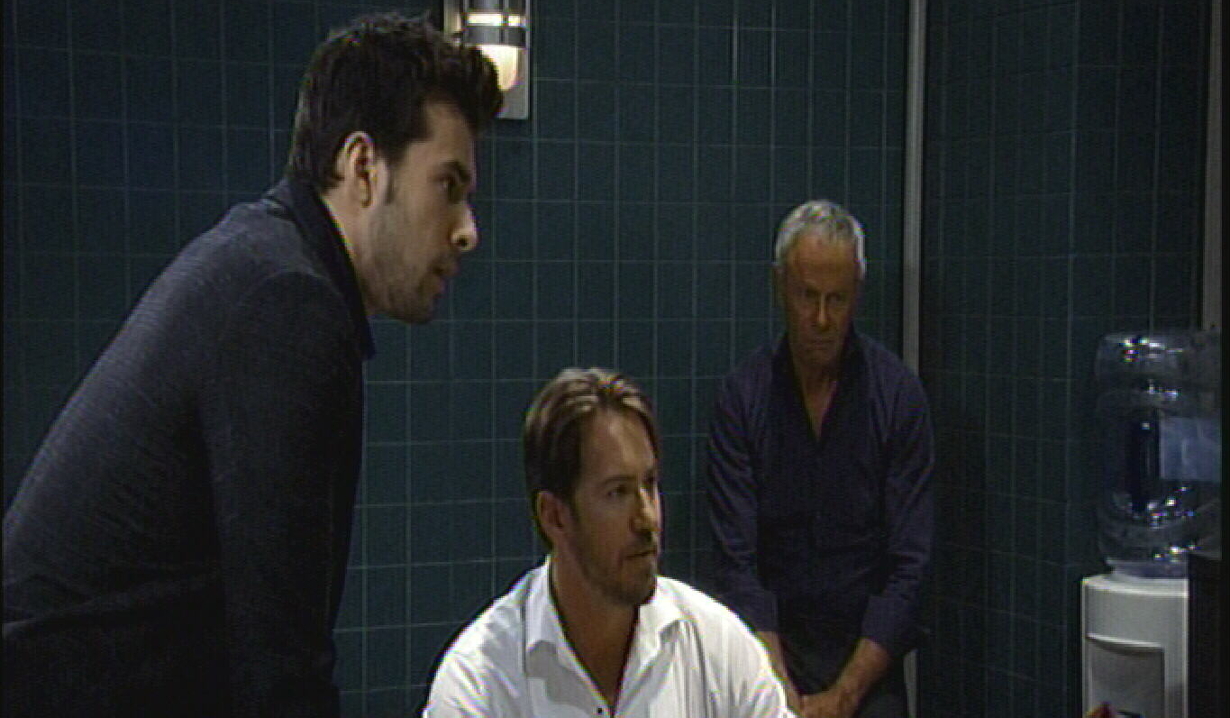 Robert shocks the PCPD when he marches Peter in and explains that he’s Henrik Faison. Jason arrives. Peter declares he wants to press charges against him for attempted murder. Robert says that Peter was attempting to kill Anna. Chase asks Jason and Sam to explain the situation to him. Sam says he was working for her under a false name and that’s fraud. Robert doesn’t care about this. He says the bureau has priority here and their own charges. Peter barks that Jason thinks he abducted him when, in fact, he saved his life. He explains that he betrayed his father to save Jason. Sam doesn’t buy that. Chase prompts Jason to actually say something. Jason says Faison shot him and he woke up years later in restraints. He rejects the idea he was receiving medical attention. Peter demands to go to the hospital to have his head examined since Jason assaulted him. After he is taken away, Sam and Jason worry that Peter is trying to escape. She remembers that Maxie is at the hospital and they run off. Anna and Finn are on the docks. She tells him the story of Peter hiding in plain sight and details how she got pregnant with Faison’s child. She gave him up and never thought about it again. Anna beats herself up about abandoning him. If she hadn’t, maybe she could have prevented Faison from getting his hands on him. Robert calls her and says Peter is on the way to the hospital. Valentin stops by the Falconeri residence to get Nina and Charlotte. Annoyed, Lulu informs him that Charlotte is sleeping and Nina is gone. He argues with them, admitting that he’s always known Peter’s true identity. After he and Lulu exchange some barbs, he walks out, dropping a hint that Peter was Lulu’s ‘pen pal’. Dante instantly questions his wife about this. She explains that she worked with Anna to lure Henrik out of hiding. He’s not impressed. If she was a cop, she’d be knocked down to traffic duty. She points out she’s a journalist. He suggests she learn to actually do research and walks out. Lulu sits down with her computer and cries. Nina drops by the hospital to see Maxie, who is confused about why Peter hasn’t come to see her. Maxie senses that something about Peter is bothering Nina, who simply claims to be tired and leaves. Later, Drew drops by and checks in on her. As they head off to see her son, Jason and Sam arrive. Before they can say anything, Peter is escorted in in handcuffs. He asks to speak to her. After arguing with the cops, Maxie asks to speak to him alone. Peter tells Maxie who he really is. He apologizes but she doesn’t care and demands to go back to her room. Peter is taken off to have his head examined. Drew and Sam discuss whether Peter has the means to help him get his identity back. He tells her that he and Andre are working on wiping Jason Morgan out of his head and he doesn’t want the flashdrive. Sam wants it anyway. When she gets on the elevator, Jason goes with her. Kiki and Griffin go up to a room at the Metro Court. She opens some champagne and tells him how great dancing is. She’s said that most men don’t know how to waltz. He’s never drunk straight from a champagne bottle but takes a gulp. She admits that she went to cotillion three years in a row to learn how to waltz. Laughing, he admits the same happened to him. Reaching out her hand, she challenges him to prove it and they waltz around the room until they begin kissing. They have sex. When Valentin gets back to Wyndemere, Nina is waiting. They start arguing about the Peter situation. He admits that Peter may not be innocent, but he is a victim and deserves some empathy. If she hears his story, some of it may feel familiar to her. They sit down and he explains his relationship with Peter since he was a lonely child. He could see he was trying to escape his father’s shadow and kept track of him. One day, Henrik reached out to him and asked for help changing his identity. That’s when he became Peter and Valentin wanted to protect his secret because he ‘owed him’. Before he can explain why, Anna bursts in and exclaims, “My son almost shot me tonight!” Nina is shocked. Anna explains things to her. Valentin adds that he thought she was terrible. Since she threw her child away like garbage, he thought his father might want him. She admits Valentin had every right for revenge, but not to use her child as leverage. Nina agrees with Anna. Valentin admits he made a mistake and is sure she knows how that feels. Anna tells him to go to hell and storms out. “I’m already there,” he mumbles. Nina packs a bag and leaves.

Anna goes to the PCPD and cries on Robert’s shoulder.

Nelle gets what she wants.

Alexis does something she regrets.

Carly Learns 25 Years in Prison Is...