Tuesday May 22, 2018: Kiki confides in Michael, Ava lashes out at Griffin, news of Peter's identity spreads, and Anna admits the truth to Jason and Peter. 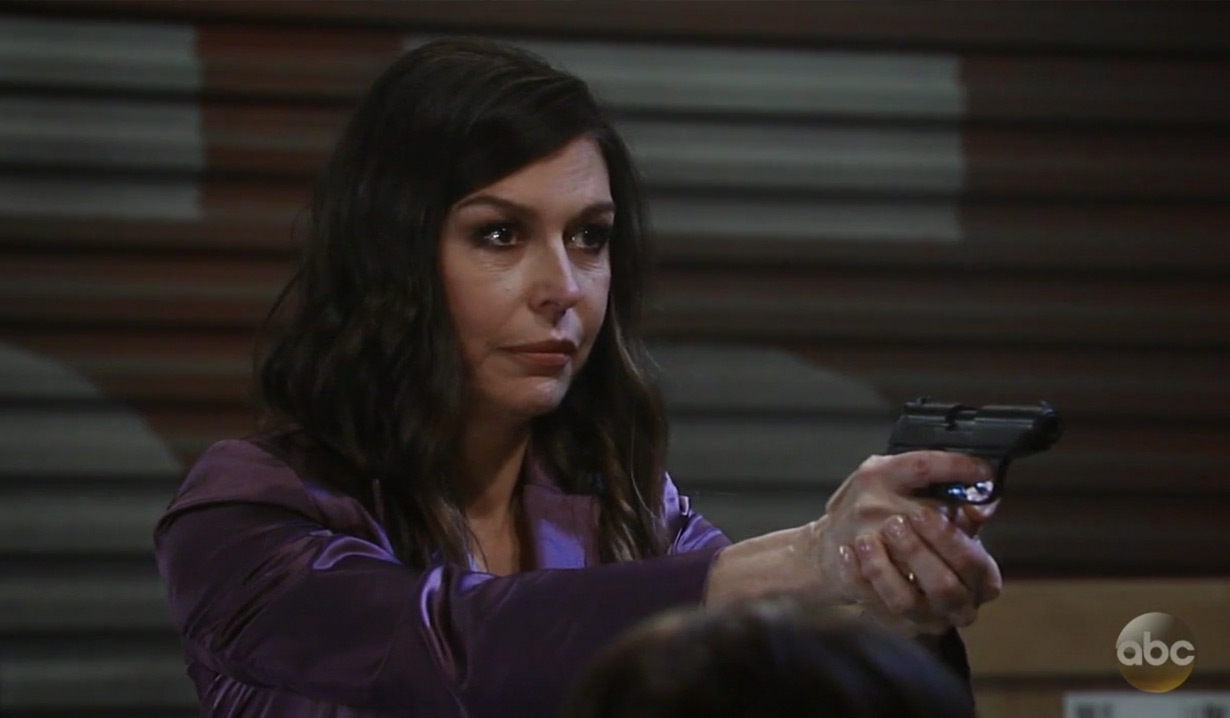 Kiki sips champagne in the empty Metro Court ball room. Michael arrives late to the party and asks why she’s there alone. Kiki doesn’t want to go home to lie in bed and think about going to work in the morning. She confides in Michael what’s been happening with Bensch. She swears him to secrecy when he reminds her that he’s on the GH board. Up in Griffin’s room, he and Ava quarrel over her song choice, which he calls a slap in Sonny’s face. She claims the song wasn’t for Sonny but for Griffin, who she accuses of moving on with Kiki. Ava saw him with Kiki in the dressing room, but he explains he was only comforting her because she was upset. Griffin doesn’t know what Ava wants from him. She wants to hear “I love you,” but that is more than he’s capable of. Ava dumps Griffin and walks out. Later she returns, knocks on his door, apologizes and begs for a second chance. He doesn’t answer so she walks off. Back in the ballroom, Griffin joins Kiki. At GH, Sam and Spinelli visit with Maxie and ask her about Peter. She doesn’t know why he hasn’t shown up, and realizes Nina and Obrecht need to be told about the baby.

At the PCPD, Dante and Robert try and get Valentin to give them Henrik’s name. Finn arrives looking for Anna, and Robert suggests he check the hospital to make sure Faison’s son hasn’t put a bullet in her. Finn departs, and Dante and Robert work to strike a deal for immunity with Valentin if they’re able to save Anna in time. Nina drops Charlotte off at Lulu’s for a surprise sleepover. Once the little girl is in bed, Nina spills to Lulu that Valentin has known who Henrik was all along. Dante calls home and informs Lulu what’s happening at the station, while Nina gets a call from Spinelli and learns Maxie has had the baby. She rushes off to see Maxie. Later, Dante returns home and breaks the news to Lulu that Peter is Henrik. On the pier, Peter holds a gun on Anna and tells her to say hello to his father for him. Jason approaches from behind with his own gun and says, “Tell him yourself, Henrik.” Jason takes Henrik down, and explains to Anna how Sam discovered Peter’s real identity. Anna quickly draws her gun to prevent Jason from hurting Peter and explains that she is really his mother.

Back at GH, Finn arrives and overhears Sam and Spinelli in the hallway discussing Jason going to the pier to find Henrik and Anna. She departs to help Jason and later Nina arrives and visits with Spinelli and Maxie. Nina is thrilled to learn Maxie had a healthy baby boy, who Peter delivered. Back on the docks, Anna explains to Peter the events of his birth, that he was supposed to go to a loving home, but someone betrayed her and gave him to Faison. Finn arrives and listens from the shadows as she explains she only recently learned all of this. Anna won’t lie to those she loves anymore because he is her son. Tears roll down Peter’s face. In the PCPD interrogation room, Robert continues to grill Valentin. He gets a text from Finn telling him to come to the pier, so he quickly leaves. Valentin informs Sargent Murry that he’s being held against his will and no charges have been filed, so he demands to be released.

On the pier, Finn reveals himself and tells Anna that Robert is on his way. Sam appears, and Peter announces, “Now it’s a party.” Jason insists on dealing with Peter before he betrays Anna. Anna is willing to take the chance because he’s her son. Peter spews, “You aren’t my mother, you are just the bitch who gave birth to me.” Peter tries to play Jason and Anna against one another, urging them both to make the first move and kill the other. They don’t fall for his game and lower their guns. Robert and the cops arrive, and Peter is arrested. Robert plans to extradite Peter and send him to Steinbower. Peter is carted off, and Jason gives his condolences to Anna. Sam, Jason and Robert leave. Anna looks at Finn and admits she’s made a mess of everything. Finn brushes her tears away and holds her.

In Maxie’s room at GH, she reveals she is thinking of naming her baby after Peter to honor what he’s done for her. Nina sees Valentin calling her phone and excuses herself. She ignores it and calls Lulu’s house. Dante answers and she fills him in on Maxie’s boy. Dante breaks the news to her that Peter is Henrik.

Valentin arrives at Dante and Lulu’s.

Kiki and Griffin drink and toast.

Maxie looks at someone and wonders why they are handcuffs.

Dante argues with Lulu about confiding in the guy who set her up.

Nina tells Valentin not to ask her to feel sorry for Peter.

Finn urges Anna to go after her son.

At the PCPD, Peter wants to press charges against Jason for trying to kill him.