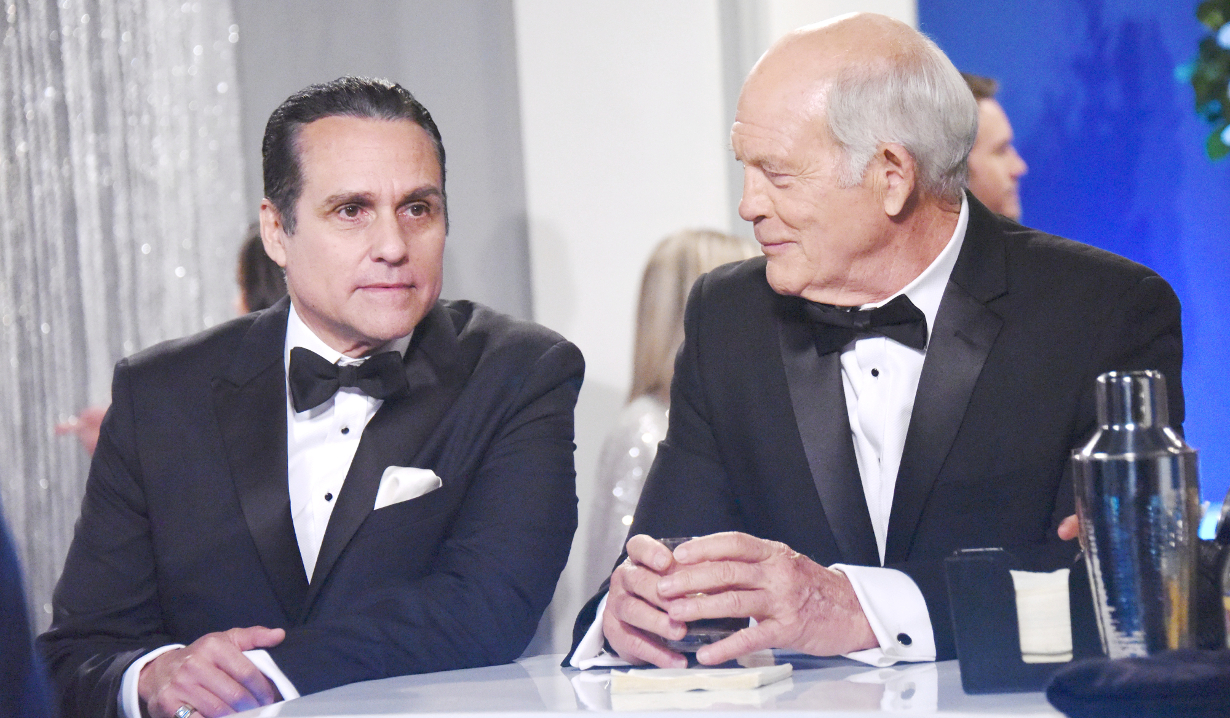 Just as Valentin takes his bow on stage at the Nurses’ Ball, Robert clobbers him in the face and arrests him. He drags him into the hall of the Metro Court. Scorpio cuffs him to a chair and barks questions at him. The Cassadine claims that Anna is walking into a trap. Nina glares over at him. Robert threatens Valentin with a gun. Robin comes out to ask if things are okay. She explains her mom took off after getting a message. Once the doctor and her father leave, Nina asks her husband how long he’s known who Henrik is. He admits he’s known for a while, but it was impossible to know what would happen when Faison went after his sons. She believes him, but guesses he wanted to take her and Charlotte away so she would never find out his role in this. Back in the ballroom, Lucy tries to keep things calm. Mike gets up on stage, cracks an Alzheimer’s joke and sings “The Summer Wind.” As he sings, he imagines being accompanied by a big band until he eventually forgets the lyrics. Disoriented, he stares around at the audience until Sonny rushes up to join him, reminding him of the lyrics. They sing together. Once they finish, everyone stands to clap. Ava isn’t looking forward to following this and goes off to change. Bobbie tells Sonny and Mike what a great team they make. Drew wanders over to Sonny and tells him he did a great thing for his dad. Meanwhile, Dr. Bensch follows Kiki into the dressing room only to be surprised by Griffin. Bensch claims to be looking for the bathroom and Griffin sends him off. He checks on Kiki, who starts crying about the stress she’s under. Ava spots them together and runs. She heads on stage and sings “You Don’t Own Me” with a group of male dancers. Sonny and Bobbie cringe throughout and Griffin furrows his brow. They don’t clap, but everyone else does. Scott is particularly enthusiastic, which appalls Bobbie and she refuses to sit with him anymore. Lucy runs over to Sonny and apologizes for letting Ava perform. He says he wouldn’t let someone like Ava ruin his night. Across the room, Ava tells Kiki and Griffin that she had a last-minute inspiration and changed her song choice. By the bar, Olivia gives the cook flowers and tells her what a great job she did on the menu. She asks if the cook wants to take over as the house chef for the hotel. That puts a smug look on the cook’s face, who guesses Liv wants to take over the Quartermaine kitchen. Olivia insists she will keep to her oath and stay out of it. The cook announces she’s been recruited by a top restaurant in Italy, so Liv can keep her flowers and her kitchen. Back on stage, Lucy gives a speech of thanks to all the performers and the people who donated. The Ball set a new record. The nurses of GH take the stage for the final performance of their annual song. Griffin and Ava leave together and Bensch tells Kiki he’ll see her in the morning. Back in the hall, Robert drags Valentin away in cuffs. Maxie and Peter are in his car when she goes into labor. He calls for an ambulance. They get out of the vehicle and he puts her on a picnic blanket, holding her hand as she takes breaths. He can see the head coming out. It’s a boy. The ambulance arrives. Maxie asks Peter to call Spinelli and get him to call her parents.

At Aurora, Spinelli is surprised when Sam and Jason tell him they are looking for proof that Peter is Henrik. Spin hacks into Peter’s email and finds incriminating messages. As Sam reads the messages from Henrik’s mom, Jason guesses Anna has double-crossed him. They debate what to do and whether Anna can handle it herself. Peter calls Spinelli and informs him that Maxie has had her baby. The Jackal is shocked to hear that August delivered the baby. Jason makes him dig through more messages. They find the one that Anna sent, arranging for a meeting. Jason decides to head to the pier.

Peter returns to his car and gets out his gun.

Anna goes down to the docks to meet Henrik. She recalls all the warnings that Jason gave her. Peter comes down the steps. She’s shocked and confused. He makes it clear that he’s Henrik. He can’t believe the authorities have sunk to her pretending to be his mom to flush him out. Anna claims he doesn’t understand. He pulls his gun out.

At the hospital, Kim checks Maxie and the baby over. Maxie wonders where Peter is.

Peter feels as though he’s been betrayed.

Sam attempts to be helpful.

Maxie's Water Breaks, As Jason and...