Curtis Proposes to Jordan & Finn Declares His Feelings for Anna

Thursday May 17, 2018: Residents of Port Charles perform in the ball, Peter learns Anna is still trying to find him, Sam snoops in Peter's office, and Finn suspects Anna is dying. 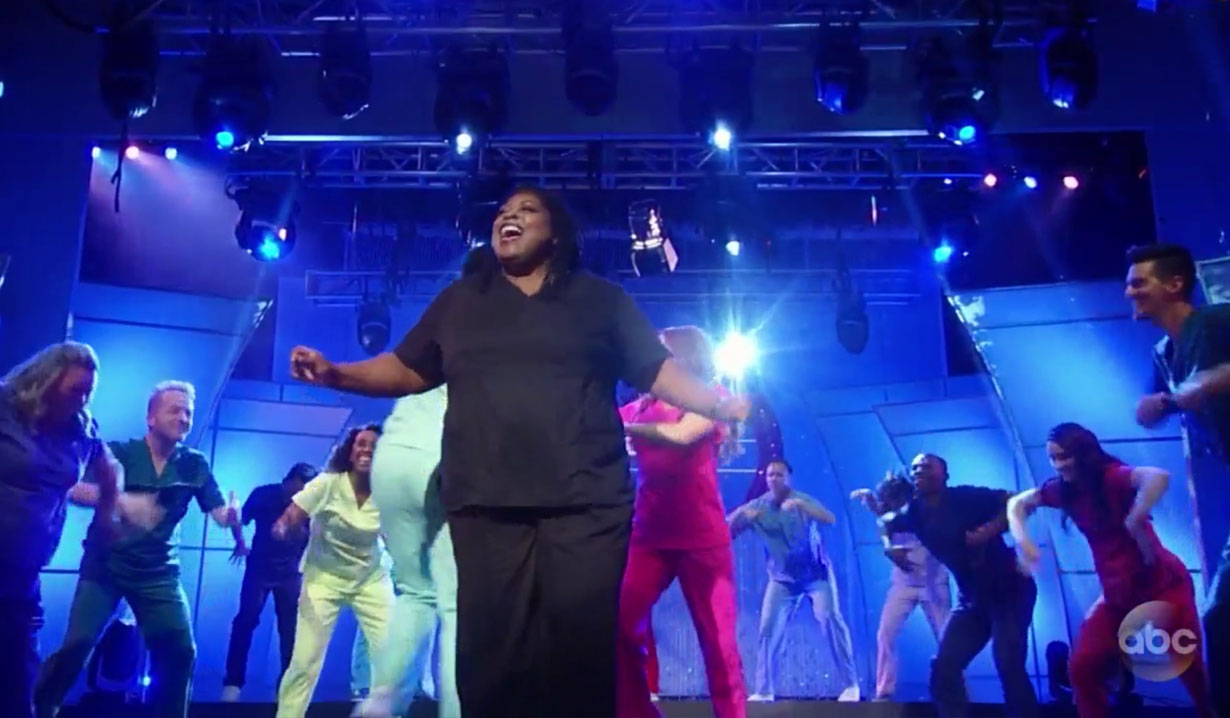 Before the festivities begin at The Nurses’ Ball, Lulu tells Peter that she has been contacted by someone claiming to be Henrik’s mother and Anna is helping her flush them out. Lucy takes to the stage and welcomes everyone to the 2018 ball. The General Hospital nurses, led by Epiphany, perform the opening number, “Everyday People.” Felix, Bobbie, Amy, Deanna and others join her. After, Lucy thanks everyone for attending, points out their sponsor Olay, and reminds people to donate. During a break, Jordan runs into Chase, who continues to go on about the rest of the force not wanting to rehearse their number with him. Meanwhile, Curtis speaks with Stella, who promises not to bother him and Jordan and think that they should have a good time tonight. Bobbie talks with Mike and Sonny at their table and borrows Sonny to discuss Carly’s situation. Sonny hates having to be away from her tonight, but Mike insisted on coming to the ball. At their table, Robin and Emma notice Anna is preoccupied with her phone. Robin thinks she’s waiting to hear from Finn, but Anna is trying to get in touch with Robert. Robin deduces this is about Henrik. Finn, remembering seeing Anna’s will in Alexis’ pile of papers, stops by the table to chat with Anna. He inquires if she will be performing, but Anna says those days are over for her. Elsewhere, A nervous Nina longs for a cigarette, and Peter and others tell her smoking is gross. Out in the Metro Court bar, Valentin makes a call about his one-way trip out of town when Valentin confronts him about Anna setting him up. He assumes Valentin knew, which is why he’s making arrangements to flee. He won’t let that Valentin leave him high and dry. Sam lingers nearby as they argue. Peter vows to take care of Anna on his own. Back in the ballroom, Chase speaks with Lulu about his and Dante’s performance when Lucy grabs him because it’s time. Lulu asks Dante why Chase thinks they are performing together. Dante goes backstage to the dressing room and confesses to Chase about his little lie right before he is to go on. Miffed, Chase takes the stage on his own. Chase sings “Feel It Still” by Portugal The Man, and is backed up by dancers.

More: Videos of past Nurses’ Balls Sam sneaks up to Peter’s office in Aurora determined to find out what he’s hiding. She snoops through his desk. She is narrowly caught by the janitor, and explains she had to come find and important contract. Later she finds Faison’s lighter among his things, and recalls Peter earlier chastising a nervous Nina for wanting a cigarette because it’s a disgusting habit. She notices the initials on it and realizes its Faison’s lighter. Back at the ball, Dante apologizes to Chase for setting him up. Jordan informs Dante to take a page out of Chase’s book next year, and that Chase did the department proud. Lucy introduced the next act, a magic act by Nina and Curtis. After a few tricks, Curtis brings Jordan on stage for part of the act and proposes to her. From the audience, Stella shakes her head and rolls her eyes as Jordan accepts. The crowd applauds, and red hearts fall from the ceiling. The proposal gets to Maxie and makes her think about Nathan. Peter comforts her and gives her his handkerchief. That reminds her that Nathan did the same the night they met. He takes her out to the Metro Court lobby to relax. At her table, Anna gets a response from Henrik asking her to meet him at the pier at midnight. As people mingle, Sonny and Robin share a hug and reminisce about Stone. Robin gives him her sympathies regarding his father’s illness. Lucy returns to the stage to announce that Mac and Mr. Marbles couldn’t make it tonight, so they are moving on to the presentation of the first annual Port Charles’ pioneer award. She asks where Dr. Finn is, but nobody seems to know. Lucy is unnerved, so Joss offers to introduce her mom for the award. Back stage, Finn runs into Anna, who is preoccupied with the message from Henrik. He states he knows the truth, which she thinks is about Henrik, but he mistakenly thinks she is dying. He admits he never stopped caring about her, which a nearby Alexis overhears.

Nina asks Valentin what is going on.

Finn apologizes for taking so long to tell Anna the truth.

In the hospital, Nelle’s fetal monitors go off.

Oscar hugs and thanks Drew.

Jason warns Sam that somebody is going to get hurt.

Maxie's Water Breaks, As Jason and...