Wednesday May 16, 2018: Olivia has to make a difficult deal, Mike insists on attending the Ball, and Kiki gets a surprise. 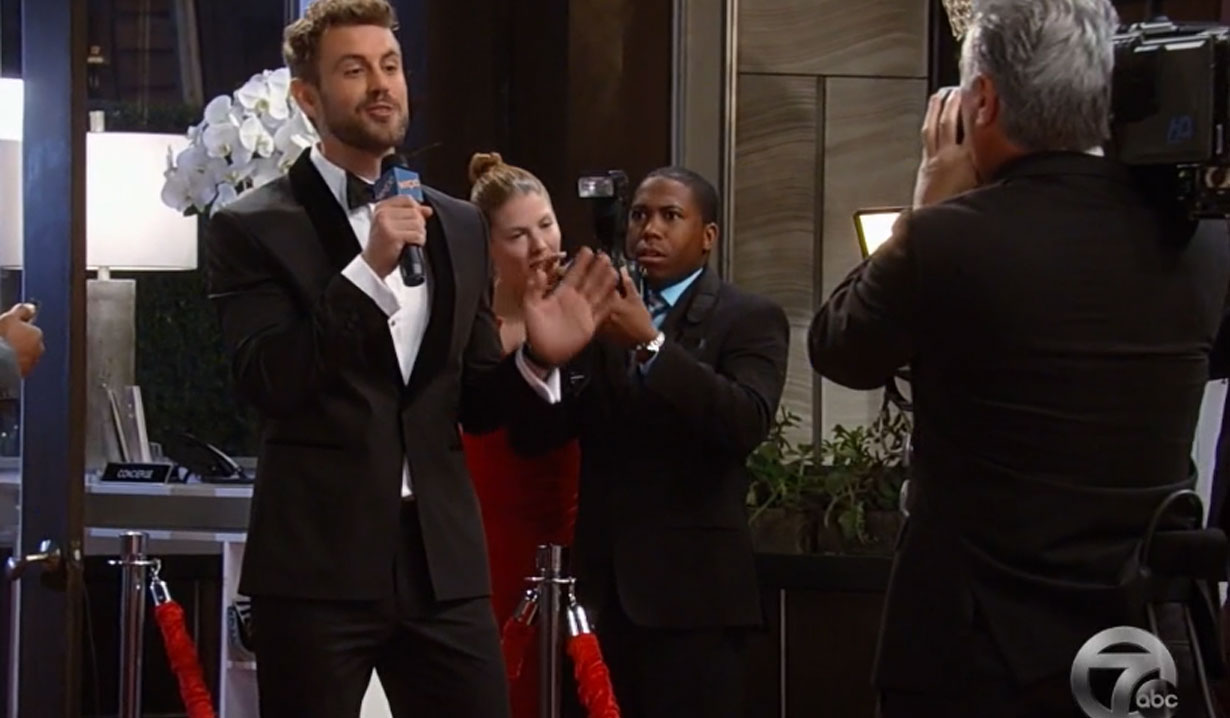 At the hospital, Dr. Bensch hands an exhausted Kiki a bundle of work to do. Molly calls and asks her to the Ball, but she can’t make it. After hearing this, Bensch tells her to take the night off and go to the Ball. In his office, Finn thinks about seeing Anna’s will when Alexis interrupts to take him to the big event.

Peter sits in his office at Aurora, playing with his lighter and looking at his email exchange with his mother. Maxie enters in her shimmering dress. He has a gift for her. She’s gobsmacked to see it’s a beautiful necklace. It’s too much but she never returns jewelry. Peter slips it on her. In their room at the Metro Court, Nina shows off her dress to Valentin, who is impressed and wants to whisk her away for a vacation. She’s startled that he means tonight but agrees to think about it. Down the hall, Robin shows up at Anna’s room and notices how distracted she seems. She assumes this is about Finn. Anna says it has nothing to do with him and goes off to get dressed. Jason drops by and tells Robin that her mom is fixated on Henrik. He encourages Robin to stick close to her. After Robin heads out, Anna reappears and explains she’s waiting to hear back from Henrik. Jason reminds her that they agreed to go after him together. Outside the Metro Court, the Nurses’ Ball host (played by Nick Viall) on the red carpet is interrupted when Franco takes the reins and does the introduction for Liz, who is startled. She tells the viewers that they’re in for a treat tonight. Nina rushes over to join the host. They welcome Oscar and Joss, who kiss and pose for the cameras. Jordan and Curtis come down the carpet next. Nina jumps up and down as she makes cryptic encouragements to Curtis. Next, Maxie and Peter arrive. He happily watches as she talks to George Pennacchio about the fashions at the Ball. She and Peter walk down the carpet together. August says it’s a night to expect the unexpected. Valentin arrives and glares at him before heading over and embracing his wife. Backstage, Lucy fusses and worries over the Ball, trying to tell herself that everything will be fine. She goes off to moan about the catering to Olivia, who runs away. Meanwhile, Jason joins Spinelli behind the scenes. They discuss how to approach the Carly problem. Spinelli tracks down Maxie and fawns over her. He takes her off to find a chair and Sam thanks Peter for looking out for Maxie. The guests continue to arrive on the red carpet. Finn comes in with Alexis but Anna trips into his arms. He runs back to Alexis while Robin taunts her mom about the doctor. At the Quartermaine estate, Olivia tells the Cook (played by The Chews’ Carla Hall) that there is a problem with the catering for the Ball and she needs her help. The cook tells Olivia that it’s her hotel and she can do the cooking. Olivia begs until the cook eventually relents, but only on the condition that Liv swears never to set foot in the Quartermaine kitchen again. Reluctantly, Olivia swears and they shake on it.

Robert looks around his cell and wonders how he can get out. After searching the walls, he collapses.

At the Corinthos compound, Jason tries to convince Sonny that Nelle must be lying but Sonny remains unconvinced. After Jason exits, Stella arrives and Mike comes out to chat with her. He’s surprised to hear it’s the night of the Ball. Mike insists that they all go and runs off to get into his tux. Sonny doesn’t think he can go but Stella reminds him he won’t have another chance like this with his father. Mike returns and says that Stella will be his date.

More: Highlights from past Nurses’ Balls

Back on the red carpet, Sonny smiles as Mike insists on posing for the cameras with Stella. They drag Sonny in to pose. Lucy comes down the carpet next, with her llama, Dutch. Inside the ballroom of the Metro Court, Jason bumps into Sam while the room is empty. They chat about the Henrik case and he tells her she looks beautiful before he heads out. All the guests begin to file in. Robin and Liz catch up and the nurse tells her how great her life is. Valentin corners Anna at the bar. She claims she’s taking a break from the Henrik investigation and is sure Robert can handle it. Across the room, Kiki tells her mom how much she’s looking forward to her performance. Bensch pops up behind her, to her surprise. Olivia rushes in and tells Sonny there was a crisis with the food, but she’s handled it. It’s finally announced that the Ball can begin.

Stella sees something that leaves her horrified.

Ava Threatens Nelle with the Baby...