Tuesday May 15, 2018: Jason believes Carly's version of what happened, Sonny fears Carly is having another breakdown, Drew turns to Andre for help, and Valentin fumes over Peter's latest blunders. 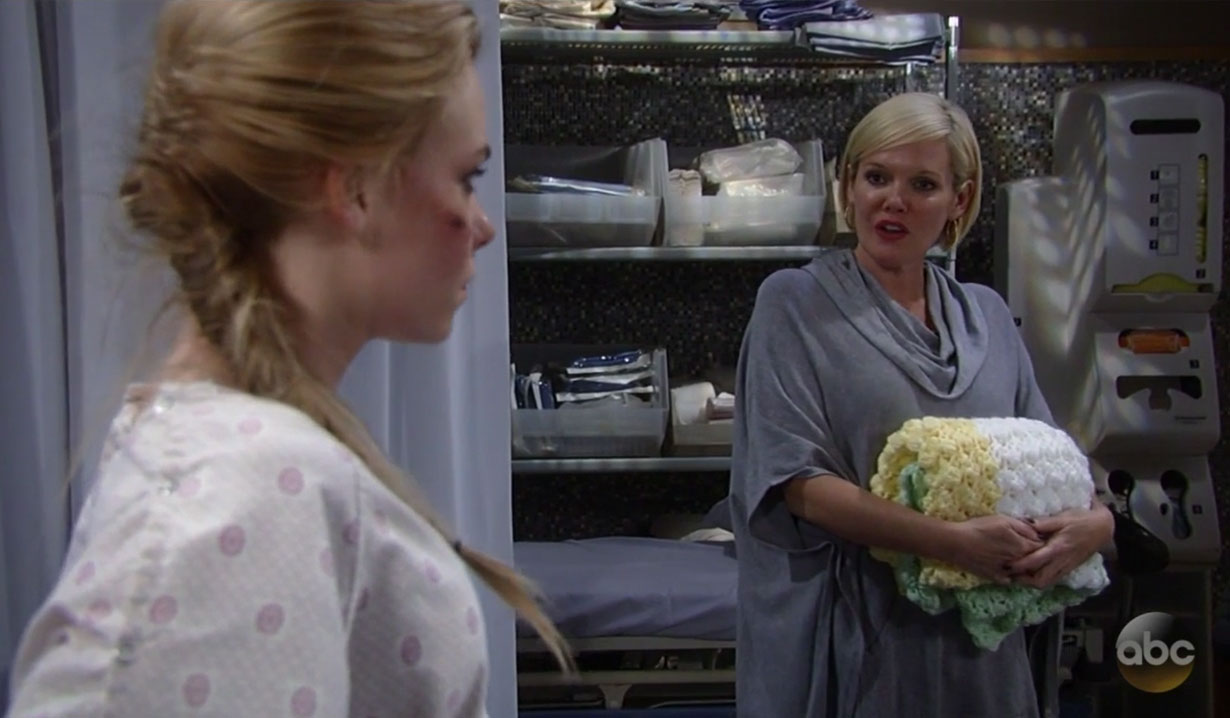 At the PCPD, Sonny, Jason and Diane go into the interrogation room to see Carly, who informs them that Nelle set her up. Carly details the fight in the nursery and the missing blanket just like Morgan’s. She explains Nelle has been behind all the strange occurrences, but Sonny doesn’t think she could have made the blanket disappear given her circumstances. Sonny and Diane excuse themselves and Sonny worries to Diane that Carly is heading for a breakdown. Back in the other room, Jason believes Carly and promises her everything will be okay. He leaves to speak with Sonny, when Diane reveals Carly has to spend the night in jail as her hearing isn’t set until tomorrow.

More: GH blog on the baby drama ahead At the hospital, Nelle sees Michael sleeping in a chair and screams, “No Carly!” as if she’s having a nightmare. He stirs and rushes to her side, and she cries over the fake nightmare. Kim interrupts to check on Nelle, performs an ultrasound and assures them the baby is fine.

More: Nathan West and other blatant shirtlessness on soaps In the Metro Court ballroom, Griffin watches as Ava practices her routine and tells her that she’s going to be great. Valentin sits at a nearby table and works on his sheet music for his performance. He receives a text from Peter, who asks if he’s sure Anna Devane has been taking care of. He rushes off. Meanwhile, Lucy speaks with Alexis about the award she’s receiving for community service when Finn arrives. Alexis asks how he got roped into the ball. He reveals it was due to her award, which he is presenting. They rehearse the presentation, and Lucy thinks they need to jazz it up. She accidently knocks over Alexis’ briefcase while showing her how to sashay, and Finn notices Anna’s will fall out. Out in the bar, Peter sees Anna on a laptop and tries to make small talk about Robert and Faison, but she brushes him off. Peter leaves and Anna spots and hugs Griffin as he leaves the ballroom. They catch up and Griffin figures out she’s still looking for Henrik. She informs him that she’s getting close. He gets a text and has to leave claiming a patient needs him. Andre meets with Drew in the Aurora offices where Drew asks him if he can remove Jason’s memories from his head. Andre warns that he may not survive the procedure, but in theory it may bring back his original memories that could be buried in his mind. Drew is willing to risk the procedure. Griffin walks into Peter’s office and warns him to either confess who is or leave town, otherwise he will be exposed and at the mercy of others. Griffin storms off, and Valentin enters and asks what is going on with him. Peter admits Griffin knows the truth. Valentin screams, “You’ve screwed us both!” Peter swears he’s taken care of Griffin, who has agreed to keep his secret, but Valentin worries about how close Anna and Griffin are. He fears Griffin may tell her the truth, and Anna will know he’s been lying to her about Peter. Peter feels that’s why they need to take care of Anna. Valentin leaves and places a call for three one-way tickets out of the country. Later, Drew stops in to see Peter and inquires if he’s seen Sam. Peter hasn’t. Drew asks Peter to let Sam know when he sees her next that he may have a way to get back everything he’s lost. Back at GH, Ava peeks in on Nelle. Nelle asks Michael to get her some orange juice, so he leaves. Ava slips into Nelle’s cubicle, chastises her for setting her up, and reveals she swiped the baby blanket before the cops could find it. Nelle begs for the blanket, but Ava decides to hang onto it just like the photo of Griffin’s phone that Nelle is holding onto to blackmail her. Out in the hall, Dante runs into Michael and needs to talk to Nelle about what happened. Dante and Michael enter Nelle’s room, and Dante questions her about what happened. Nelle spins a tale of lies, claiming Carly came after her, said everyone would be better without her and pushed her down the stairs. Dante brings up the blanket Carly mentioned, but Nelle says there was no blanket. Dante and Ava leave, and Nelle urges Michael to go have fun at the Nurses’ Ball tonight, but he refuses to leave her side. Nelle asks him what he thinks will happen to his mom.

Dante returns to the station and lets Carly know the baby and Nelle are fine, and instructs Sonny, Jason and Diane they have to go now while they transfer Carly to lock-up. Carly asks Sonny to tell Michael that she loves him and his baby, and he’s taken away.

Anna is thrilled to see Robin.

Peter has a gift for Maxie.

Carly Is Arrested for Pushing Nelle...