Monday May 14, 2018: Sonny and Jason come up empty, Valentin tries to reassure Peter, and Anna learns Finn has a brother. 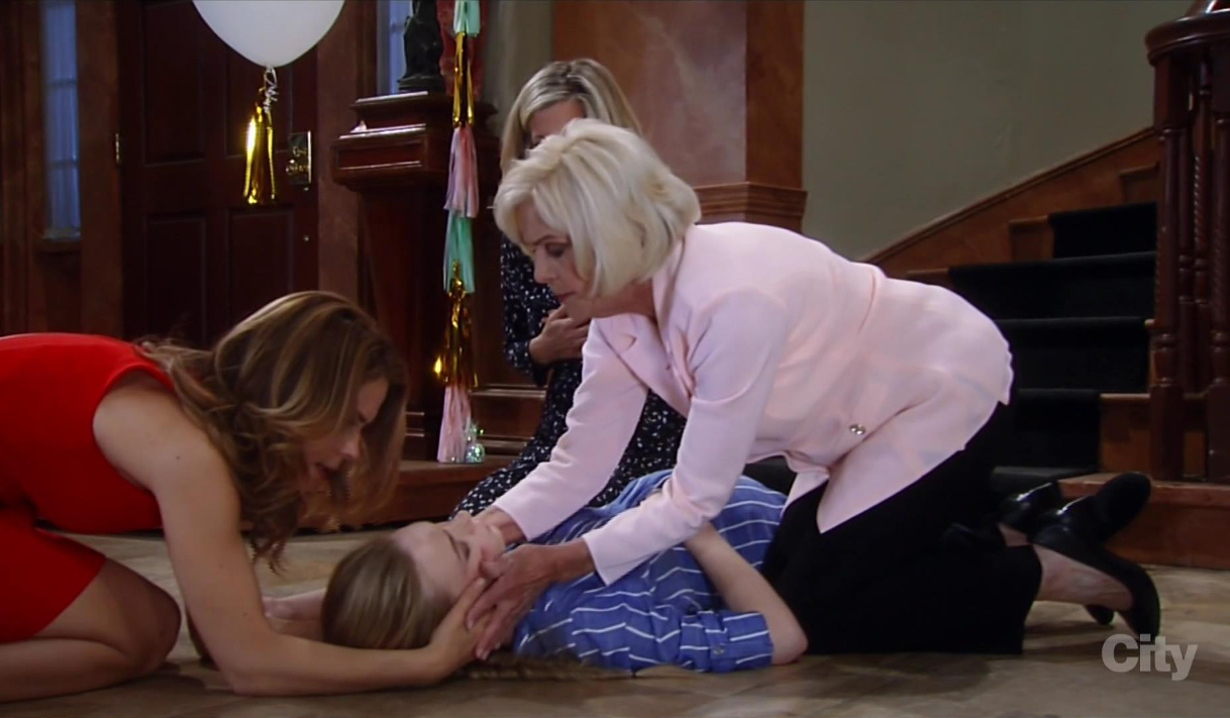 At the Croton site, Jason stops digging and tells Sonny there is no body in the hole. Sonny refuses to accept this at first and kicks himself for leaving the gun with the man he murdered. Jason repeats that the gun and body have been moved. At the Quartermaine estate, Nelle and Carly fight over a blanket until Nelle falls down the stairs. Monica, Olivia, Brad, Ava and Joss all run out and find a bloody Nelle on the floor. Monica sends Brad to call an ambulance while she examines the injured woman. Carly tells her mom and Joss that Nelle just fell. Monica sees there are no contractions or pulse. Joss and Brad go out to the ambulance. Once Nelle is taken away, Ava follows, praying the baby will be alright. Bobbie tells Carly they can go and meet Michael at the hospital. Before they can, Monica storms over and asks if this is an accident. She reminds Carly that she lost a baby on the same stairs 20 years ago and refuses to let them leave. She’s calling the cops. Michael and Dante go to The Floating Rib to celebrate Michael’s baby. Chase joins them and says they should be rehearsing for the Nurses’ Ball. Dante assures him they don’t have to worry about it. Dante and his brother discuss fatherhood. Michael says he’s finally come to some common ground with Nelle. Across the room, Anna and Jordan talk about the bar’s re-decoration. She’s sure Curtis will love it. Anna keeps checking her phone. They sit down and Jordan asks about the Henrik investigation. Anna changes the topic to Curtis. Jordan tells her about the proposal and admits that, even if she loves Curtis, she’s not ready for marriage. She looks over and spots Finn then starts quizzing Anna about him. Anna insists they were not ‘meant to be’. Jordan urges her to have a drink with him. Before Anna can, Alexis joins him. Chase breezes by and bumps into Jordan. They chat while Anna interrupts Alexis and Finn. They share some awkward small talk until Chase interrupts. The women head to a table and Chase gets a call about an ambulance being called to the Quartermaine estate. At the same time, Joss calls Michael and tells him he needs to get to the hospital. Once the cops take off, Anna asks Alexis what’s up with Finn and Chase and is informed that they are half-brothers. Later, she manages to corner Finn and asks him about his brother. “We both have our secrets,” he says, avoiding her.

Sonny and Jason return to the Corinthos compound. Sonny hopes that he can get through to his father to see what else he knows. He thanks Jason for his help. Stone Cold points out that the body must have been moved some time ago so there may be nothing to worry about.

Lucas is looking over Nelle at the hospital when she wakes up. Michael and Dante arrive. Nelle tells them that Carly pushed her. Ava arrives and explains that Carly became unhinged after the penguin incident. Nelle says that Carly did it on purpose. Lucas orders everyone out.

Chase arrives at the Quartermaine estate and asks questions about what happened. Bobbie claims Nelle simply fell but Monica insists that Carly has been making the young woman’s life difficult and was badgering her all through the party. No one saw the fall. Olivia is vague at first but admits that tempers were high. Carly insists that Nelle was torturing her with the blanket and fell down the stairs on her own. The detective checks out the stairs but there is no sign of the blanket. Carly insists that the blanket was real and she’s been tormented for months. She rails and her mom tries to calm her down. Before she can storm out, Dante arrives. He explains that Nelle claims Carly pushed her. Taking out his cuffs, he places her under arrest.

In his office, Peter reads over the anonymous message from Anna that warns him not to trust Valentin, who instantly pops up and notices he’s on edge. Peter claims it’s because he could be facing a prison or death sentence. Valentin suggests he leave town and claims that he’s managed to halt Anna’s investigation of him. Peter tells him that Sam is continuing her investigation and he’s staying at Aurora. Valentin reminds him of everything they have in common. Peter has always appreciated his support. He’s gotten far more out of this relationship than Valentin has and wonders why. Valentin says they are friends and he just wants to help. Mentoring him has meant a lot and he’s proud of him. Once the Cassadine leaves, Peter reads the email again and writes back, asking for proof that she’s his mother. She knows his birthday.

Things are not looking up for Carly.

Kim has some positive news.

Ava gets some power back.

Nelle Falls Down the Stairs After a...

Ava Threatens Nelle with the Baby...