Wednesday May 9, 2018: Oscar and Drew discuss his past, Kim worries about her son to Julian, and Sonny has an idea for Carly. 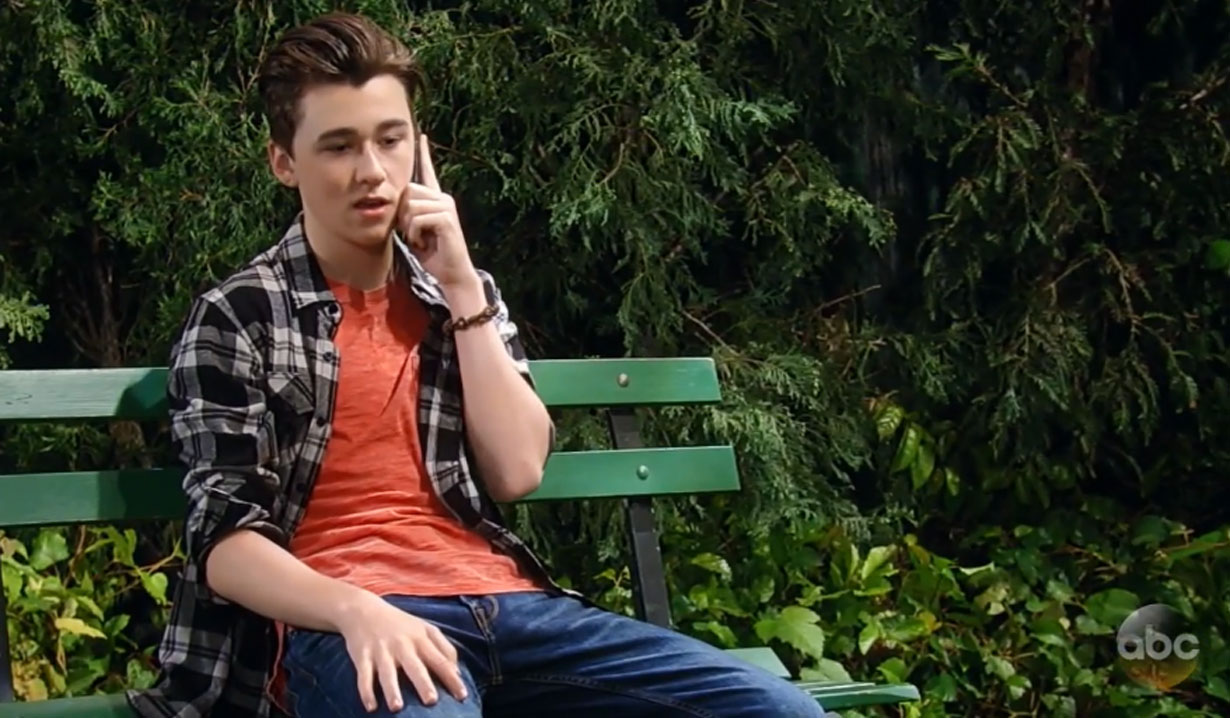 Drew joins Oscar in the park and they talk about the hike they have planned. Before they can go anywhere, Oscar explains that he twisted his knee rehearsing for the Ball. Drew assures him missing the hike is okay but he needs to go to the hospital. Oscar wants to talk first. They try to discuss Drew’s life but he can’t remember much of it. His son thinks he should try to find the person who can help him get his memories back. Drew wants to give it a shot. Julian stops by the hospital to visit Kim with iced coffee. She starts to worry when she checks the weather and sees there will be a storm. She’s afraid her son will catch a cold while hiking. Julian talks her out of calling him and suggests Drew can look after Oscar. When Lucas pops up, Julian tells him about how he wants to be there for his grandchild. Lucas clears his throat and steps away. Kim is sure that being cut out of his grandchildren’s lives must be awful. The topic turns back to Drew and she admits that she’s worried Oscar might not be macho enough for his father. She thinks that Oscar may already idolize his father too much. Julian is sure that she will do the right thing. Drew and Oscar stumble in and she rushes over to them. They fill her in on his little injury and Kim nearly bites Drew’s head off. He points out her child is fine. Julian takes off and Kim wheels her son off for an x-ray. Drew calls Andre and tells him he wants his memories back. At the Metro Court, Joss spots Carly calling to cancel her appointment with Kevin. When Carly pops a pill, her daughter rushes over to question her. Carly claims they are just for relaxation. The topic turns to Nelle. Joss reminds her mom that Michael is an adult and needs to make his own decisions. She also reminds her that she’s alive because of Nelle’s kidney and suggests she’s reformed. Carly promises to try to tolerate Nelle. Sonny is working out at the gym and thinking about his recent arguments with Carly and how unstable she seems. Michael interrupts and asks why his mom is seeing Kevin. Sonny explains she’s had a few hallucinations about Morgan. They discuss Nelle until Carly interrupts, assuming that they are siding with her enemy. After she blows up at them, she calms down and assures them that she is learning to be civil with Nelle. Carly asks Sonny not to worry about her. “Too late,” he says, suggesting she take off to Puerto Rico for therapy. Once he’s taken care of his father’s situation, he’ll join her. She likes that plan. They kiss. At the gallery, Nelle gives Ava a gift to bring to her shower. Ava wonders if it’s ticking. “It’s not a bomb, but it will make Carly’s head explode,” Nelle tells her, making her sign the card that goes with it. She’s evasive about what she’s planning. Brad interrupts and tells them he and Lucas are expecting their child around the same time as Nelle. He wants to buy some duck-related art from the gallery to decorate his child’s room. Ava offers to see what she can do and leaves them alone. Nelle tells Brad about how amazing being pregnant is and everything she plans for the baby. She’s sure that she and Michael will be back together soon. Ava returns with a quote on an artwork but it’s too high for Brad. After she wanders off again, Nelle and Brad discuss how much loot they are in store for. She invites him to the shower and promises it will be an event to remember. Once he leaves, Nelle tells Ava that Carly is going to be exposed as a ‘raving lunatic’. Ava warns her not to under-estimate her enemy. When Nelle mentions she’s been ‘haunting’ Carly, Ava has some questions but gets no explanation. Nelle rubs her nose in how great her child’s life is going to be compared to Avery’s.

In the park, Brad tells Lucas that they’ve been invited to the shower. Lucas says he’s busy. Michael and Joss bump into them. Joss gives them all babysitting coupons.

Carly is taken by surprise.

Finn has some explaining to do.

Carly Explodes Over Ava’s Gift at...