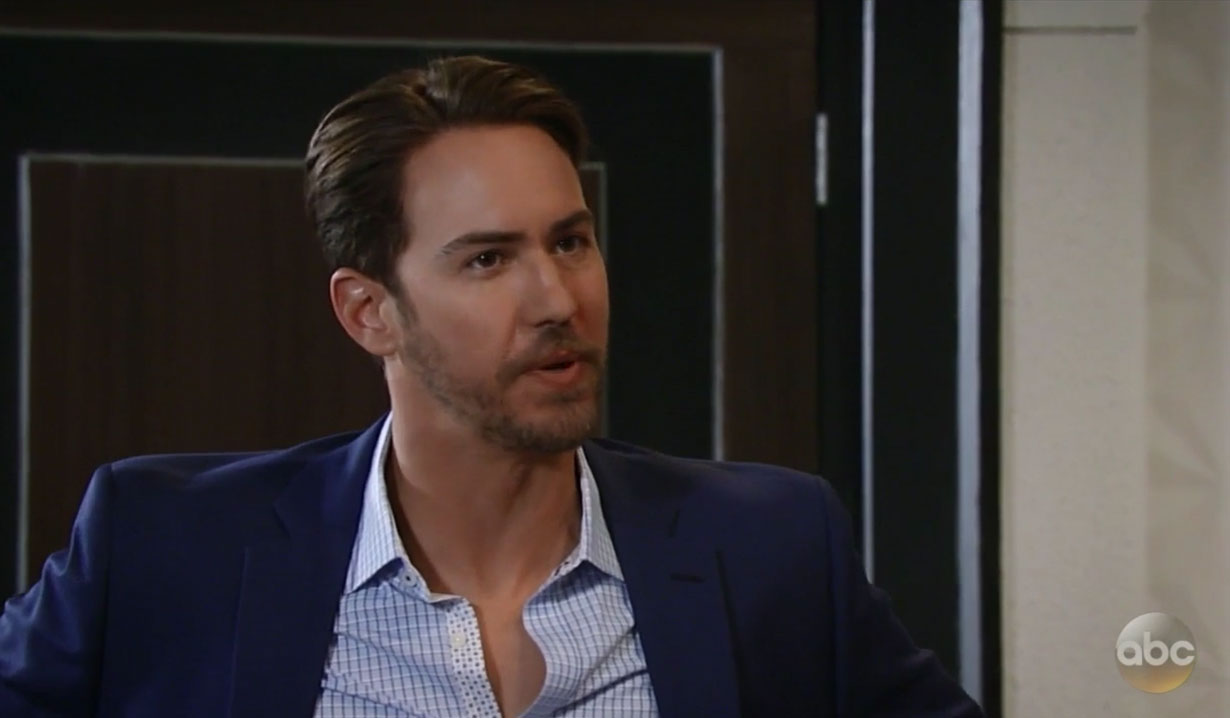 At Sonny’s gym, Jason walks in and finds Drew working out. The two discuss what happened in Switzerland. Jason tells him the flash drive and letters were missing from Faison’s safe deposit box. Jason was hoping to return Drew’s memories and admits he doesn’t like that they share his memories or anything else. Drew says if he’s referring to Sam then that will be tough because they share a daughter. Jason only wants Sam to be happy, but Drew accuses him of playing Sam by stepping aside only to reel her in. He reminds Jason he knows how he works, and that Sam was happy with him before Jason came back. Jason won’t apologize for returning, but that doesn’t mean Drew can’t live his own life. Jason is sure Henrik has the flash drive. Drew tells Jason to do what he has to do, but he is also going to do things his own way. Sam stops by Crimson to see Maxie. Maxie explains she has decided not to remain stuck in pain, bitterness or the past any longer. Sam wonders if that applies to her friendship with Lulu as well. Maxie wants nothing to do with Lulu, and quickly turns the conversation to Sam. She asks why she is back at Aurora after deciding to leave. Sam says it is complicated. Sam heads to see Nina in her office. Nina let’s Sam know that she is the one who hired Curtis, however she’s calling off the investigation because it turns out Peter has no nefarious agenda. In Peter’s office, Valentin informs him that Robert has been taken care of, but Peter believes they have to get rid of Anna too. Valentin stutters, “No! Don’t you go near her!” Peter reminds Valentin that his father had a weakness for Anna and it seems he does too. Peter warns Valentin that sooner or later Anna will figure out what happened to Robert and trace it back to Valentin and then make the connection to Faison. He again states that Anna has to go. Valentin tries to reason with him and says even if he manages to get rid of Anna that Jason will have questions and come for him. Peter gloats that he has been playing Jason for a while now, and he kept him alive because he knew one day he could sick him on Faison and get rid of the old man. Sam walks in, and Valentin explains he stopped in looking for Nina. She tells him that she’s in her office, so he leaves. Peter heard Sam came to his office while he was out. She claims she was going to tell him she planned to leave Aurora, but she’s changed her mind. She sees he seems disappointed and asks if he has a reason to get rid of her. Up in the Metro Court bar, Anna meets with Lulu, who has been emailed by both Henrik and his mother. Maxie walks into the bar, approaches Anna and asks for a moment with Lulu. Anna excuses herself, and Maxie asks how her injured foot is. Lulu says it’s getting better. Maxie turns to leave, but Lulu stops her and says she’s not going to give up on their friendship. Maxie thanks her for the donation she and Dante made to Nathan’s charity. She leaves, and Lulu continues to talk with Anna about her contact with Henrik and his mother. Lulu plans to email Henrik and the mother, and she promises to keep Anna up to date with what she hears back. Back in Nina’s office, Nina shows Maxie the scrapbook on Nathan that Peter made for them. They look through it as Valentin watches from outside the door. Valentin calls Anna and asks to meet her down by the docks. She refuses and tells him she’s far too busy right now.

Franco returns home to Liz. He fills her in on his meeting with Steven, who gave him an envelope of certificates. Alexis meets with Ned and Olivia at the Quartermaine mansion to discuss the lawsuit against the city. Ned accuses her of wasting time with a lawsuit that she knows she can’t win only to remain in the public eye so she can run for mayor again. As they bicker about motives and dollars, Liz and Franco walk in and Franco announces that he has a way they can all win. Franco hands over certificates of transfer of all Niagara Equities’ capital to the city of Port Charles. It’s enough to rebuild the city, and Franco reveals the certificates are valid and signed by Steven Blake the VP of finances at Niagara.

Drew comes across Oscar, who says he has to tell Drew something.

Julian warns Kim that she can’t get in the middle of this.

Ava wonders what Nelle has in store for Carly.

Carly tells Joss that Nelle doesn’t make it easy. Joss asks what she did now?