Nelle Blackmails Ava Into Sticking to the Plan Regarding Carly

Monday May 7, 2018: In today's General Hospital recap, Franco meets with Steve, Ned gets some bad news, and Jason spends some time with Jake. 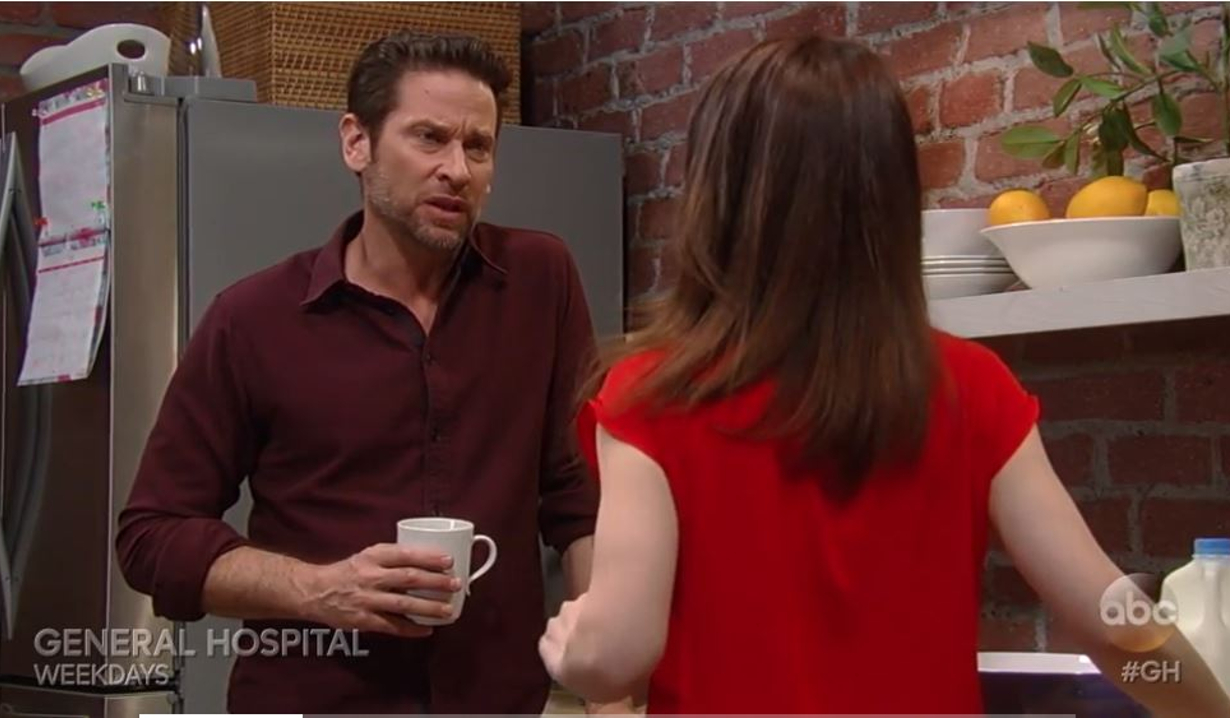 In Liz’s kitchen, she and Franco discuss his meeting and Jake’s birthday party. After he leaves, Jason stops by with a gift for his son. Jake jogs in and awkwardly talks to Jason about his birthday plans. He accepts Jason’s card but says he’ll open it later. At Liz’s encouragement, Jason sits down with his son and they talk about school. Jason can’t follow the math discussion. Spencer calls and the kid runs off to answer. Liz assures Jason that it will just take some time for him to get close to Jake again. She tells him how great Franco has been with Jake. She’s sure if Jason knew Franco’s whole story, he’d realize why she has faith in him. Jake returns and decides to open his present while Jason is there. It’s tickets to a minor league game. Jake invites him. Jason wouldn’t miss it.

Kim drops in at Charlie’s and confronts Julian about how he treated Drew. He apologizes. Grumpy Alexis arrives followed by Curtis, his aunt, and Molly. They all want to sue the developers. Lucy intrudes and worries that protests may increase property devaluation. Alexis isn’t convinced a lawsuit is a good idea. It would get bogged down in the courts for years and cost a fortune. The lawyer does have an idea though… Later, Curtis only narrowly manages to prevent Molly from congratulating Jordan on getting engaged. Stella eavesdrops as Curtis fills Molly in on the delayed engagement.

At the Quartermaine estate, Monica (temporarily played by Patty McCormack) reluctantly agrees to Carly’s offer to bring macaroons to the baby shower. Nelle thanks Carly for forgiving her and apologizes for upsetting her with the baby name choice and asking her to sign the custody papers. Carly says she’d be happy to sign them if she has them drawn up again. It means a lot to Nelle that Carly has agreed to help with the shower. Once Nelle is gone, Monica asks Carly what she’s up to. When Carly drop her pills, Monica inquires about them and they bicker about AJ. Carly can’t understand why Monica is so blind to who Nelle really is. Monica tells her to stay away from the shower if she can’t be civil.

At the Metro Court, Ned moans to Olivia about how slow the repairs are going since the earthquake. To cheer him up, Liv shows him a video she made to try to entice people to the community. It features her talking to the camera while giving the viewer a tour of the city and chatting with Jordan and Griffin. Ned’s impressed and says she’s amazing. Later, Griffin shows up. He wants to register for an extended stay. Carly hears this and hopes it means he’s dumped Ava. It doesn’t. That doesn’t go over well and she rants about Ava killing her son before saying the doctor is the worst kind of hypocrite. Meanwhile, Alexis shows up and informs Ned that the residents of Charles St. are suing the city.

At Ava’s penthouse, she happily tells Griffin how miraculous it is to have Avery back. He’s happy for her, but it’s time for him to move out. This was just supposed to be temporary. She guesses that he can’t forgive her for what she did. Ava thought that he refused to judge her for anything. The doctor says he is not running away or judging, but he doesn’t like to see her reverting to type. They argue until Lucy bangs on the door and barges in to complain about Ava’s lousy contribution to the Ball. The check she gave her is blank. Griffin excuses himself and Ava cuts nosy Lucy another check. After Coe runs off to the bank, Ava guesses something is not right. She grabs Nelle’s pen and realizes it writes in disappearing ink. When Nelle arrives, Ava confronts her about this and tells her she wants out of whatever she’s doing to Carly. Nelle says she can’t do that. She’s accelerating her plan. When Ava still refuses, Nelle points out that she has the photo that Ava took of the DNA test. Ava gives in. Franco is startled to learn that Steve works for Jim’s company. Steve explains that he was a street kid and Harvey was good to him… for a while. Then he had nowhere else to go. Franco beats himself up about how he blocked what happened to him out of his mind. If he hadn’t, he might have saved other kids. Steve assures him that none of this was his fault. They need to let what Harvey did die with him. Nervously drawing, Franco wishes he could but doesn’t think it’s possible. He tells him about the damage that Harvey did with his illegal drilling. That gives Steve an idea.

Lulu asks Anna for some advice.