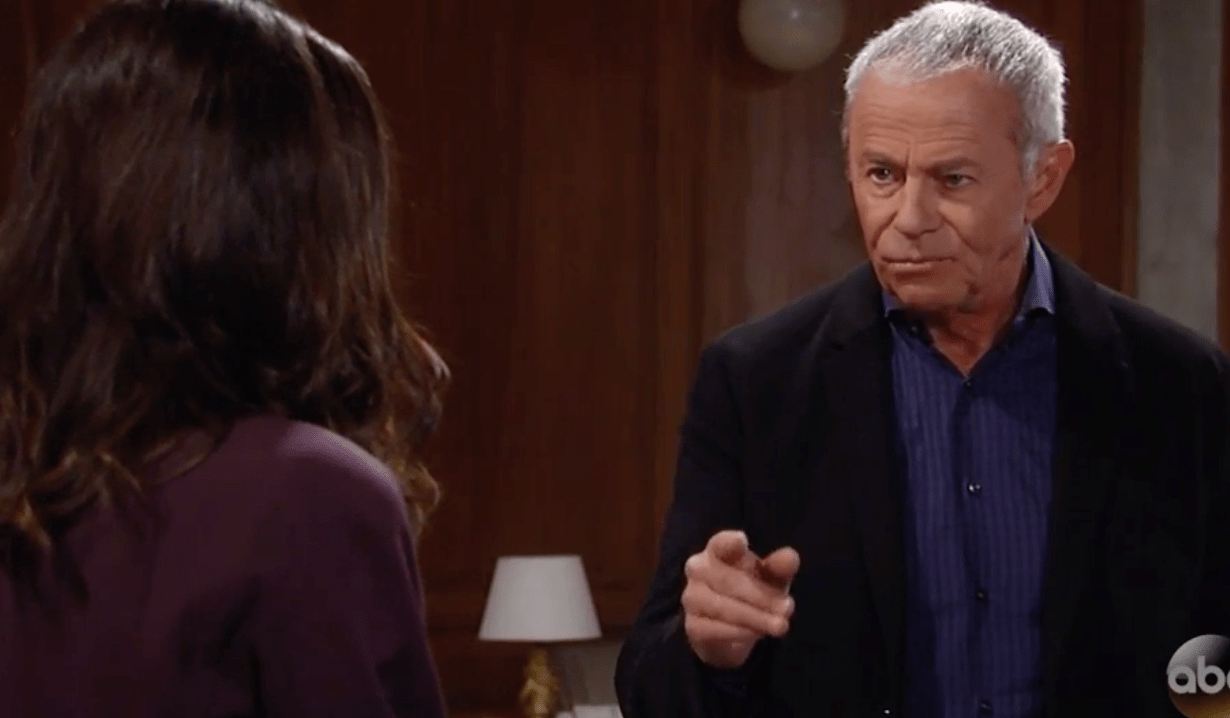 At home, Anna tells a photo of Robin she can’t let things go… even for her. Robert stops by. She fills her ex in on her meeting with Jason. They rehash the situation. Robert is worried Jason will kill Henrik. Anna doesn’t think that will happen. Robert gets a message about a case he’s been working on. She tells him to go. She’s got this. He tells her to take care of herself and to keep him updated. Once he’s left, Anna gets on her laptop. At the Metro Court, Carly makes plans over the phone to meet Joss at Kelly’s to shop for the baby shower. She takes her medication, as Sonny walks in. He’s worried about the stress of the baby shower contributing to her issues. Carly won’t let Nelle alienate her from the children she has left. Sonny gives her an envelope that was delivered to the house. It’s the papers naming them as the baby’s legal guardians. Sonny doesn’t trust Nelle, but suggests it’s a good thing. Carly thinks Nelle’s is working an angle they haven’t figured out yet. Nelle and Michael encounter Dante and Lulu at Kelly’s. They discuss pediatricians before Lulu gets snarky with Nelle. Nelle apologizes for making their family’s life difficult and hopes she can make amends. Nelle steps away, as Michael expresses his hope to Dante and Lulu that they can all get along. Lulu promises to for his sake. After Michael joins Nelle at the counter, Dante questions Lulu about her investigation into Henrik. Joss interrupts. She gives Lulu Oscar’s essay on Drew and asks for her help getting it published. Dante laughs over Joss being Carly’s daughter considering she’s doing it without Oscar’s knowledge. At the counter, Nelle tells Michael she had the legal guardian papers sent to Carly and Sonny. It’s her way of making peace. Back at the table, Dante thinks Oscar might not be pleased by Joss’ actions, but she’s undeterred. Lulu agrees to see what she can do. Pleased, Joss sits with Nelle after Michael has left. She wonders where Carly is. Dante steps away to get pastries for the station as Lulu receives a message from “Henrik.” Dante returns to a rattled Lulu. He asks what her message is about, but she plays it off.

Michael shows up to the Metro Court and asks his mother to back off Nelle. Carly refuses, gets a headache and walks away. Michael appeals to Sonny to try with Nelle for the baby’s sake. Joss finds Carly. She’s angry Carly didn’t show up to go shopping for the baby. Joss thinks something is going on with her. Carly insists everything will be okay. Meanwhile, Nelle joins Michael and Sonny, who plays at being nice. As Maxie talks to Nathan’s grave, Chet (played by Chris Van Etten) appears. He offers his condolences. He credits Nathan’s generosity for him getting clean. Maxie opens up about the fund Henrik set up and why she can’t accept it. Chet suggests maybe Henrik isn’t as bad as she thinks and that the money could do some good. Maxie admits she’s scared to not be angry. To not have a place to put her pain and grief. Chet counters once she lets go of the anger, she will be able to get back to the good things. She eventually agrees to accept the money. Nina confronts Peter in his office about the file on Nathan. Peter says it’s a surprise for her and Maxie. He thought they’d want all the memories. She becomes outraged when he says he reached out to Liesl and her mother for the info. She threatens to call her mother to expose his load of crap story. Peter tries to prevent her from doing so as Valentin enters. Peter again insists he did it to help Nina and Maxie’s grief. He apologizes for upsetting her. Unimpressed, Nina orders Peter to stop using her brother to look good in front of Maxie and leaves. Alone, Valentin tells Peter his plans for Robert are in motion. He leaves and Maxie enters to tell Peter she’s decided to accept Henrik’s money. Peter is happy to hear it, hoping she is softening towards Faison’s son. She’s curious why he cares and then feels the baby kick. She puts Peter’s hand on her belly and he’s delighted.

At Kelly’s Nina goes through Nathan’s file with Valentin. He has business to take care of and leaves. Nina calls Liesl for confirmation of Peter’s story. After she receives it, Nina calls Curtis to call off the investigation into Peter.

Robert finishes a drink on a private jet and becomes disoriented. Valentin shows up. He says, “Nighty night” as Robert passes out.

Olivia knows how to help Ned.

Franco is called full of crap.