Thursday May 3, 2018: Franco calls Harvey's victims to give them closure, Anna and Jason work on a plan to out Henrik, Nina remains suspicious of Peter, and Curtis wonders if marriage is for him and Jordan. 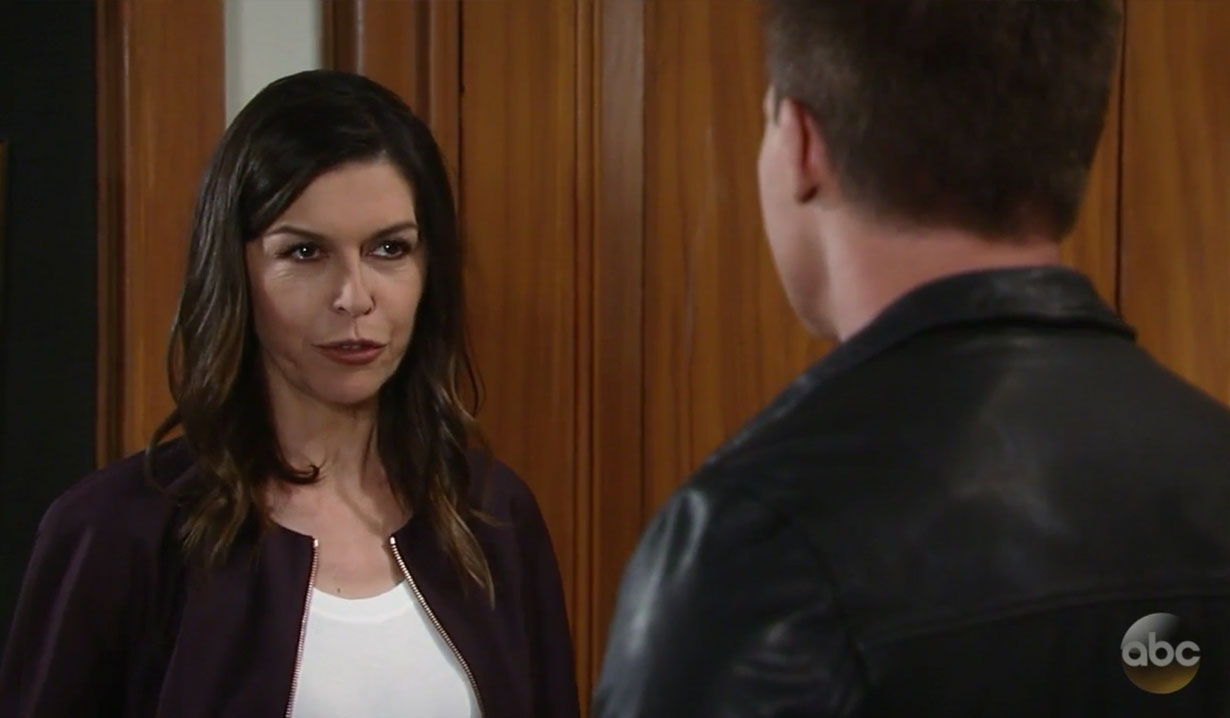 At Anna’s place, Anna suggests to Jason that she pretend to be Henrik’s mother to lure him out. Anna explains they’ll use Lulu, who has been communicating with Henrik, and that she will give her a story to publish on how she had tried to protect her son and was shocked to learn someone gave him to Faison. Jason thinks the story might work and play on his sympathies, if he has any. Jason asks what if Henrik takes the bait. Anna plans to meet him, but Jason refuses unless she gives him her word that she’ll let him be there because he feels her judgement is clouded in regard to Henrik and she could put herself in danger. She agrees. Jason leaves and Anna breaks down in tears. At Aurora, Maxie informs Peter that a mysterious person set up a fund for families of fallen or injured police officers in Nathan’s name. She wants to thank who did it and asks for his help to find out their identity. A quick search through the non-profits records reveals that PK Sinclair is the one funding it. Maxie fumes and wants Nathan’s name off it because she wants nothing to do with Henrik Faison. She excuses herself and storms out of his office.

At Kelly’s, Nina asks Curtis to dig deeper into Peter August. Later, Drew meets with Curtis and tells him that he and Sam are getting a divorce, but she is staying on at Aurora. Drew notes that the point of the company was for them to build a new life together, which has now gone down the drain. Curtis rants that he can’t believe all the hard work in building a new life can just blow up in your face. Drew gets the feeling Curtis is speaking about himself. Curtis fills Drew in on Jordan’s cancer scare, his proposal, and Jordan turning him down. He is beginning to doubt a marriage between them can even work, especially given the obstacle he faces with his Aunt Stella. Drew advises him that no blessing will ensure a marriage will work out, and if he loves Jordan then go for it. Curtis thanks him and gives him the number of an attorney who will help him with his divorce. At the graveyard, someone places yellow roses on Nathan’s grave. Later, Nina catches Valentin cleaning up the weeds, and she wondered who was putting the flowers down each day to make this place beautiful. He comforts her as she grieves. She reveals that Peter has a file on her brother and she wonders why. Valentin suggests he may feel guilty about Nathan’s death because Faison could have just as easily shot him, so perhaps he is trying to get to know him. Nina thinks he could be studying Nathan in order to get closer to Maxie. They leave and later, Maxie stops by Nathan’s grave. She talks to him about the fund set up in his name, which she knows he’d love, but she can’t get over that his maniac half-brother Henrik is behind it. She thinks he’d tell her to let it go, but she isn’t sure she can. She refuses to let Henrik use Nathan’s memory to ease his conscience. At Liz’s place, Liz finds Franco hanging up after speaking to one of Harvey’s victims and letting them know Jim is dead. Franco is down to the last name on his list, and he is glad he’s been able to tell these men that Harvey’s hold on them is finally broken. He admits doing it over the phone makes it easier because he doesn’t think he could come face to face with one of them. Franco talks about having to get to work, and Liz admits she likes watching him teach and work with the kids at the hospital. He knows she’s been spying on him, and so do the kids. He reveals the kids call her the gopher because of how she quickly pokes her head in and out, which she doesn’t find as funny as Franco does. Franco’s phone buzzes and he receives a text from one of Harvey’s victims who wants to meet and talk face to face about Jim.

Valentin and Nina go to the Metro Court, and when she spots Peter, Nina tells Valentin she’ll see him at home because she just remembered she has a video conference call. She runs off, and Valentin sees and confronts Peter. He warns him he is getting reckless, and that Curtis found his file on Nathan. Peter assures Valentin that he has things under control. Up in Aurora, Nina breaks into Peter’s office and looks through the file he has on Nathan, only to be caught by Peter. She demands answers about the file on her brother.

Check it out! On this day in soaps, May 3, 2007 Sonny Corrinthos ordered a hit on Lorenzo Alcazar.

Maxie thinks someone is watching her at Nathan’s grave.

Robert tells Anna that she’s working too hard to get herself killed.

Valentin finds Peter and Nina together. Nina tells her husband that Peter is lying through his teeth.

Nelle informs Michael that she and Carly will have to find a way to make peace.

Carly tells Sonny that Nelle has an agenda.