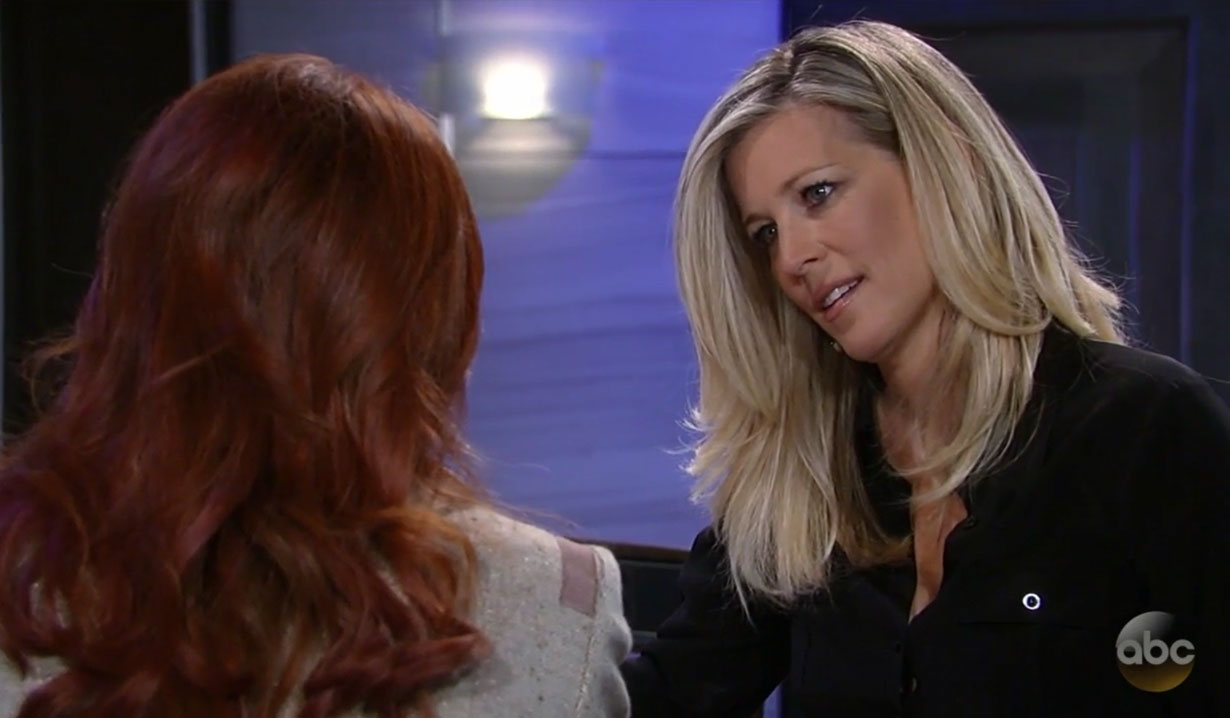 At GH, Alexis notices Finn seems distant. He explains his run-in with Robert Scorpio, who grilled him about Anna. She states that is normal protective behavior for the Scorpios. Finn doesn’t have much experience with family, but she reminds him he has a brother. Finn blows off the topic of Chase and invites her to breakfast at the Metro Court. Alexis agrees to meet him there because she has a consult at the station. Elsewhere, Sonny meets with Stella to discuss Mike. Stella gets frank with Sonny and tells him that he’s going to be faced with hiring a professional to care for Mike or sending him to a home. Sonny refuse to abandon his father, so Stella offers to put together a list of nurses looking for additional work. At Kelly’s, Jordan, Curtis and TJ have breakfast. Jordan departs for work, and Curtis asks TJ for his blessing to marry his mother. TJ happily gives it. Stella walks up and inquires as to what they are celebrating. Curtis tells his aunt that he proposed to Jordan and asks if she can support him. Stella can’t welcome Jordan back into the family she destroyed, and she storms off. At the counter, Ava informs Griffin that Avery is going to be spending a lot more time with her. Griffin hopes she didn’t use Sonny’s father’s condition to get custody. Ava claims she dropped the charges against Mike and Sonny repaid her kindness by agreeing to share custody. Lucy butts in on their conversation and hits Ava up for a Nurses’ Ball donation. Griffin leaves for work. At a table, Michael thanks Nelle for convincing Ava to compromise with his dad. They talk about Ava and how both she and Nelle have had issues with Carly and Sonny. Michael points out that Nelle is nowhere near the level of Ava, who drove her brother to the brink of insanity. Nelle brings up Michael asking Jason to be their child’s guardian and suggests they ask Carly instead. Michael is thrilled and thanks her. At the Metro Court, Bobbie catches Carly taking the medication Kevin prescribed. Carly informs her mom about her session with Kevin, and that the pills are for anxiety. They discuss what has been happening to her. She knows the phone calls and the scarf were real, but she can’t explain the note on her car about Morgan turning into a blank piece of paper. Carly fears she could be losing her mind. In the PCPD interrogation room, Dante and Chase work a case. Dante suggests Chase go home because he appears tired. Jordan arrives and agrees. Chase leaves, and Dante notices Jordan seems distant. Jordan admits she’s been thinking about marriage and tells him about Curtis’ proposal. She’s not sure if she’s ready for marriage again, but Dante advises her that marriage can be worth it as long as you work at it. Jordan calls Curtis and asks him if he’d like to go to the Nurses’ Ball with her, which she recalls was a special occasion for them last year. He accepts. In the station, Alexis runs into Chase as he’s on his way out, and he invites her for a bite to eat at Kelly’s. She suggests they go to the Metro Court instead.

Lucy follows Ava to her gallery, badgering her all the way. Ava offers to write her a check, but that is all she will be doing for the ball. She grabs a pen from Nelle’s bag to write it when her own fails. After handing it over she sees Lucy out.

Back at GH, Sonny meets with Griffin and asks for his dad’s records to be sent to a new doctor because he feels Griffin is on team Ava. Griffin thought Sonny and Ava were getting along and compromising. Sonny laughs and explains how Ava extorted him into agreeing joint custody. Sonny realizes Griffin is starting to see the real Ava, and he decides to keep Mike under his care after all.

Alexis and Chase arrive at the Metro Court and meet Finn. She admits to meddling and wants them to fix whatever is going on between them. Finn has nothing to say to Chase. Chase wonders what Finn’s problem is with him. Finn blurts out, “My problem is not with you.” Back at the bar, Bobbie tells her daughter she’s not crazy, she’s just stressed and exhausted. Carly is still hurt that Sonny is blaming her for endangering Avery, but Bobbie is sure he’ll apologize once he calms down. Sonny walks up and Bobbie excuses herself to return to work. Carly asks Sonny how long he will continue to blame her for what happened with Avery.

Griffin storms into Ava’s gallery and confronts her about her lies.

Finn tells Chase it is none of his business.

Bensch informs Kiki that he’s requested she be on his service again.

Anna tells Robert that she has to stay one step ahead of Jason.

Sam tells Jason that she and Drew are getting a divorce.

Carly confides to Lucy that she feels like she’s losing her mind.