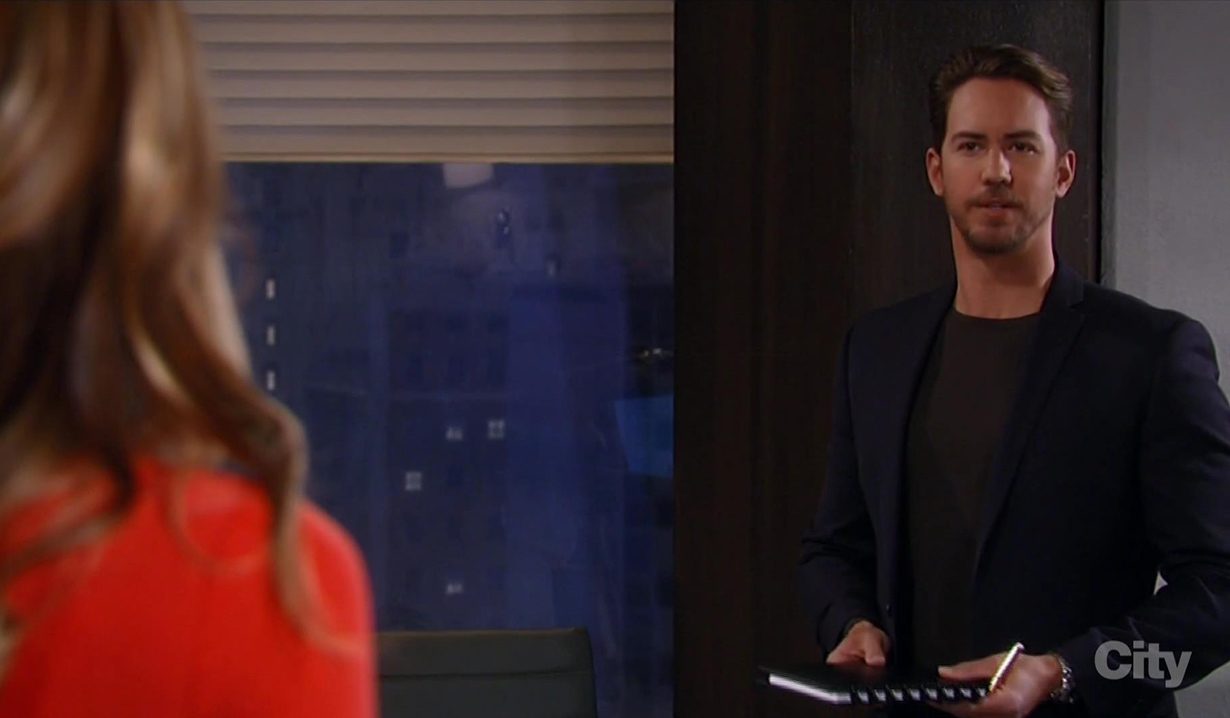 At Maxie’s place, she and Sam share a box of chocolates and Maxie assures her friend she’s hanging in there except for when she runs the risk of seeing Lulu running around playing reporter, which makes her blood boil. Maxie feels lucky for friends like Sam and Peter. Maxie goes on to trash Lulu at length. Though Sam isn’t defending Lulu, she can’t help but wonder if Lulu knows she made a mistake and doesn’t know how to get out of it. Maxie doesn’t want to hear that and so talk turns to Nina being needier than Maxie wants. Maxie shares how Peter has been a great help right now. Sam concedes there’s more to Peter than they knew. Talk turns to Sam and how she needs time to figure out who she is. She doesn’t want to work in fancy clothes behind a desk. She wants to focus on being a PI. She has a confession. She admits she kept the box they packed of Nathan’s belongings that she said she’d send to the needy. She grabs the box from her closet and hands it over to Maxie, who is grateful. They open it and look through it.

In Peter’s office, Lulu and Peter discuss whether Henrik was instrumental in keeping Jason alive. Peter is surprised she hasn’t told Dante that she’s checking into this. Lulu replies that she’s not ready to tell Dante. She knows he’ll hate it. She needs to develop a relationship with Henrik before she tells Dante anything. She asks for Peter’s thoughts on keeping it from her husband. Peter thinks she should trust her instincts. Lulu thinks that no matter how bad Henrik is, it’s not his fault. Faison was horrible. Peter declares that’s what makes her a great reporter – her passion and humanity.

Nina arrives at Wyndemere and sees Valentin with Curtis. Valentin doesn’t get why Curtis is there and Curtis pretends he wants marriage tips. Valentin asks what’s really going on and Nina admits she hired Curtis to dig up dirt on Peter. Valentin’s pissed. They argue as Curtis listens, uncomfortably. Nina wonders why Valentin wants to protect Peter over Maxie. Valentin says what she’s done could be construed as corporate espionage. Nina laughs. Let’s see them run Crimson without her. Valentin urges Curtis to keep the rest of the search quiet.

At Kelly’s, Anna and Robert discuss the box. Anna thinks it was meant for Helena. Faison was always very cruel. Robert looks distant. When Anna questions him he lies that he’s thinking about paperwork. Anna gets an idea and runs off, taking his tablet with him. Frisco calls. Robert uses a crayon to write down Trilithium Alloy…no x-ray. Robert guesses the box wasn’t meant for Helena then.

At Alexis’ place, she tries talking herself out of sex with Finn. He hears her out and when she asks if he wants to do it again, he quickly replies, “Yeah.” Alexis throws him to the sofa and jumps him. They make out for a bit until a timer goes off. Alexis is making a casserole, which baffles Finn. She mentions she’s taking a cooking class as Finn goes to get the door. Anna appears and watches him button his shirt. It’s awkward. Finn goes and Anna asks Alexis to put a codicil in her will for her children. Alexis is taken aback. Anna says it’s for Noah. Alexis asks if she’d rather get a different lawyer but Anna trusts her.

Finn arrives at Kelly’s and runs into Robert, when they both reach for the same cronut. Robert claims he ordered it. Finn recalls his voice fr om a telephone call and the men introduce themselves. Finn lets him know he and Anna are over, which makes Robert think he needs the cronut more than he does. He leaves, running into Anna. She hands over the tablet and Robert tells her that there’s a guy inside she needs to talk to. He goes and Anna heads in to see Finn. She comments that he met her ex. Meanwhile, Maxie finds Lulu sitting outside. Maxie exclaims after noticing her broken leg. Lulu explains she was running after Rocco. Maxie hopes she feels better soon and goes, leaving Lulu looking forlorn.

Nina arrives at Peter’s office to tell him it’s time to go to the big meeting. She quickly texts Curtis that ‘all is clear’ before following Peter. Later, Curtis lets himself in and Sam catches him.

Robert arrives at Wyndemere, much to Valentin’s surprise.

Sam wonders why Curtis is in Peter’s office. 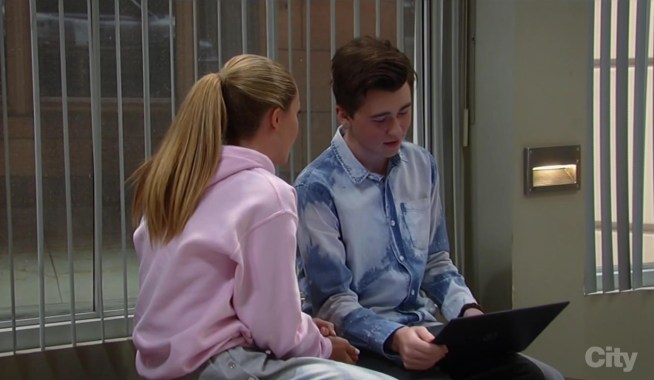 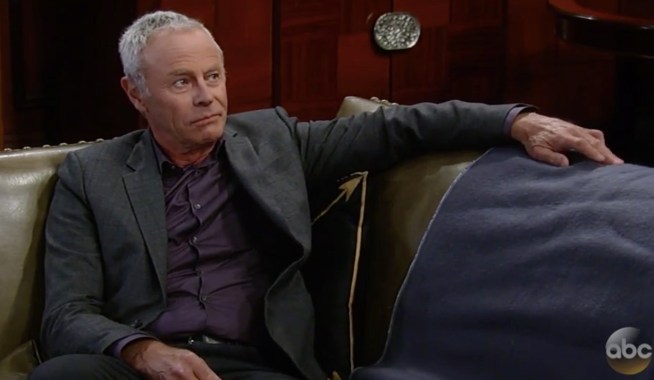