Wednesday April 18, 2018: Bensch lashes out at Kiki, Emma gets a lead, Maxie tries to play peacemaker and Jordan helps Curtis. 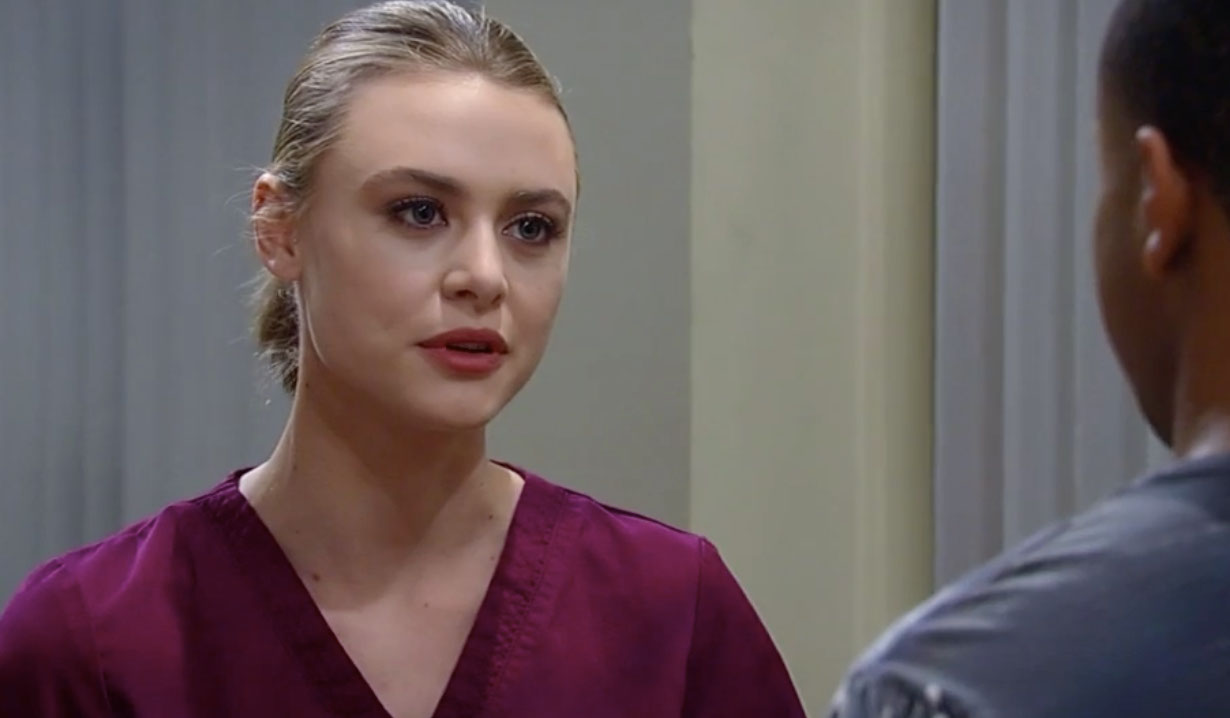 In Switzerland, Robert unexpectedly arrives as Anna and Emma pretend to be scouting out a boarding school. Once alone, Robert and Anna bicker, as, Emma discovers the school’s files are up on the computer so they don’t need to

hack anything. The headmistress returns and they prepare to leave for a tour. Anna pretends to get dizzy and instructs them to go ahead without her. She’ll rest in the office. After they’ve left, Anna checks the laptop and finds a description match, but she can’t find a name. When they return, Emma says she got what she wanted out of the school, so they can leave now. Out in the hallway, Emma tells her grandparents she saw a play program from the time Henrik would have been there. It included the name Henri Francois. She wonders if it could have been Henrik. Anna finds a cast photo on her phone and they wonder which one is Henri.

Liz wakes Franco up in bed when he has a nightmare. He insists he’s fine and they snuggle together. She asks him to open up to her. He shows her the list of the kids Harvey hurt. She wonders if the boys are still haunted and suffering the way Franco is. She asks what he will do with the list. Franco isn’t sure these people want to be found, but Liz thinks he’s avoiding telling his own story. He says he never wanted to put words to what Jim Harvey did to him so how is he supposed to be the voice for his other victims? Elizabeth assures him there is no rush to get through this. Once he heals he can decide what to do with the list. She tells him none of what happened is his fault and he’s free of it. He says he loves her and that one day it will be behind them. Elizabeth is there for him whatever he needs. All he needs is her. They kiss and things turn passionate.

Maxie and Nina meet at Charlie’s. Nina tells her sister-in-law she wants to discuss Peter August, as he walks in. Maxie asked him to be there so the two of them could get to know each other better. Maxie asks them to do it for her and the baby. Peter is game, as Nina snarkily asks to hear some of his stories. Peter gets cagey so Maxie encourages Nina to go first. Nina glibly launches into her wild history and then grills Peter about his past. Nina gets a text and rushes off. Maxie declares that didn’t go the way she expected. Peter appreciates it none the less. He tells her he came there for a job and to his surprise he found a life.

Curtis brings Jordan breakfast as she works on Avery’s case. She coughs and says as a mom she understands how unbearable it is knowing your kid could be in danger. They sit together to eat, as Curtis tells Jordan he’s investigating Peter for Nina. They discuss Peter’s abbreviated paper trail and Curtis asks Jordan to find out if he is in witness protection. Jordan makes a call.

Nina meets Curtis at the PCPD. He tells her he learned Peter wasn’t in witness protection, which means there could be illegitimate reasons for there not being any record of him before the age of 21. He instructs her to keep it to herself and to not doubt Peter. She worries that she already did that.

TJ helps an anxious Kiki put up flyers around the hospital about Avery. Kiki feels helpless and wonders if she should see her mom. TJ points out it is her first day with the shadow program. She notes she’s assigned to Bensch and wishes TJ could take her place. TJ admits he was up for the program but didn’t get it. He wonders if she did anything that put her over the top. She flashes back to Bensch kissing her and admits she thought about turning the program down but she was told it would be unprofessional. He thinks it helped that she worked at the hospital so the doctors already knew her. He’s happy for her, but thinks it’s understandable if she takes the day to help with Avery. Later, Kiki runs into Bensch and asks if she can postpone her first day because of Avery. He says to be effective physicians they can’t let their personal lives get in their way. She tries to protest, but Bensch insists there’s nothing she can do for Avery so she can’t have the day off. She asks if he’s doing this because she rejected him. Incensed, Bensch tells her to show some maturity and to not squander the opportunity.

Kim is where she wants to be.

Oscar wishes he could help Joss.

Avery Remains Missing and Her Case...

Mike and Avery's Whereabouts Is...