Thursday April 12, 2018:  Nelle continues with her plan for Carly, Nina gets intriguing information on Peter, Lulu gets a lead on Henrik, and Sonny enlists Max's help. 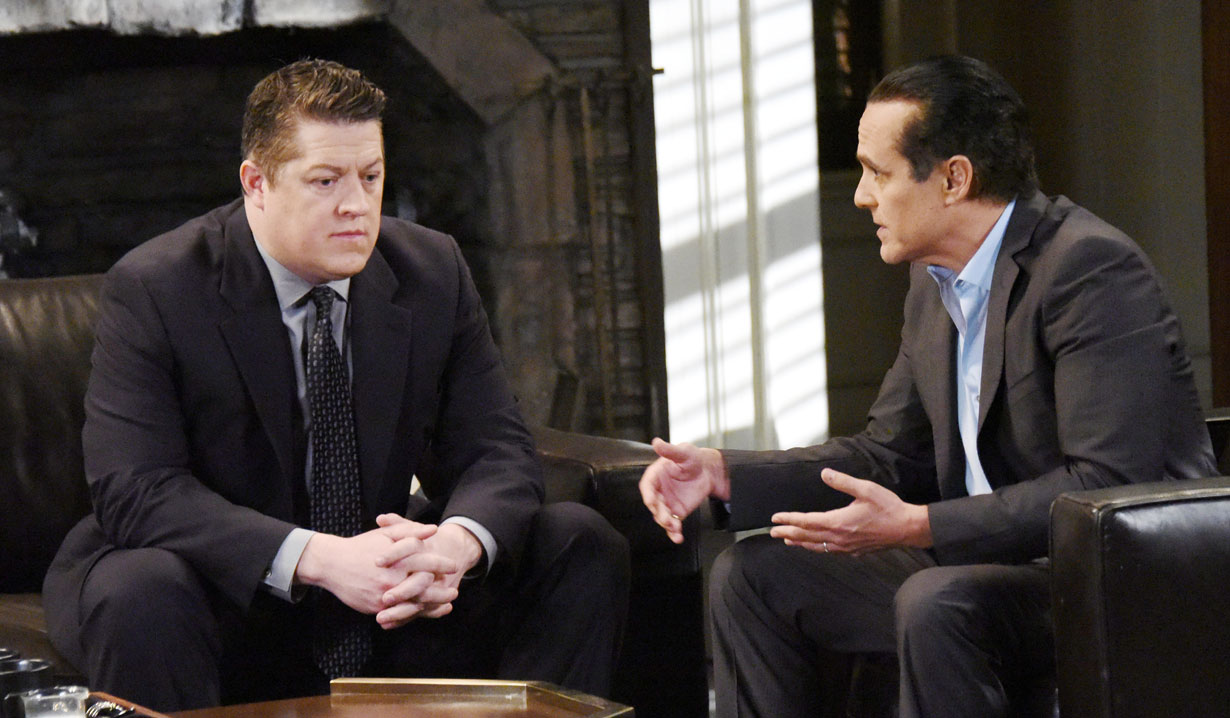 At Ava’s, Griffin wakes up in her bed after having a nightmare that Peter took Maxie hostage. Ava comforts him, and wonders if those test results are what gave him the bad dreams. At Ava’s, Griffin wakes up in her bed after having a nightmare that Peter took Maxie hostage. Ava comforts him, and wonders if those test results are what gave him the bad dreams. He can’t talk about it due to patient confidentiality, but thanks her for caring. He heads into the shower, and Ava takes another peak at the test results. Later, Griffin assures Ava once he destroys the test results that he’ll feel better. Nelle arrives to drop off some contracts for Ava to sign and Griffin leaves for work. Ava once again tries to talk Nelle out of whatever her plan for Carly is, but Nelle won’t hear of it.

Lulu drops by Aurora and informs Peter that she has decided to drop her investigation into Henrik, but he asks her not to. He thinks she’s baited the hook and Henrik may bite. Lulu’s phone dings, and she exclaims, “Speak of the devil, Henrik Faison just contacted me.” However, she’s been getting a lot of messages from crazy Henriks wanting to meet, and doubts it is real. She tosses the phone to Peter, who reads the message and notices a quote from The Severed Branch in it. Lulu becomes excited and wonders if this is the real deal given that the book hasn’t been released. However, she doesn’t want to make the same mistake as she did with Faison, which lead to Nathan’s death. Peter reminds her with Faison dead that the only one who can provide answers is Henrik. She realizes she can’t give up this opportunity. Lulu leaves, and Peter calls Valentin and tells him it is done.

At GH, Maxie waits to meet Nina for the birthing class appointment, while Michael learns Nelle is running late due to running an errand for Nina. Michael bumps into Maxie, and they chitchat for a bit. He gushes about how excited he is for the baby, which upsets Maxie, so she rushes off. Michael chases her down in the hall and apologizes for being insensitive. She doesn’t want him feeling sorry for her but explains that seeing all those happy couples in that room makes her realize what she could have had. Michael encourages her to keep fighting through the grief, and that she will be a great mother. Michael suggests since Nina and Nelle aren’t there they should help each other through class. They head back in. Nina meets Curtis in the park. Curtis reveals all of Peter’s references check out, but the guy has no known previous addresses before Port Charles. They brainstorm and begin to wonder if the employment records were all faked, along with his entire background. Nina is positive that Peter August is too good to be true and is hiding something. Nina leaves, and Curtis decides to look into Peter’s childhood. At the Corinthos house, Carly confirms to Sonny she made an appointment with Griffin to prove she’s not crazy. Carly knows what she saw and heard were real, and she gets after what happened with Sam last summer that he just wants to be sure. Later, Max arrives to talk with Sonny about an issue with Mike. Sonny explains Mike remembered something being buried in a field which he should have not known about. Sonny tells Max that he disposed of a problem for his old boss there, and he buried the it with a gun. The latest developments in forensics could trace things back to him. Max offers to go dig up the problem for him. Sonny appreciates the offer but feels it’s better to focus on what his father knows and who else knows about it. Elsewhere, Carly calls Ava to inform her there has been a change in plans with her scheduled visit to see Avery because she has a doctor’s appointment. Carly offers to bring Avery by to see her later. She leaves for her appointment. Back at Ava’s, Ava fumes to Nelle that Carly has thwarted her day with Avery. Nelle explains this is why she can’t take chances with Carly. Nelle leaves, and Ava looks at a photo on her phone that she took of Griffin’s test results.

In the GH parking garage, Nelle watches as Carly gets in the elevator and goes up to the hospital. She leaves a note on the windshield saying, “Find me.” Nelle heads up to the birthing class and spies on Michael and Maxie practicing their breathing techniques while giggling and having a good time. She quickly bursts in to separate them. Nina arrives and tends to Maxie. Meanwhile, Carly meets with Griffin and they head to his office.

Jason wonders to Anna how they do this and only break one law.

Carly tells Griffin that she thinks something is wrong, but not with her health.

Stella gives Sonny advice about being able to forgive himself.

Mike asks Avery if she’s ready to hit the road.

Robert Teams up With Anna on the...