Tuesday April 3, 2018: Franco has a session with Kevin, Jason searches for Faison's belongings, Griffin has it out with Peter, and Maxie meets Nathan's replacement. 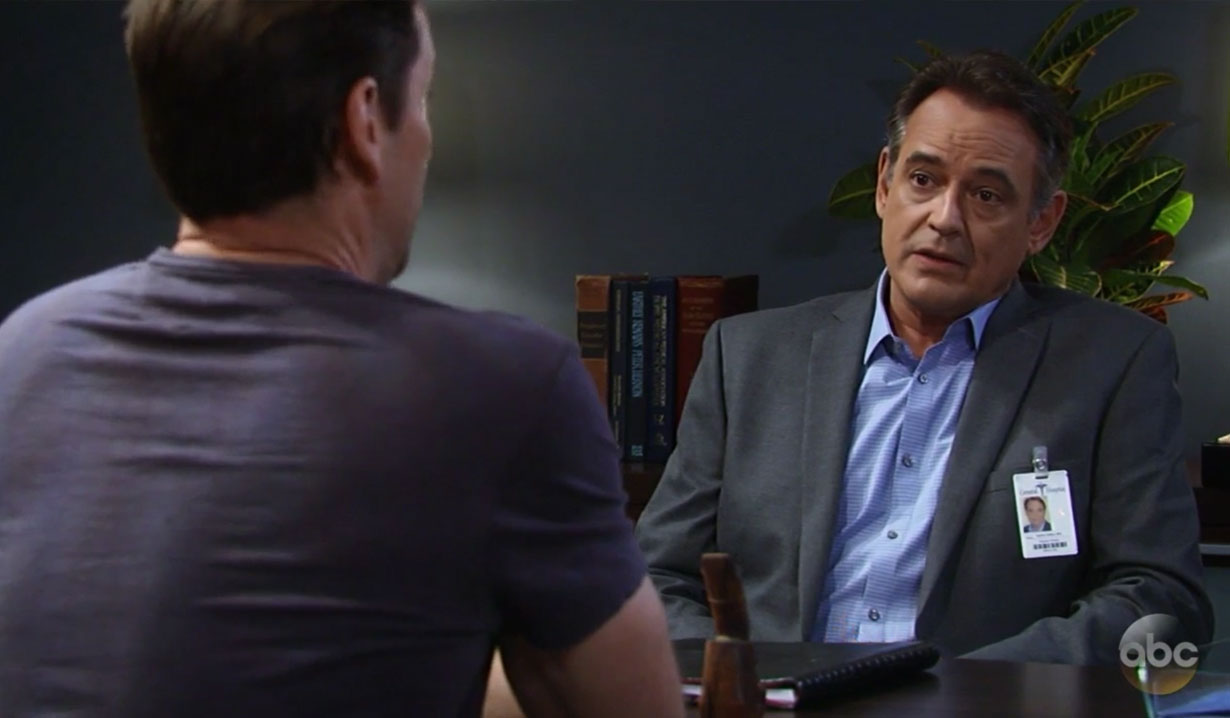 Liz visits Franco at his art therapy studio at GH and learns he hasn’t made a follow-up with Kevin. She feels he’s not willing to do the work he needs to in order to fix things between them. She leaves, and Kevin drops by because Franco hasn’t been to see him lately. They go to his office where Kevin suggests they discuss the panic attack he had with Jim. Franco explains what happened and wonders if his mind is protecting him from something which he can’t remember involving Jim. Kevin suggests hypnotherapy. He admits it could suck and be difficult, even scary. Franco agrees to try it. In the halls, Jason questions Finn as to the whereabouts of Faison’s belongings from the night he died. Finn explains the hospital’s process of taking the belongings off a person when they are brought in on the gurney and bagging them. He suggests Jason check with the nurses on call. Jason thanks him and runs into Liz, who he sees is upset. She assures him that she is fine and inquires as to why he’s there. He is looking for Faison’s personal affects. Liz offers to make some calls to find out where they are. She brings up Franco, who has moved out, which Jason isn’t sorry to hear. Liz finds Jason’s lack of understanding and sympathy frustrating. She states that love is precious and should be treasured when found. He should understand that because Sam loves him. Jason informs Liz that Sam left town to figure out who she is. Liz feels he’s suggesting she do the same, but she knows who she is and who she loves. Liz gets a text and tells Jason that Anna took possession of Faison’s belongings. Maxie arrives at the PCPD for a ceremony honoring Nathan. Ned and Jordan thank her for coming, and Ned escorts her to the ceremony. After the ceremony Maxie returns to the station and sits at Nathan’s old desks when Chase walks up. He wonders why she’s sitting at his desk. She explains it was her husband’s. He apologizes and knows he has some big shoes to fill. Chase introduces himself, and says it is an honor to meet her. She advises him to be kind, generous and trustworthy in order to do right by Nathan’s desk. Nina meets with Curtis at Kelly’s and asks him to investigate Peter August. Curtis quickly searches his digital footprint online and says it is clean. He wonders if she resents Peter because he’s there for Maxie right now when Nathan can’t be. Nina admits that is part of her issue with him, but she wants to make sure he has no skeletons in his closet that will surprise Maxie. She asks him to find out all he can about Peter. At the Metro Court, Anna seeks Andres help to locate Henrik, because trying to match his birthdate against school records is taking longer than she thought. Andre wants her to consider the fact that Henrik could be taking over where his father left off. Anna knows it is a possibility but wants to find him to see if there is any good left in her son. Andre creates a character sketch of Henrik based on what Anna’s found and suggests she look for someone with those qualities. Talk turns to other things, and when Finn shows up, Andre leaves so Anna can talk to him. Finn and Anna make small talk, and Anna admits she talked to Alexis about him. Alexis wanted to make sure she wasn’t stepping on Anna’s toes by dating Finn and she told her that her toes were just fine. Down in Aurora’s offices, Griffin confronts Peter about being Faison’s son. They argue about Peter keeping his identity a secret from all the people he’s hurt by being complicit in Faison’s plans. Peter explains that Jason was at death’s door after his accident, so he couldn’t let him go because Faison would have killed both of them. Peter reinvented himself because being Faison’s son was a death sentence, and he traveled to Port Charles to make sure everyone his father had hurt were doing okay. He chose to work at Aurora and save it because it was Drew’s company. He cries that if his identity is revealed then they will all blame him. He is trying to make things right and begs Griffin to keep his secret because he has friends, responsibilities and a good life now. Maxie arrives to see Peter. Griffin departs, and she asks Peter if everything is okay. He believes so. Maxie tells Peter about attending the ceremony for Nathan and meeting the man who has replaced Nathan, and she managed to get through it, which is progress.

Franco worries to Kevin that he might find out something he doesn’t want to find out.

Jason asks Anna if she’s keeping something from him about the night Faison died.

Nelle refuses to back off Carly.

Carly tells Bobby about the scarf placed in her office.

Sonny yells at Mike, “Your parents are dead!” 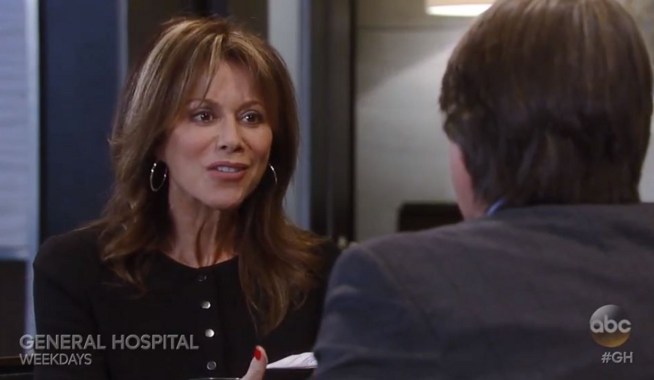 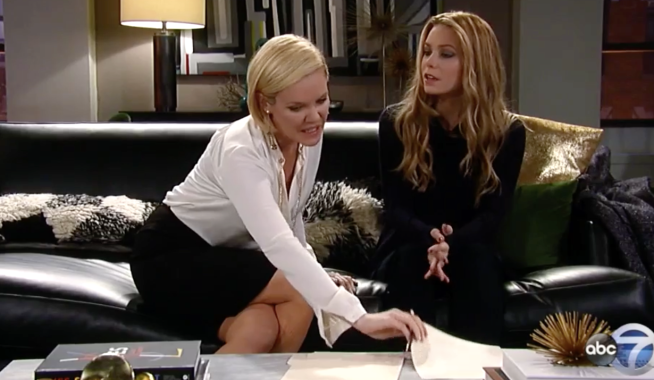