Franco Confesses His Memories of Jim Harvey to Liz 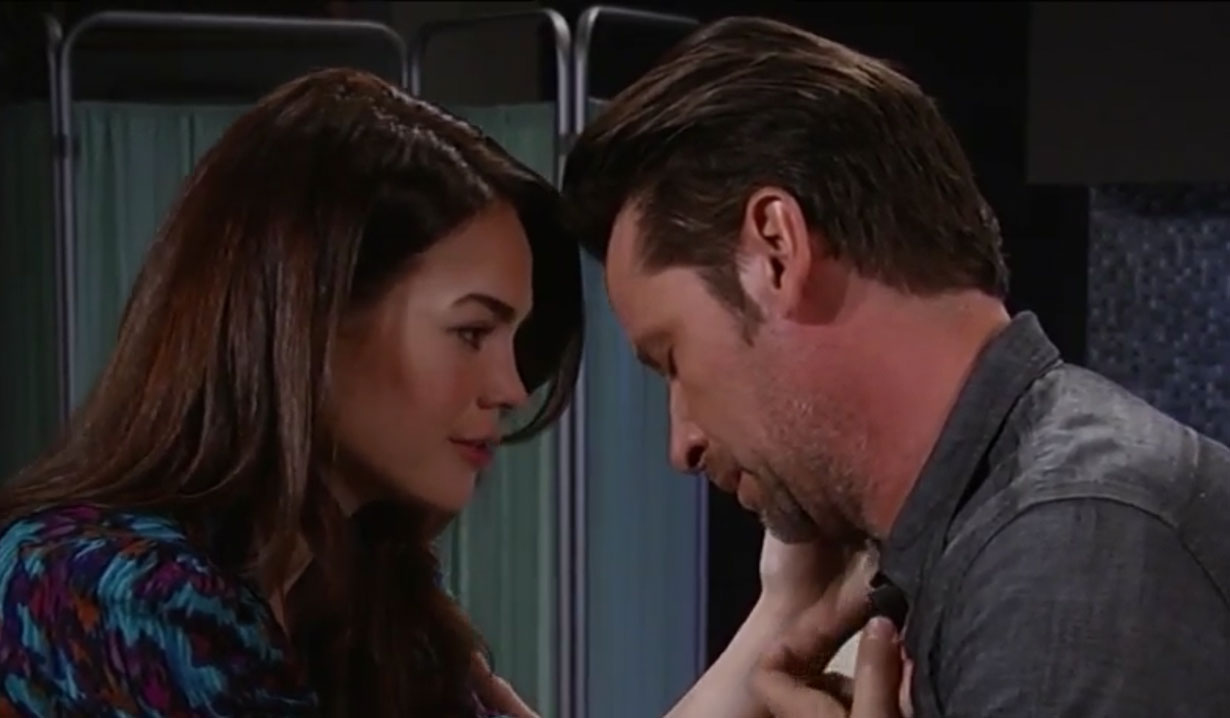 At the Metro Court, Carly talks with Kim about Joss and Oscar and the scare they went through. Talk turns to Drew, and Carly can’t help but notice how Kim speaks of him. Kim reminds her that Drew is married, but Carly is sure it is only a matter of time before Sam is back with Jason and Drew is a free agent.

Kim tells Carly she’s actually getting close to Julian Jerome, which prompts Carly to blurt out, “Hell no!” Kim assures her that she knows Julian isn’t over his ex, so it’s not going anywhere. Kim has to get going and leaves.

At GH, Michael and Nelle chat after one of their birthing classes. Michael has decided to find his own space and is moving out of the mansion. He will be staying at the Metro Court until he finds a place. Nelle fumes because that means she’ll have to see Carly, and she rants that his mom is unhinged when it comes to her. Michael believes she is the only one causing problems and he has to go. Elsewhere, Drew and Franco reunite with Sam and Liz after getting checked out. They learn Harvey is still on the run after holding Betsy hostage. Sam wonders what Harvey is trying to hide. The men say it has to do with something that happened when they were kids. Drew and Franco bring them up to speed on what happened, though leave out some details. The guys are called away to fill out some paperwork. Liz is relieved that Franco never intended to hurt Drew.

Sam still isn’t sure. Liz snaps, “You are the only one who will hurt Drew.” Meanwhile, Franco thanks Drew for not telling Liz about his meltdown. Drew feels he should tell her. The guys get back to the women. Drew and Sam leave, and Franco and Liz step into a room to talk. Liz needs him to come clean with what he’s holding back before they can move forward. Franco opens up about Harvey telling him that he was a liar, and nobody would believe him, and that it brought up a memory from his past and it caused him to breakdown. Liz believes him but asks what he’s really remembering. Franco admits there is more, but he isn’t ready to face it. Liz’s phone goes off, and she sees it’s a message from Jordan. Jordan is bringing Betsy home, and she wants to tell them the truth about Harvey.

Anna and Andre take a run down on the docks. Anna admits all these regrets over Henrik are keeping her from getting a good night’s rest. Andre wonders if Finn is one of her other regrets keeping her up. Andre says she is one of the most fearless people he’s met, but Finn has her running scared. She asks him to stop psycho-analyzing her, but he wants her to be happy.

Julian finds Finn and Alexis lunching at Kelly’s. He tells Finn that he can thank him at any time for dropping the charges. Finn refuses, and thinks Julian is jealous of his friendship with Alexis. Finn walks out, and Julian admits to Alexis that he is jealous of the time she spends with Finn. He asks how serious it is between them. To get him off her back, Alexis says she and Finn are getting serious.

More: Vote for 2017 stories in the Sudzies

Sam and Drew return home, and he admits he feared he may never see her or the kids again. Sam asks how those guys got the jump on him. Drew tells her about Franco’s breakdown, and how it distracted him. Drew believes something happened to Franco as a kid, and Harvey knows what it is and he’s desperate to keep it a secret. Drew is sorry for troubling her by not telling her what he was up to with Franco and apologizes because he seems to have lost his wedding ring. Sam reveals she found it in Harvey’s room, and that’s how she knew where he was. Drew feels everything is right now, but she tells him they need to talk.

Michael goes to see his mom at her office and informs her that he’s moving out of the Quartermaines and getting his life back, one without Nelle. Carly is thrilled and hugs her son as Nelle spies from the door. Carly whisks Michael off to look at rooms, ones with plenty of room for him and the baby. Nelle breaks in and leave the bloody scarf on Carly’s desk.

Back at the docks, Anna reveals to Andre she never thought she could love someone after Duke. Andre feels she is feeling guilty or scared she may lose him like she lost Duke. Finn walks up, so Andre departs.

Anna asks to speak with Finn.

Alexis tells Julian that Finn does it for her.

Carly tells Jason that Sam just needs to admit she belongs with him and then all will be right.

Sam cries to Drew that they need to talk.

Mike fumes to Sonny that he called him a liar, and now wants him to calm down.

A Frightened Betsy's Found by Curtis...

Drew Leaves Sam After She Admits She...

IATSE Grips Local 80 Chief Thom Davis On Restarting Production: “There Is A Deep Understanding Of The Perils If We Don’t Get It Right”