Bensch Gets Too Personal with Kiki, Who Worries about His Intentions 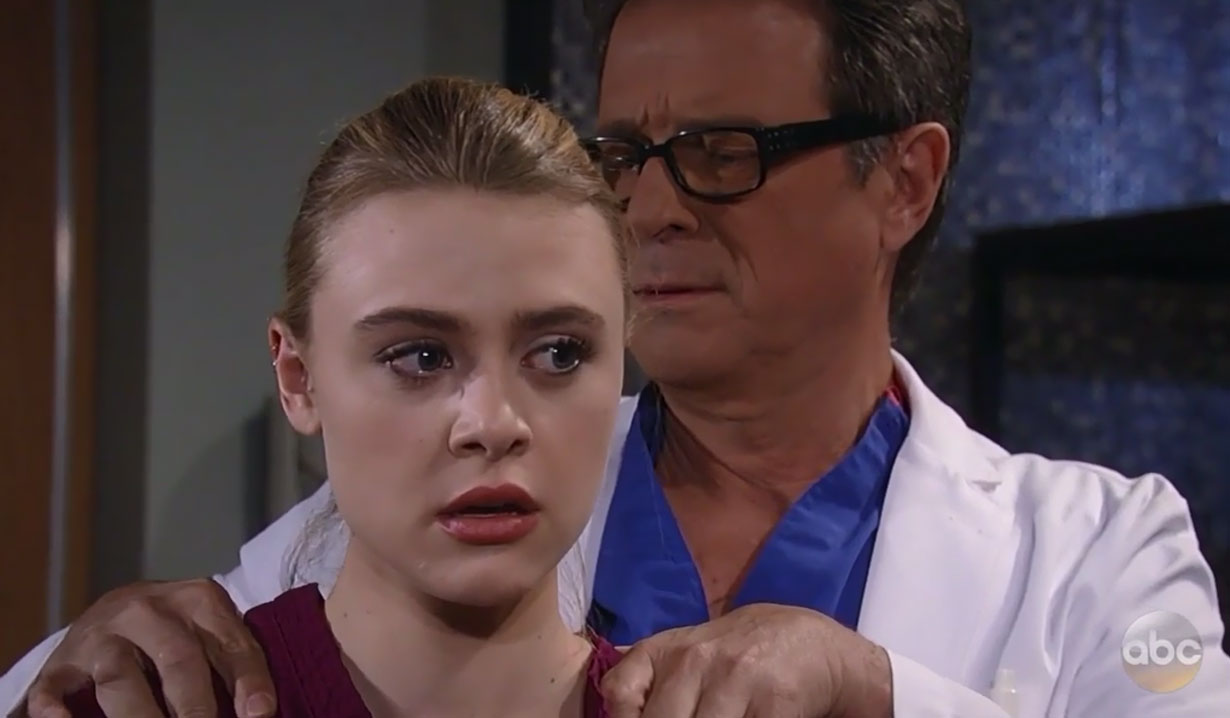 Sonny accompanies Mike for his appointment at GH, which Mike protests. Dante arrives, and Mike reveals he asked Dante to come to the appointment with him. Griffin meets them and takes Mike off for an exam. Sonny feels that Mike doesn’t trust him, but he needs to because he won’t be able to rely on himself much longer. After the exam, Griffin suggests to Dante and Sonny they discuss some options. Dante makes an excuse that he forgot his son had a ballgame and can’t stay. Griffin talks with Sonny and Mike in his office about a medication that may delay the speed of Mike’s memory loss. Mike thinks it will only delay the inevitable, and he doesn’t have insurance. Sonny offers to pay for it, but Mike doesn’t want to be a burden. Sonny lashes out that he’s being a pain in the ass, and if he doesn’t take the medicine he will become a burden. A hurt Mike walks out and fumbles with the vending machine in the hall. Sonny asks Griffin to be honest and asks how long Mike has. Griffin tells him the stats are four to eight years, and Mike is in the second or moderate stage of the illness, which lasts the longest. Griffin suggests he make the most out of the moments he has left with Mike. In the hall, Kiki tries to return the copy of Grey’s Anatomy to Dr. Bensch because it’s too expensive. He refuses it to take it back and suggests she think of it as an investment of what he hopes is a long and fruitful relationship. Bensch asks her to come to his office to talk. Kiki claims she needs to get ready for work, but he knows she doesn’t work for another hour and insists. Once in his office, Bensch tells Kiki he recommended her as a candidate for the hospital’s program to shadow the other doctors. She thanks him, and he notes she seems stressed. He tells her she needs to relax and gives her a back rub. She gets freaked out and asks him to stop. He inquires what is wrong. She states she doesn’t like being touched, but he only wanted her to understand a healthy body leads to a healthy mind. She thanks him for all he’s done for her, but says she has to get to work. He suggests they meet soon to discuss the shadow program.

At the PCPD, Jordan calls to check in with Curtis, who is up in Buffalo and planning to break into Harvey’s home office to find the dirt on him.

Outside of Harvey’s motel room, Sam gives Drew’s wedding ring she found to Liz and asks her to go to the PCPD and have an APB put out on Drew and Franco.

Liz arrives at the PCPD and shows Jordan the ring and informs her that Sam believes Harvey has done something with Drew and Franco. Jordan bags it and asks an officer to put Chase on the case. Later, Chase is brought up to speed on the case by the officer, who explains that Jordan had to leave on personal business. Down in the basement of Harvey’s building, Drew and Franco hear noises from above and wonder what is going on. Up top of the site, Harvey’s goon is on the phone with Harvey who orders him to bury Drew and Franco.

Back at the motel, Sam listens from the balcony as Harvey demand his goon pour the foundation. The hotel manager knocks on the door and orders Harvey to move his SUV out of the handicap spot because he’s had a complaint. When Harvey leaves, Sam breaks into his room and finds the permit to pour the foundation she overheard him discussing. Sam texts Liz to tell her to get back to the hotel. Later, Sam is almost caught in the room, but Liz arrives and delays Harvey in the hall. Sam slips out onto the balcony, makes her way back into the hallway, and signals Liz that she’s in the clear. Harvey returns to his room, and Sam fills Liz in on what she found and overheard about the foundation being poured.

Back in the basement, Franco and Drew notice cement leaking in under the door. Drew realizes if they are able to pour cement, then they may be able to climb up and out. Up in Buffalo, Curtis breaks into Harvey’s home office and hacks into his computer. He finds maps showing the location of the natural gas deposit. Jordan busts in and warns him that Harvey is more dangerous than they initially thought, so he needs to get out of there. She fears Harvey killed Franco and Drew. As they go to leave, they hear a commotion and draw their guns.

Michael goes on a date with Francesca.

Sam and Liz search for a way into the building that Drew and Franco are trapped in.

A Frightened Betsy's Found by Curtis...