Sam and Liz Team Up To Find Drew and Franco

Friday March 16, 2018: Liz and Sam reach a tentative arrangement, Griffin puts the pieces together, Maxie gets the test results and Nelle furthers her plan against Carly. 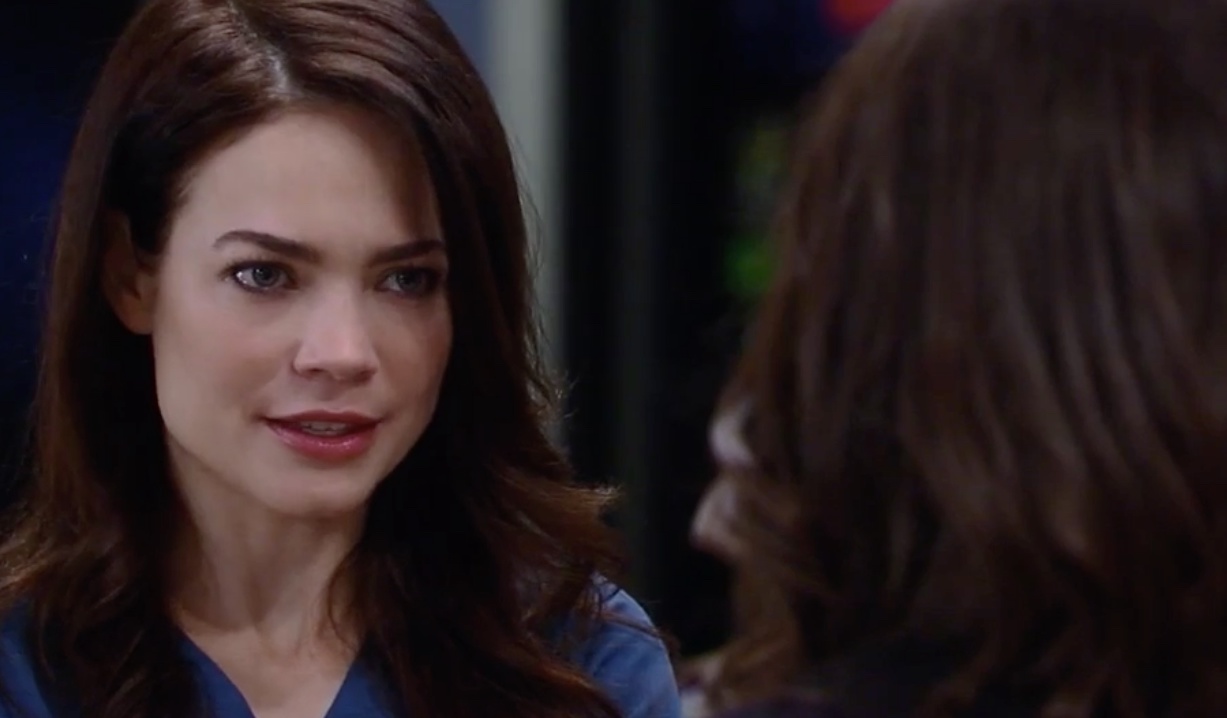 Michael finds his grandfather on Sonny’s deck taking in the fresh air. They talk about Sonny’s rose garden, causing Michael to recall Lila’s garden. Mike remembers her but talks about her as if she’s still alive. Mike has to break to him that both Lila and Edward passed away. Mike tears up as Michael tries to comfort him. Inside, Stella meets with

Sonny and Carly to help prepare them for what’s coming with Mike. Stella suggests they focus on the long term. Sonny brings Mike and Michael into the meeting. Stella tells Mike he should make decisions about his future care now before it’s too late. Sonny shows him a paper giving him and Carly power of attorney. This sets Mike off and he storms out. Sonny joins Mike outside to try and reason with him. Mike admits he’s afraid the day will come when he doesn’t know anything. A teary Sonny tells him when that day comes he’s either alone or he’s not. He urges his father to let them take care of him. Mike relents and embraces his son. Back inside, Stella talks Carly through what’s happening and then excuses herself to get some brochures out of her car. Michael tells Carly he’s there for them if she and Sonny need him. Carly knows he’s busy with Nelle and the baby though. He tells his mother he has a date. Carly thinks Nelle will lose it when she finds out, but Michael is hopeful it will help Nelle see the reality of their situation. After Stella has returned, Mike signs the papers and Sonny walks Stella out. She warns Mike’s condition will take a toll on everyone, warning him it could bring up things he thought were long buried. Sonny insists he’ll be fine. Stella urges him to accept support where it’s given.

Anna meets with Jordan at the PCPD and learns the concerns she expressed to the WSB about Henrik, translated into them pushing the case off on Jordan.

Anna vents to Andre at the Metro Court about how the WSB is handling the Henrik situation. Andre is worried for her and warns Henrik could be dangerous, therefore she could be putting herself and family at risk. Anna wants to presume he’s innocent until she discovers otherwise. She says whoever he is now, she is to blame for putting him on that course and she needs to warn him about the Huntington’s gene.

In his office, Griffin recalls his separate conversations with Peter and Anna. Peter arrives to learn he is free of the Huntington’s disease. Griffin brings up his family members, who are facing the same risks as him. Peter says the only family he is aware of are dead. He abruptly leaves a concerned looking Griffin.

Nina tries to distract Maxie with a pregnancy magazine while they sit in the waiting area at GH, but Maxie is too preoccupied worrying about her baby. Nina tries to reassure her and then points out Liz and Sam arguing across the way about Franco and Drew. The women bicker until Sam admits she’s worried about Drew. She says Franco is her only lead. They fight some more and then Liz says she thinks Franco and Drew are together and goes off to find them. Sam follows. Nina and Maxie meet with the nurse. Maxie then goes off to call her parents, leaving Nina to cry alone. Griffin finds her and she tells him Maxie’s baby doesn’t carry the Huntington’s gene. She talks about the night Nathan was shot and brings up Peter. Griffin wonders why he was there that night. Meanwhile, Peter encounters Maxie, who tells him her baby is in the clear from Huntington’s. When he hears Maxie is with Nina, he suggests she not tell Nina about his presence there. Nina approaches and Maxie makes up an excuse for Peter. Back in his office, Griffin calls Brad for a rush on a paternity test.

Liz and Sam head to the police station to update Jordan on Franco and Drew. Jordan’s ears perk up when they mention Jim Harvey, but she can’t do anything other than have her people keep an eye out for the men. Alone, the women begrudgingly agree to work together.

Ava walks into work and notices a package, which Nelle says is hers. It’s part of her plan against Carly. Nelle fills her in on the earthquake and how Carly didn’t react well to her living at the Qs. Ava suggests Carly might back off if Nelle does. Nelle laughs, but Ava warns her about Carly’s wrath. Nelle won’t rest until Carly is taken care of once and for all. Alone, Nelle messes up a scarf like the one Morgan had. She cuts herself, letting her blood drip on to it.

Jason wonders what Anna’s really up to.

Drew & Franco Wake up in a Basement...