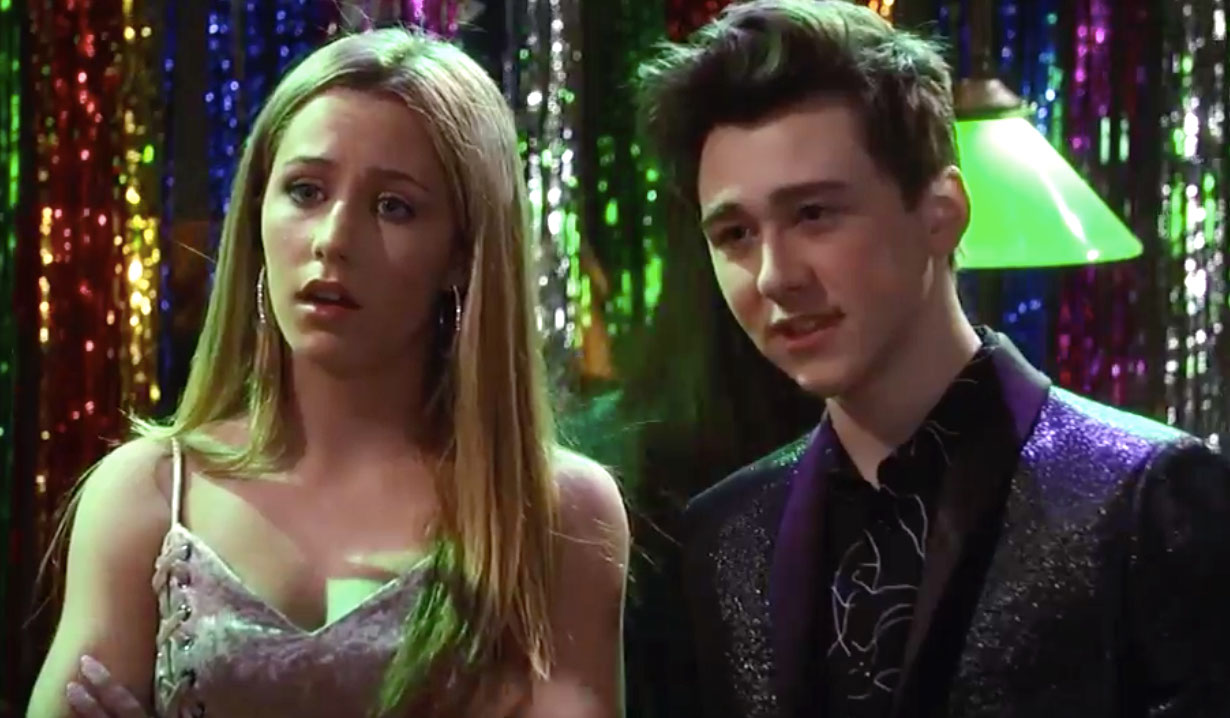 Before the dance, Carly takes photos of an embarrassed Joss and Oscar at the Metro Court. Mama bear pulls Oscar aside to grill him about drinking. Meanwhile, Joss and Jason talk about Michael and Nelle. Jason suggests they let Michael figure things out for himself. The kids’ Uber arrives and they leave, as Carly gushes to Jason about how proud of, yet worried she is for Joss. Jason gives her a pep talk and then leaves. Nina runs up to Carly to say she saw a post of Joss in a dress that’s not supposed to be ready for public consumption yet. Carly tells her Nelle gave it to her and suggests she check Crimson’s closet.

Peter finds Valentin at the Metro Court to confront him about Faison’s brain disease. Valentin insists he had no idea and thinks Peter should get tested. Peter isn’t sure he wants to know if he has the gene. As he fills Valentin in on Faison’s will, Nina approaches and gets upset.

At the Floating Rib, Kim watches Sam and Drew get flirty, while kids mill around them for the dance. Lulu flits around talking to Kim and the teens, including Joss and Oscar, for her story. The kids dance and have a good time until a boy named Troy shows up, yells “Freaks!” and throws a balloon filled with red paint at Joss. He tries to run, but Oscar tackles him. Oscar goes off on him until Drew breaks it up and sends the kid packing. He calms Oscar down and tells him to get back to having a good time. The paint won’t come out of Joss’ dress, but the other kids think it looks kind of cool. Drew brings Sam to the dance floor to get the party back on track, but Sam gets called to pick up the kids at Monica’s. Kim approaches Drew and reminisces about a night they went out dancing. Oscar leads Joss to a walk-in freezer so they can be alone and pulls her into a kiss.

Michael brings Nelle back to the gallery after a class. Worried about Mike, he says they have to choose who will take care of their child should something happen to them. Since Nelle doesn’t have family, Michael has an idea. After Michael has left, Carly drops by to accuse Nelle of stealing Joss’ dress to get to her son. Nelle thinks Carly is going to drive Michael away, right into her arms.

Michael goes to the Q mansion to meet with Jason. He asks him to care for his child should something happen to him and Nelle. Jason would be honored. Sam walks in and Michael leaves. She tells Jason he can say goodnight to Danny before she takes him home.

Jordan visits Curtis in lockup as he does pushups. He urges her to do something about Harvey before it’s too late. Jordan reminds him she needs concrete evidence against Jim, otherwise her hands are tied. They review what they know so far and Jordan says she put in a call to a geologist at PCU to find out what Harvey’s plans mean. She should have answers by this time tomorrow. She starts to leave, but Curtis calls her back for a kiss.

Still at the construction site, Franco implores Jim to tell him what happened when he and Drew were kids. Though unfazed when Franco threatens him, Jim admits he was there when Andy fell down the stairs. Jim tells says Franco pushed Andy down the stairs. He tried to kill him. Franco thinks it must have been an accident, but Jim insists it was intentional. Jim vows not to tell anyone else and advises Franco to keep mum as well. Jim gets under Franco’s skin when he suggests he could hurt Liz and the kids. Jim thinks maybe his tumor enhanced what was innate in him. Perhaps he was just born bad. As they continue their back and forth, Franco says he thinks Jim is lying to him, again.

Elizabeth worries about Franco when Epiphany tells her he’s not at the church yet. Epiphany thinks Franco is sabotaging himself, but Liz trusts him. She knows he will learn to trust himself as well. Scotty drops by and learns Franco is missing. He does some checking, but can’t find him. He offers to keep looking, but Liz says the wedding is off. Epiphany leaves as Scott rambles while trying to explain his son to Liz. He lets it slip Franco was keeping a secret, but covers and leaves. Elizabeth changes out of her wedding dress, plays with her ring and says it’s time to call off the wedding.

An earthquake hits Port Charles, forcing the residents to take cover where they are.

Sonny braces himself as he runs into the mansion.

Franco Confronts Jim About What...

Franco Is Trapped and Curtis Is...

Racism Is The Root Cause Of Health Inequities Between Whites and Blacks, Says L.A. County Director Of Public Health Barbara Ferrer