When Griffin Presses Her, Ava Blurts Out She Loves Him

Friday February 23, 2018: During General Hospital's 14,000th episode, Griffin questions Ava, Mike gets arrested, Carly turns to Dante, Andre's out of prison and Liz and Franco prepare for their wedding. 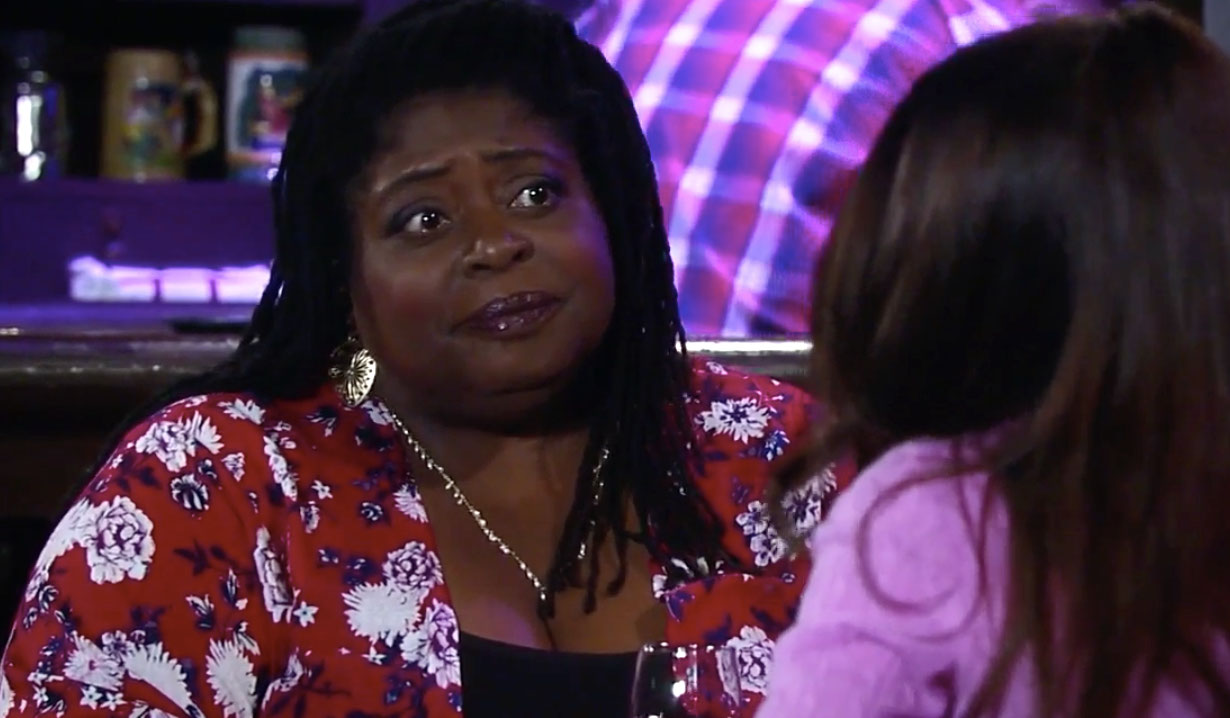 Griffin rushes into the gallery, as Ava shows the new detective Chase footage of the incident with Mike. The detective forwards it to his email and leaves. Griffin takes a look and recognizes Sonny’s father. He calls Sonny to summon him to the gallery. Sonny shows up and gets filled in. He wonders how far gone Mike really is, as Mike calls his son from the police station. Sonny leaves. Griffin stays behind to talk to Ava about Valentine’s Day. Ava admits she’s worried he will finally see her for who she is. He doesn’t buy it and continues to presses her until she blurts out she’s in love with him. She confesses this is the first time she’s been with someone who is good for her and it scares her. So, that’s what she was going to say that night, that she loves him.

Sonny enters the PCPD and finds Mike in the interrogation room. Mike becomes upset wondering how he could forget Luke’s burned down. He breaks down realizing there’s something seriously wrong with him. Sonny tears up as he consoles his father. Mike composes himself, as Sonny talks to Chase about releasing him. The detective tells Sonny he’s been arrested and the report has been filed. He can’t let him go tonight. Elizabeth and Franco get all lovey dovey talking about the wedding outside of Kevin’s office. Epiphany approaches, as Kevin welcomes Franco into his session. Once the men are gone, Epiphany tells Liz they’re going out for drinks since it’s the night before her wedding. Inside Kevin’s office, Franco eventually shares his memory of locking Andy in the trunk. When Kevin can’t give him the answers he’s looking for, Franco gets frustrated and leaves. Kevin gets a call about tests he had fast tracked. Liz and Epiphany go to the Floating Rib, where Liz confesses she’s tired of worrying about what her friends think about her and Franco. Epiphany assures her they all love her and hope she’s right about Franco, but they haven’t forgotten what he was like before the tumor. Liz insists no one needs to protect her from Franco. Epiphany wonders if Jason knows that. After they discuss Stone Cold, Franco arrives. Epiphany wishes Franco luck at the wedding, but threatens him if he hurts Elizabeth.

Bensch finds Kiki studying in a booth at the Floating Rib. He orders her food, sits down and helps her with her homework. Their food arrives and Kiki devours some ribs. She thanks him for his help. She’s receptive when he offers it again for the future. Anna walks up to Alexis and Finn at the nurses’ station. Anna awkwardly offers condolences about the election and walks off. Alexis takes Finn to task for staying silent and orders him to clear things up with Anna. He retorts that he tried with her, but she shot him down. Talk turns to their night together. Alexis says what happened that night can never happen again. She likes him and gets what he’s going through, but she doesn’t want them to compromise each other’s sobriety. Finn agrees, but he’d be sorry if their night messed up their friendship. Alexis never wants to lose their friendship. Hence her resolve to never have sex with him again. They pinky swear on it. Back on the topic of Anna, Finn thinks she wanted to open up to him, but he can’t understand why she wouldn’t.

Anna heads to the Metro Court bar, as Andre approaches. She smiles and says, “What took you so long?” It seems the bureau reinstated the memory mapping program and expunged his record in favor of his cooperation. Andre assumes she helped facilitate that, but she denies it. He’s just glad he’ll be working for the WSB instead of Faison this time. She talks about her baby and he asks if she’s told Finn. Anna explains their history working together and that for them to truly be together he’d have to know about her past. She couldn’t tell him, but she’s mostly worried about what her two daughters would think. Andre leaves, as Kevin joins Anna. He tells her Faison suffered from a degenerative brain disease which he could have passed on to his children.

Carly brings Jason to the PCPD, as she tells Dante about the phone calls she’s been getting. She asks him to trace the number from the call with the explosion. As Jason and Carly wait for Dante, she thanks him for always showing up for her. She wants to do the same for him, starting with Sam. Jason stops her, as Dante enters saying the phone number came from a pay phone. Carly wants to go there.

Carly, Jason and Dante find the payphone off the highway, as someone watches from behind some trees. Dante tells Jason that Morgan was killed in an explosion about two miles from where they are.

Brad tells Julian he won’t be part of his and Lucas’ child’s life.

Joss wonders if Nelle thinks she and Michael will get back together.

Ava asks if Griffin is breaking up with her.

Carly needs to figure out what’s going on.

Nelle and Maxie Clash at Lamaze...

Nelle Continues Driving Carly to the...