Thursday, February 22, 2018: Brad gets news from Alexis, Jason goes to Sam and Peter for help, Nelle and Maxie attend birthing class, and Mike reacts to his diagnosis. 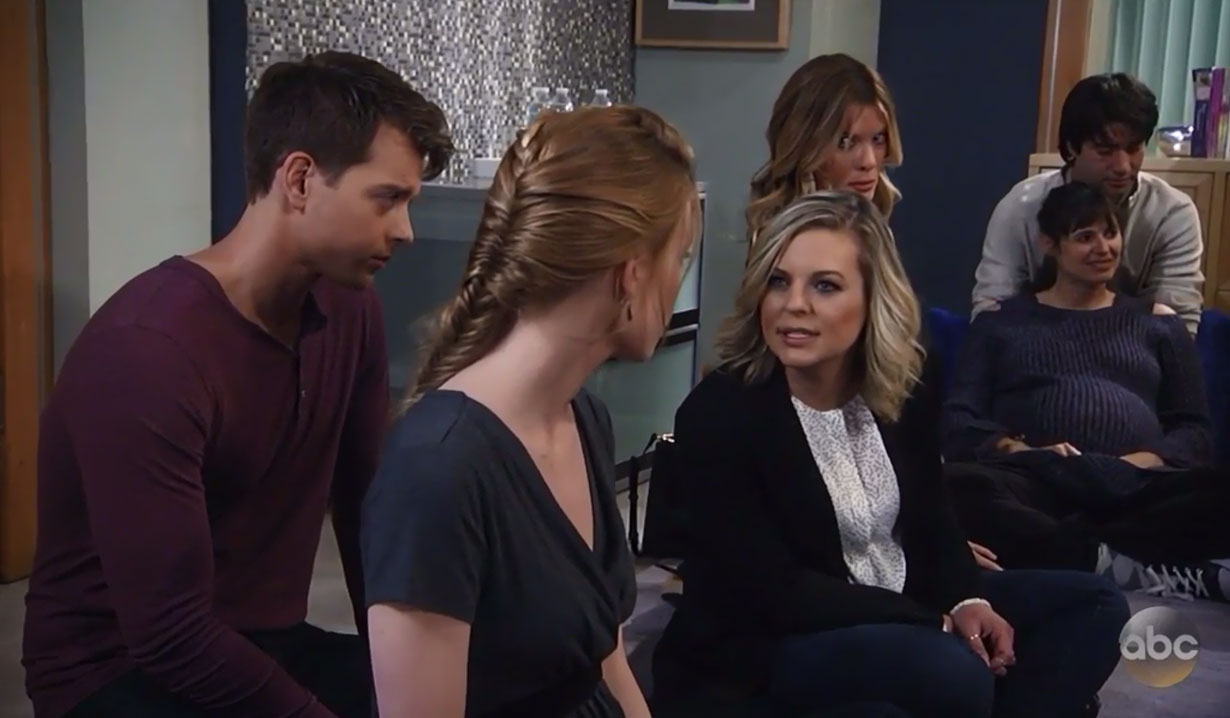 Michael, Sonny and Mike have breakfast at the Metro Court and share stories about Morgan. Nearby, Alexis meets with Brad to discuss his and Lucas’ desire to adopt. Down in Crimson, Carly apologizes to Nina for the mess and explains the police wouldn’t let her in. Maxie arrives and explains they are behind, so she decided to come to work. Carly leaves, and Nina tells Maxie she should be home grieving. Maxie only wants to work to forget this gaping hole in her. She notices where Nina was cleaning the carpet, and Nina covers and explains she dropped her breakfast. As they get to work, Maxie’s phone beeps constantly to remind her of an appointment Nathan made for childbirth classes. Nina offers to go so she doesn’t have to do this alone. Down in the Aurora offices, Jason visits Sam and meets Peter. Jason suggests they run an article on Faison’s will to lure his son out. Peter learns the details and stipulations of the will. Sam thinks publicizing the will may make the guy run. Peter gets a call and excuses himself, and Jason wonders if Sam is hesitant because of Drew. Sam explains finding the flash drive is the goal, but there is a chance they won’t find it, or it could turn up the minute they stop trying to locate it. Peter returns, and Jason tells him that they’re going to scratch the article and he’ll look into things on his own. Jason leaves, and Peter notes that for two people who thought they were the same person, Jason and Drew are nothing alike. Back up in the restaurant, Carly stops by Alexis and Brad’s table and wishes him and Lucas, who is in surgery, luck. Alexis reveals a woman is considering letting Brad and Lucas adopt. She likes the men and wants to remain anonymous, yet keep the adoption open. Carly councils Brad to have reservations about this woman’s motives. She gets back to work, and Brad calls Lucas. Later he tells Alexis they want to move forward with the adoption. Alexis warns Brad this woman wants more information about them and their families. Brad knows that means she’ll find out about Julian. At GH, Mike and Sonny arrive to meet with Griffin and get the results of Mike’s tests. Mike has Alzheimer’s. Mike refuses to believe the diagnosis. He insists this stay confidential and storms out.

At Ava’s gallery, Nelle updates Ava on becoming friends with Monica, and that when she’s done she’ll be by Michael’s side with Carly nowhere to be found. Michael arrives to pick Nelle up for their Lamaze class. Back at GH, Epiphany welcomes Nina and Maxie to class. Nelle walks in with Michael, shocking Nina and Maxie. Epiphany begins, and Maxie and Nelle immediately bicker. Nelle calls Maxie’s coach insane, and Maxie tells Nelle she clearly still hasn’t found someone to love her. Nelle storms out in anger, and Michael follows. He tells her that Maxie is still grieving and promises her that they are a team. Nelle’s phone dings, and she smiles at the reminder that a little project she has set up is off and running. In Griffin’s office, the doctor urges Sonny to get a second opinion, but he is fairly confident in his diagnoses. Griffin gives Sonny information on medications and treatments, and that Mike’s outlook is four to eight years. He tells Sonny they need to find his father and help him accept his diagnosis. Mike arrives at Ava’s Gallery and wonders who Ava is and insists this is Luke’s club. She explains that there is a misunderstanding and Luke’s club is long gone after a fire burned it down. Ava offers to call someone for him. He asks for Luke, but she says he moved away. Mike doesn’t believe her and think she must work for Helena. Mike accidentally breaks a piece of art and runs off. Ava calls the police to report her gallery has been vandalized.

Back at the Metro Court, Carly gets another mysterious call which shocks her. Jason finds her troubled, and she explains the sound of an explosion she just heard over the phone. Back at Aurora, Sam and Peter discuss the differences between Drew and Jason. Jason lives in the here and now, but Drew is still struggling with the how and why. Peter wishes he could help, and Sam says unless he has a disco ball with a flash drive in it, he can’t. Peter flashes to breaking the ball open to get the flash drive.

Anna asks Andre, who is out free, “What took you so long?”

Franco tells Kevin not to blow this for him.

Epiphany warns Liz what if others are right about Franco.

Finn tells Alexis that Anna shot him down when he told her how he felt about her.

Griffin looks at Ava’s security footage and says he knows her vandal.

Carly tells Jason she has to figure out what is going on.

Sonny wonders why someone didn’t warn him.

When Griffin Presses Her, Ava Blurts...