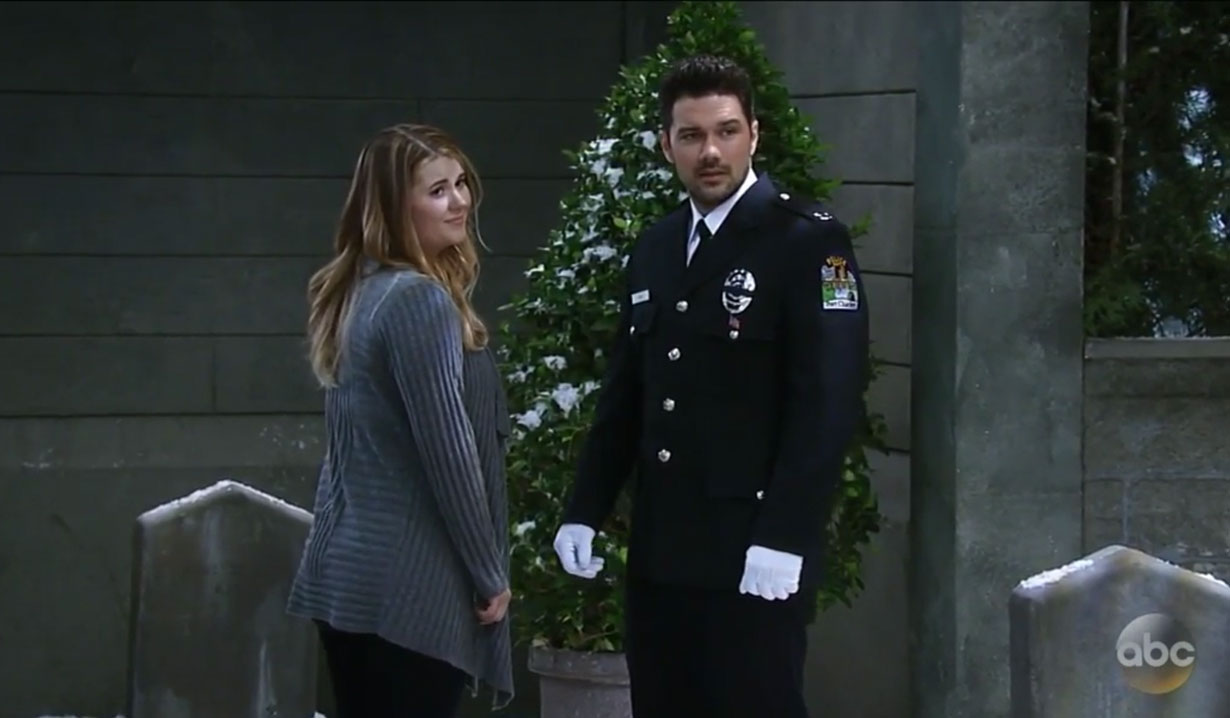 At the PCPD, Dante, Valerie, Jordan and the other officers are in their dress blues to attend Nathan’s funeral. Jordan recounts Nathan’s death in the line of duty and protecting his wife, and salutes his service. His name is added to a plaque of other fallen officers.

At home, Sam, Mac, Felicia and Spinelli surround Maxie. Felicia explains that Frisco can’t get away to be there. Maxie understands and says they shouldn’t keep the others waiting. Spinelli gives Maxie a hug from Georgie, and everyone gives Maxie a moment alone in her apartment before they leave. Maxie looks at the photo of the ultrasound Nathan had on him that is still covered in his blood. She opens her front door hoping to find Nathan there like when they first met him. She doesn’t know how to go on without him. Georgie’s ghost (played by Lindze Letherman), appears and takes her hand. She responds, “Any way you can.” Maxie thinks she was always meant to lose Nathan because he was too good for her. Georgie reminds her that she says that about everyone, and tends to set the bar too high. Nathan will always be with her through their child, and the four years she had with him should be cherished. Her sister informs Maxie it’s time, so Maxie leaves.

Amy and Bobbie set up a reception at The Floating Rib.

Obrecht, Nathan and Valentin enter the church for the service. Bobbie and Amy arrive, along with Curtis, Lulu and others. Lulu and Curtis decide to sit together since Dante and Jordan will be seated with their fellow officers. While Nina insists on greeting those coming in as her last act of respect for her brother, Obrecht thinks about all the years she missed out with her son. Franco and Liz arrive, and Franco embraces Obrecht, who thanks him for coming. Liz relays that she’s sorry for Obrecht’s loss.

At GH, Robin talks with Anna about how it feels just like yesterday she was with Maxie comforting her after Georgie’s death. She has no idea how to tell her once again to keep going on. They meet with Griffin to attend the funeral together. Anna and the others arrive at the church, including Peter who remembers helping Maxie after Nathan was shot. Later the officers arrive and carry Nathan’s casket into the church. Maxie, Mac, Felicia, Obrech and Nina follow. One by one everyone pays their respects to Nathan. Nina speaks about her memories of her brother as a kid, and how Nathan gave everything for others, including his own life. She asks everyone to share a story of Nathan with her and others to keep him alive.

The procession moves to the graveyard. His fellow officers solute him with their rifles, and Dante and Valerie fold the flag on his casket and present it to Maxie. As the drums and bagpipes play Amazing Grace, people place flowers on Nathan’s casket and give their condolences to Maxie. Peter pays his respects not only to Maxie, but to Nina and Valentin. Valentin musters a smirk towards Peter. Franco also pays his respects to Nina. Anna and Obrecht exchange a long silent glance and Anna touches her shoulder. Later, Maxie stands alone with Nathan’s casket. She tells her husband she will always love him. He always saw the best in her and made her want to be a better person. She knows she has to let him go and places the ultrasound photo on his casket. The casket is lowered into the ground, and Peter watches from the shadows as Maxie asks Georgie to take care of Nathan. Nathan’s ghost touches Maxie’s shoulders.

At the Floating Rib, most of the people who attended the funeral gather to pay respects. Spinelli toasts to him, and along with Amy sing Oh Danny Boy. Back at the graveyard, Maxie turns to see Nathan with her sister. Nathan mouths, “I love you,” and Georgie leads him off. Lulu and Dante are in the distance, and Lulu approaches to tell Maxie how sorry she is for her loss. Maxie tells her that she should be sorry because she killed him.

Kim tells Julian, “I’m sure he’d die if I referred to us as a couple.”

Spinelli tells Anna that Henrik’s trail is as cold as Faison.

Peter stands at Nathan’s grave and says, “I’m sorry that your luck ran out.”

Maxie lashes out at Lulu for taking everything from her.