Thursday February 8, 2018: Liz tries to give Franco some insight regarding his latest painting, Nelle has a plan to stop Carly but needs Ava’s help, and Anna is forced to face her past. 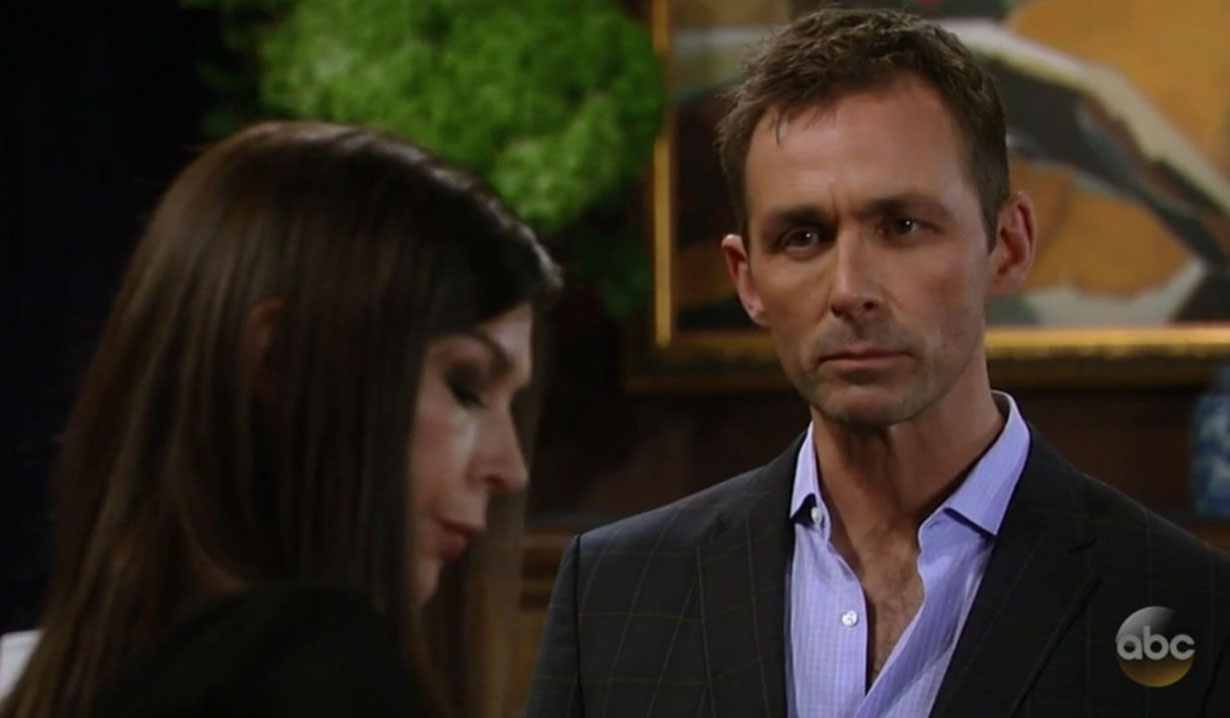 At GH’s nurses’ hub, Kiki and Ava question Liz about her and Franco’s wedding reception. When Ava offers the gallery as a venue, Liz agrees to run it by Franco. Elsewhere, Michael tells Nelle he doesn’t want to name their baby Morgan, it’s too painful. In his studio, Franco looks at his latest painting. Liz appears and thinks his new work suggests he’s coming out of the darkness. She brings up Ava’s offer and Franco agrees to discuss it over food. Michael and Nelle come off the elevator by the hub. Kiki joins them and learns they were there for birthing classes. After Nelle walks off, Michael assures Kiki that Nelle knows there’s no future for them. Nelle joins Ava nearby. She’s ready to put her plan into motion to strike Carly where it hurts but needs Ava’s help. Ava agrees to give Nelle the time off she needs.

In his office at Aurora, Drew slides Peter’s resignation to the edge of his desk and refuses to accept it. Peter claims he accomplished what he came there to do. He recalls Nathan’s death. It made him rethink his life. Drew calls Peter part of the Aurora family. Peter appreciates that. Drew will hold off on the resignation, but Peter doesn’t think he’ll change his mind.

Still at Charlie’s, Sam and Alexis talk about Faison’s death and the lack of leads in Drew and Jason’s past. All they have is Faison’s missing son, Henrik. Alexis brings up Sam and Jason’s New Year’s Eve kiss. Sam blows it off but Alexis suggests she keep her distance. After Drew calls to meet, Sam asks Alexis for a favor. Later, Drew arrives to find Sam alone. As he relays his talk with Peter, Jim Harvey approaches and insists on buying them a drink. Franco and Liz walk in and see Sam and Drew. After Jim briefly says hi to ‘Bobby’ he rejoins Drew and Sam and learns about Franco and Drew’s connection. He admits he dated Betsy and says how ironic that Drew ‘Andy’ and Franco ‘Bobby’ ended up in the same town. Sam appears suspicious about the timing of Jim’s arrival in Port Charles. Franco watches Jim talk to Drew and imagines Jim telling Drew that Franco tried to kill him. Later, Sam and Drew join Franco and Liz. Drew wonders why Franco never told him about Jim then picks up a rabbit’s foot that Franco drops.

Jason looks around his place and thanks Carly for her recent interior decorating. Carly gets emotional over talk of putting bunk beds in the boys’ room and recalls Michael and Morgan sharing them as kids. She’s glad to have her memories and urges Jason to make new ones too. Talk turns to Sam. Jason reminds that he’s giving Sam her distance. Alexis arrives with Danny. Sam sent Danny over for a sleepover. Danny hands Jason a drawing then follows Jason to see his new room. Carly calls Alexis out – Sam didn’t want to bring Danny for fear of being near Jason. Jason and Danny reappear and it’s a sweet moment when Danny calls Jason dad. As Carly leaves, she gets a hang-up call from Nelle.

At Wyndemere, Anna is taken aback by Valentin’s knowledge that she and Faison had a baby. Valentin brings up their time at spy school with she being a beautiful girl and him a crooked man. He recalls a midwife who delivered the girl’s child. At first Valentin thought the girl was Anna’s sister Alex, but says, “It was you… that child was yours.” Anna demands to know how he knows any of this. He wasn’t there! Valentin admits how much he loved Anna, how much she wanted to bring down Faison even back then. He followed her one night, she was dressed as a call girl. He watched her get Faison drunk and leave with him. Valentin knows she got a lot more than she bargained for that night. Anna turns to go, but Valentin taunts, “If you leave now, you’re missing the best part of the story.” Anna remembers how Faison used to pay women to impersonate her. She tried to beat him at his own game. Valentin learned of Anna’s whereabouts during her leave from school. When he traced her to Brussels, there was no sign of the woman who’d given birth. Anna wonders how he knew it was her. He didn’t but she just confirmed it. “No child should have that monster for a father,” Anna seethes. Valentin agrees, that’s why he kept the secret. Anna sobs, “Do you know what happened to that child?” The midwife told Valentin Anna couldn’t look at the baby, for fear she couldn’t let it go and how Anna asked the midwife to find ‘her’ a good home. Anna’s stunned to learn she had a baby girl and is happy to hear the baby had a good home and Faison never knew she existed. Anna thanks Valentin and leaves… Valentin calls Peter and learns he’s leaving Port Charles. “That would be a mistake,” Valentin warns.

Many gather for Nathan West’s funeral. 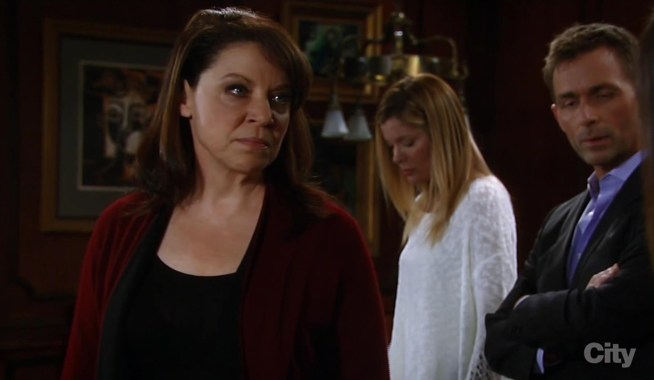 Peter Tells Lulu About His Life As an Abandoned Child 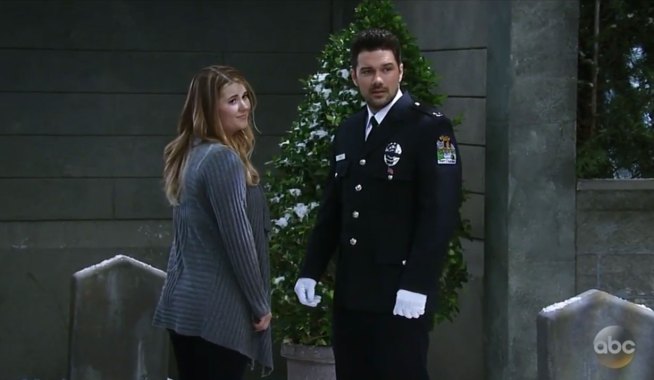