Faison Dies Never Knowing He and Anna Had a Child

Thursday February 1, 2018: Word of Faison's death makes the rounds in Port Charles, Kevin pushes forward with his study, and Sonny and Anna argue about Henrik. 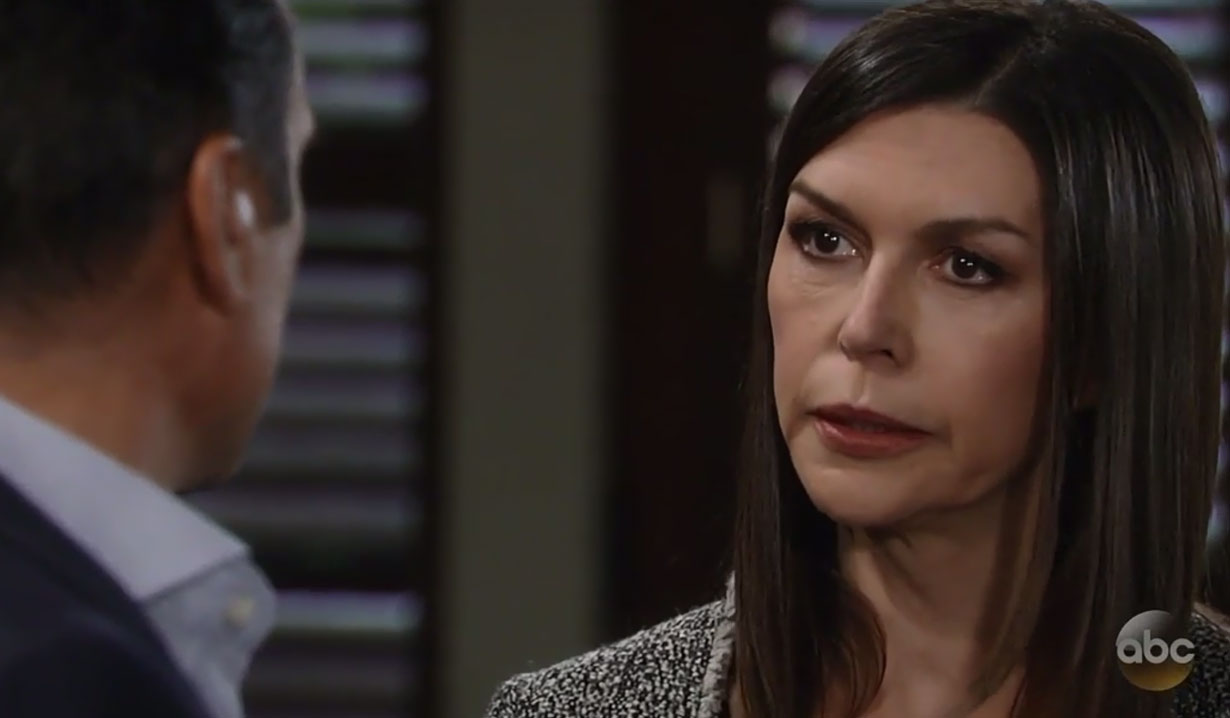 At the Metro Court, Joss and Carly discover the dress they ordered for Joss’ dance was sabotaged compliments of Brenda, who works for the dress company. Later, Carly gets a call with dirt on Nelle. Meanwhile, Monica and Michael have lunch with Nelle. Monica is glad to see them getting along for the sake of their child. She needs to return to work, and Michael excuses himself to check on his mother after her brush with Faison. Carly reveals to Michael that she has discovered that Nelle was institutionalized after Zack’s death, but Michael already knew and tells his mom to drop it. Elsewhere, Nelle approaches Joss and asks how things are with her boyfriend. Joss tells her about her dress drama. Nelle happens to have the exact dress Joss is looking for. She has it sent over and gives it to a grateful Joss.

More: Casting news for all soaps Jason heads to Drew’s office at Aurora and runs into Sam. He tells her Faison is dead. Sam is glad because she hates Faison for taking away their chance at a life together. Talk turns to Nathan. Sam feels for Maxie right now, because she’s been in her place, but Maxie will never get the miracle she got when Jason returned. Scott and Franco meet for lunch at Kelly’s, where Franco asks Scott to give him away at his wedding. Scott thinks he’s joking, and Franco expresses his fears the wedding will fall through due to his past. Franco thinks there is a way to get answers about what happened with Drew, and tells Scott about Kevin’s study. Scott warns him to stay away from Kevin Collins because he’s crazy. Scott changes the topic back to the wedding and agrees to be in it, but only as his best man. At GH, Drew asks Liz to get him in to see Faison, but she tells him Faison died last night. Down in the morgue, Kevin procures Faison’s brain for his study. Back at the nurses’ station, Franco arrives and talks with Liz. He tells her Scott will be in the wedding but warned him to stay away from Kevin. Liz thinks Scott has a personal bias where Kevin is involved, and she thinks Kevin can help Franco. Franco goes to see Kevin in his office to talk about the study. Franco is eager to get started and reveals his first attempted murder was when he was three.

At Sonny’s place, he meets with Anna, who relays the news that Faison is dead. Sonny feels something else has brought her there. She wants to know Sonny’s plans for Henrik. Sonny thinks Henrik purposely kept Jason alive and away from his family to use him, but Anna points out they owe him for not killing Jason as Faison ordered. Sonny asks why she’s defending Henrik. Anna only wants to debrief him without Sonny and Jason’s involvement, so she orders him to stay out of it. Sonny realizes this is personal to her, and that she’s hiding something. She claims Faison terrorized her for her whole life, so she feels for Henrik and wants to offer him a path to a normal life. Sonny disagrees and won’t let Henrik go after Jason again. She warns him not to harm Henrik or make an enemy of her. After Anna leaves, Sonny gets a call from someone from his old neighborhood about his father.

Drew returns to Aurora and finds Jason and Sam talking. Jason explains he came to give him the news that Faison is dead, and what Faison told him about the switch and Henrik. Drew asks Jason how long he has known about Henrik, and why didn’t he tell them sooner. Back down in the Metro Court, Carly learns Nelle got Joss her dress. Joss takes the dress to her mom’s office for safe keeping, and Carly accuses Nelle of using Joss and Monica to get back into Michael’s good graces. Carly tells her it won’t work, but Nelle gloats it already has. Nelle is positive this baby will bring her and Michael back together. Carly calls her delusional, but then again she did spend a year in a mental institution, and wonders if Nelle is still crazy.

Anna goes to the morgue at GH to see Faison’s body. She tells him that she beat him, and he died never knowing her secret. She grabs a scalpel and cuts off a lock of his hair and pockets it. She tells him that there is a child out there, their child. Faison sits up, grabs Anna, and asks if it is Henrik. She screams, and the mortician bursts in. It was all in her head.

Maxie wakes up to find Nathan in her bed.

Nina cries that Nathan is gone.

Ava warns Nelle that Carly will use whatever she can against her.

Nathan's Loved Ones Grapple With His...

After Commiserating with Ava, Nelle...