Nathan’s Loved Ones Grapple With His Death 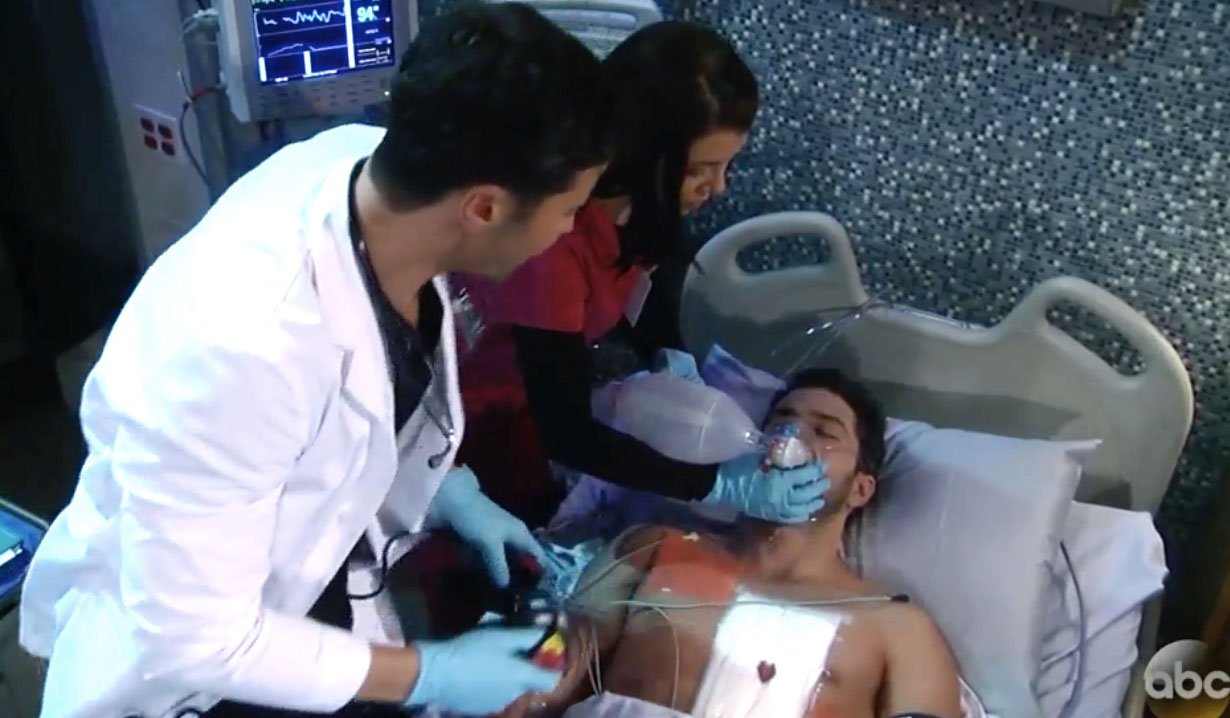 Amy and Griffin rush into Nathan’s hospital room when he flatlines. Maxie is ushered to the hallway where Valentin, Nina, Mac, Felicia, Liesl and Dante encircle her. Maxie quietly pleads for Nathan to pull through. Griffin is unable to revive him and calls time of death on Nathan West. Griffin walks out to gently tell Maxie Nathan is gone. She sobs, but won’t let her parents console her. She returns to her husband’s side alone. Maxie wonders how to say goodbye to the man who helped her recognize she had the strength to save herself. She can’t find that strength right now. It doesn’t work without him. Nothing will. Maxie tells Nathan how much she loves him. She will always love him. She touches her belly and says, “We both will.” Felicia enters to help Maxie get up and walk out the door. Amy returns and pulls the sheet over Nathan’s hands. She thanks him for everything he did for her. Dante interrupts, offering to finish covering the body. She leaves Dante to tell his partner he was the best friend he ever had. Holding back tears, Dante promises he will take care of Maxie and the baby before pulling the sheet over Nathan’s face. Back outside, Nina breaks down, but asks Valentin to check on Charlotte. She needs her to know she won’t be there to tuck her in tonight, but she will be there in the morning. Valentin kisses Nina’s forehead and leaves to call his daughter. Nina walks over to thank Maxie for loving Nathan and then rushes away sobbing. Before leaving with Mac and Felicia, Maxie returns to Nathan’s room, which is now empty. She cries as she remembers Nathan feeling the baby kick. In her office, Jordan looks over Faison’s file and crumples his photo. Stella barges in to complain about her landlord, but Jordan can’t do anything until she gets evidence of criminal activity. Stella’s rant is interrupted by Dante calling to tell Jordan Nathan passed away. She hangs up and tells Stella one of her detectives was killed in the line of duty. Stella watches as Jordan tells other members of the force. Curtis sits with Lulu at Kelly’s as she takes a break from writing her article about Nathan. Lulu mentions she hasn’t heard anything about the detective yet. Curtis says he is there to pick up food for Jordan because he knows it’s going to be a long night. Lulu gets a call from Dante who tells her to get to the hospital. Lulu demands to know what’s going on, so Dante tearfully tells her Nathan didn’t make it. Curtis offers to drive a devastated Lulu to GH.

After Dante hangs up with Lulu from outside Nathan’s hospital room, Liesl blames his wife for putting the events of Nathan’s death in motion. Dante sticks up for Lulu and says everyone is grieving. Liesl points out he didn’t exactly disagree with her. Lulu arrives and cries in Dante’s arms, as Jordan finds Curtis and does the same. Later, Liesl reminisces about her son.

Mac and Felicia bring Maxie home, where Maxie remembers Christmas with Nathan. Amy stops by with Nathan’s belongings. Maxie sadly goes through them, with her parents by her side. Outside Faison’s room, Peter warns Sam and Drew they won’t be able to trust a word the bastard says. The Cains are patted down by a guard before they approach Faison, who taunts Drew about marrying Jason’s woman. Drew just wants to know where Andre’s flash drive is. Faison insists he doesn’t know anything about it. Drew questions him about Henrich. Faison says he will exchange Henrich’s identity for help escaping. Drew and Sam say no dice, threats are exchanged and the couple leaves. Nina runs up demanding to see Faison. She rushes to his door, but Valentin grabs her as she yells out and crumples to the floor. Valentin settles Nina down. He assures her Charlotte is fine before holding her as she continues to break down. Across the way, Sam worries about Maxie to Drew. Meanwhile, Peter returns to Faison’s room. Faison asks about the flash drive, but Peter says, “Our days together are over. Dad.” They exchange threats and insults before Peter tells his father he killed the wrong son. Peter is gleeful that he outmaneuvered his father. He further gloats over holding all the cards including the flash drive containing Drew’s memories. Faison has trouble breathing and grabs for the emergency button, while begging his son for help. Peter whips the button out of Faison’s hand and says, “You taught me better than that.” Peter saunters out of the room, leaving Faison gasping for air.

Carly found out something about Nelle.

Scott tells Franco he has nothing on Kevin Collins.

Faison Dies Never Knowing He and...