Monday January 29, 2018: Nathan is rushed into surgery, Liesl and Lulu get out safely, and Peter faces questions from the cops. 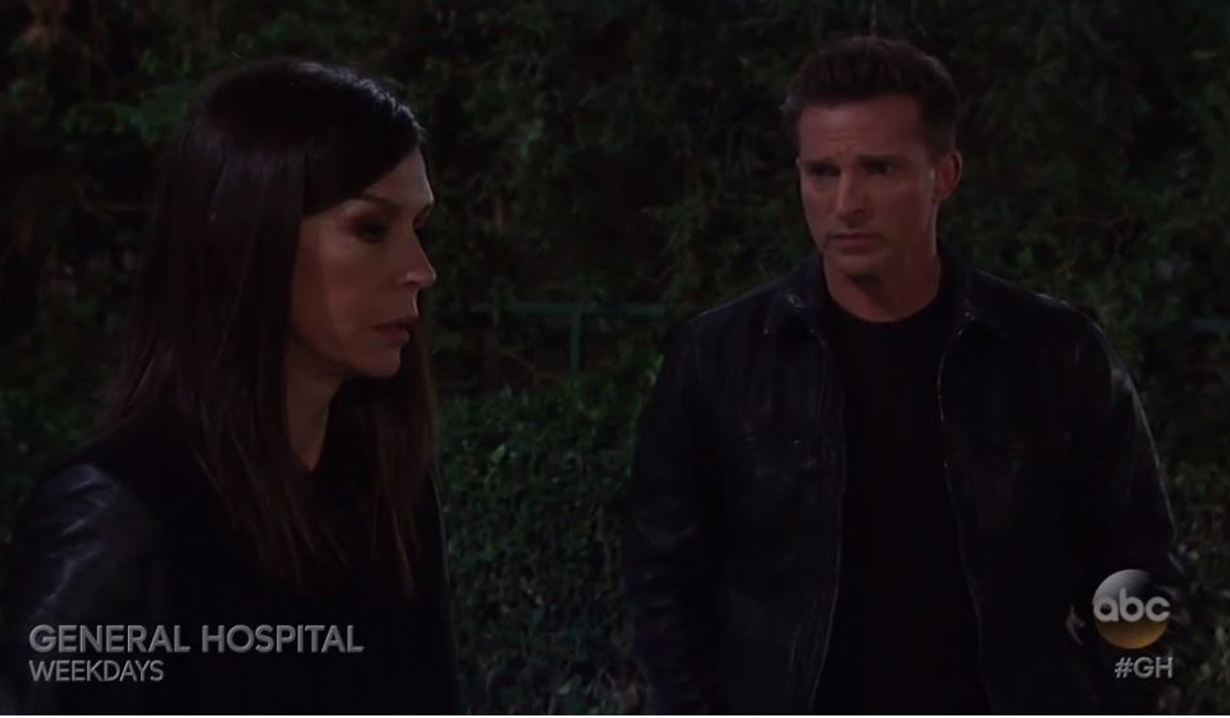 Outside of the Metro Court, Jason tells Carly that Faison has to be stopped, even if that means he doesn’t get any answers about what happened to him. He’s sure someone else must know the truth anyway.

Anna is in the park waiting for Henrik. Peter looms behind a bush. She calls out to him until Jason pops up. He tells her that he shot Faison and he’s in surgery. She wishes he’d killed him. Anna has always dreamt of killing him but has stopped herself to be a good example to Robin. Stone Cold assures her that Faison is done this time. She’s going to pretend she didn’t hear that.

Peter heads into the Metro Court. Before he can get on the elevator, Carly tells him that the place has been shut down. She thanks him for his help earlier. At the hospital, Griffin tells Maxie that they need to prep Nathan for surgery. Bobbie tries to keep her calm. Down the hall, Griffin and Amy try to keep Nathan alive. They get his heart working and Griffin goes out to tell Maxie they will operate when he stabilizes. Finn takes Faison past them for surgery. Maxie is angry he’s going into surgery first. Jordan shows up to explain that Jason is the one who shot Faison. Maxie doesn’t know why he didn’t finish the job. Nathan is stabilized and rushed passed. Maxie begs him to hang in for her and the baby and asks Griffin to promise to do all he can. She tells Jordan what happened with Peter and Faison. The cop calls August for a meeting. Meanwhile, Anna and Jason arrive and get an update on Faison from Finn. The doctor was worried about Anna and assumed she might have had something to do with the shooting. When he leaves to consult with a surgeon, she sneaks into Faison’s room. He’s awake. She questions him about his son and he says the fault lies with the Cassadines. He starts to fade. Finn interrupts and leads her out. He explains how frail Faison is and tells her that she better bring a witness next time she questions him so no one can say she killed him. Meanwhile, Jason sits down with Maxie and promises her that Faison has been stopped. He heads down the hall and finds Faison alone.

Sonny and Dante go to the Cassadine stables. They can smell gas and find an empty cannister in the room. Nina and Valentin start a fire inside Wyndemere. Dante and Sonny start banging on the door, looking for Lulu. The cop explains that his wife has been looking for Faison. Liesl and Lulu come out of the tunnels and explain what happened. She starts accusing Valentin and Nina of being in cahoots with Faison.

More: Parry Shen back as Brad

Peter meets Jordan at the PCPD. Dante calls her and they update each other. She gets back to questioning Peter, but his memories are spotty. He claims he was trying to help Maxie because he thought that Faison would take her. Dante and Lulu storm in and the cop throws the blame for this situation at Peter. Lulu insists this is all her fault. Peter exits and Jordan asks one of her cops to look for the bullet that missed Mr. August.

Sonny arrives at the Metro Court and Carly fills him in about what happened. He doesn’t understand why Faison went to Crimson. They assume it must have been because of Maxie but grabbing her would be risky. There must have been something else in the office he wanted.

Liesl, Nina and Valentin arrive at the hospital. Liesl is panicked and Bobbie leads her away to get an update. Nina stares at the blood on Maxie’s jacket. Maxie assures her that Nathan will be fine. Moments later, an orderly asks Maxie if her husband is an organ donor. That upsets her. Bobbie intervenes and offers to call her parents. Eventually, Griffin comes out from surgery and Maxie rushes over for answers.

Peter goes into an alley and picks a bulletproof vest from the trash. He plucks a bullet out of it and then burns the vest.

Peter tries to be careful.

Dante gets some relief.

Two People Are Rushed Into Surgery...

Posted 47 seconds ago
Back to Top
ad