Two People Are Rushed Into Surgery After the Standoff With Faison

Friday January 26, 2018: Lucas makes an announcement, multiple shots are fired, Peter lurks in the bushes, Lulu looks for a way out and Jason saves Carly. 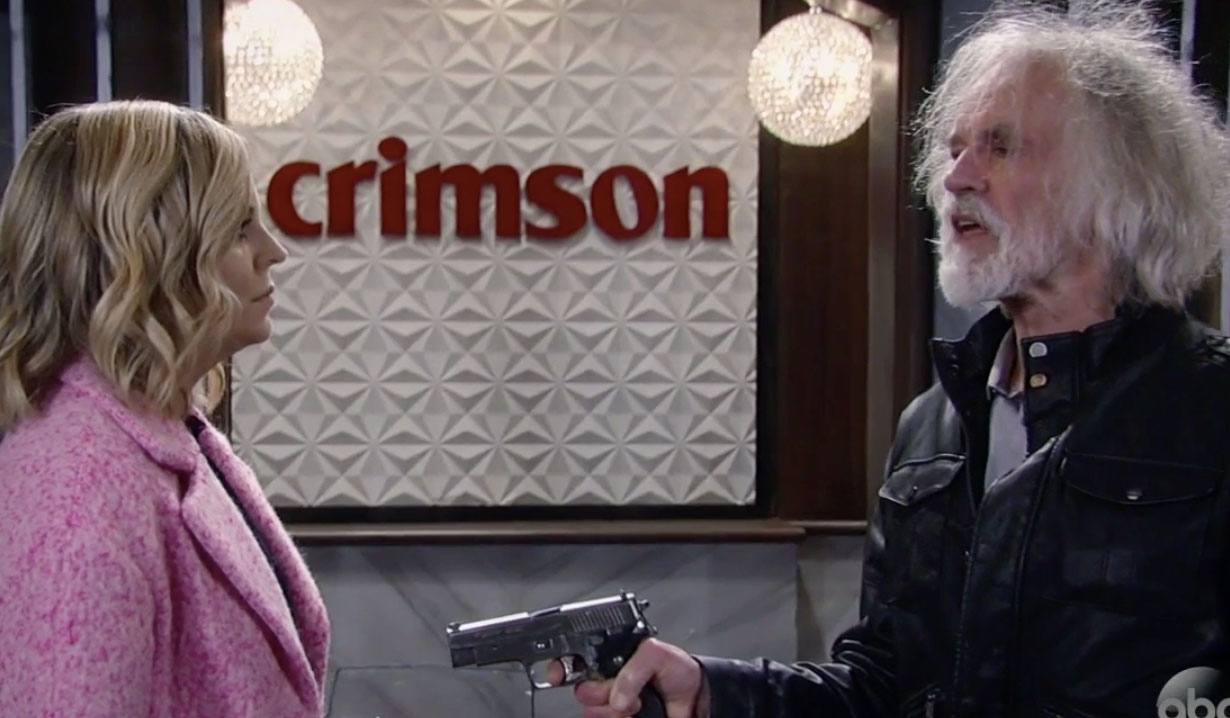 Anna tends to a cranky Finn’s wounds in an exam room at the hospital. They rehash the events with Faison, as Dante and Jordan enter. Jordan says they have an APB out on Faison and could use Anna’s expertise. Anna will catch up with her later. The cops leave, as Anna and Finn engage in more banter. They longingly look at each other before Anna must go. Finn transitions into doctor mode and runs into Alexis at the nurse’s station. They discuss AA, work and relationships. Alexis gets Finn to admit that he wants to go all in with Anna. He fills Alexis in on what happened with Faison and how impressed he was with Anna’s valor. Alexis asks what happens next. Finn doesn’t know, but he didn’t like thinking of a future without Anna. Alexis empathizes but warns him to keep his eyes open. Carly meets with Bobbie and Lucas at the Metro Court. Lucas nervously fidgets as he tells his family he and Brad are adopting. Bobbie and Carly squeal with excitement and hug him. He asks them to write letters of recommendation for them. They would be honored. Bobbie tells him she is proud of him and Tony would be too. Nathan rushes into GH and finds Amy. He asks if Maxie has been admitted. She hasn’t, but Amy thought Maxie was heading to Crimson. Nathan rushes out.

In the Crimson office, Faison holds a gun on Maxie and Peter. Maxie taunts Faison that Jason will show up and kill him. Faison orders Peter to drag the cop, who Faison knocked out, out of the way. As Maxie and Faison heatedly discuss her baby, Peter slyly grabs the cop’s gun and points it at the super villain. Faison sees Peter’s reflection in the computer screen and shoots at him. Peter goes down.

Back in the Metro Court lobby, Bobbie and Lucas leave for work as Carly learns of a disturbance on the third floor. Nathan arrives and learns of the commotion at Crimson. Nathan calls for back up and takes the elevator upstairs. Lucas returns and learns there’s been shooting. Despite Carly’s protests, he rushes upstairs to see if he can help. Sonny and Jason wait for Henrik in a park. They wonder if Anna will show up. Sonny heads to his car as Jason waits outside for Henrik. They communicate over earpieces. Anna jumps in Sonny’s car and they argue about how to handle the meeting. Sonny gets a call from Carly who needs him at the Metro Court. Jason hears over the earpiece. Anna gets out of the car so Sonny can get to Carly. As she waits for Henrik, Anna recalls memories of her past with Faison. She gets a call from Finn. She declines it saying, “The further you are from this the better.”

Dante meets Sonny outside the Metro Court. He backs up his fellow officers who won’t let Sonny in. Jordan shows up and threatens to arrest Sonny if he continues to obstruct justice. Faison drags a defiant Maxie to the Crimson lobby as Nathan walks off the elevator. Guns are drawn and shots ring out. Maxie looks stunned and then screams out as Nathan bleeds from his chest and falls to the ground. She rushes to him, but Faison grabs her. Peter stumbles out of the office with his gun aimed at Faison, who runs off. Peter calls 911. He helps Maxie put pressure on Nathan’s wound, as Maxie begs her husband to stay with her. Lucas arrives and tends to Nathan.

Downstairs, Carly shoos her staff out of the lobby and then feels Faison shove a gun in her back. Jason shows up and shoots him. Faison crumples to the floor. Dante and the cops arrive on the scene and determine he’s still alive. Peter comes downstairs and tells everyone about Nathan. As Faison is wheeled out by paramedics, he makes a cryptic comment about Lulu which sends Dante into a tizzy. Peter says he heard her say something about Wyndemere. Sonny and Dante run out as Carly asks Jason if he’ll be okay if Faison dies and he doesn’t get his answers. Jason knows Faison’s reign of terror has to stop. Upstairs, Nathan is treated by paramedics, who take him to the hospital.

Peter watches Anna in the park from behind bushes.

Faison and Nathan are wheeled into GH. Finn operates on Faison, as Lucas and Amy work on Nathan. Meanwhile, Bobbie consoles an emotional Maxie who says Nathan saved her.

A weak Lulu pounds on the door on Spoon Island hoping someone will hear her. Obrecht passes out from the gas, as Lulu searches for a way out. She finds a sign Spencer made and then something else catches her eye. Dante and Sonny show up and smell gas. Dante kicks in the door.

Jason thinks there’s someone else that can help if Faison dies.