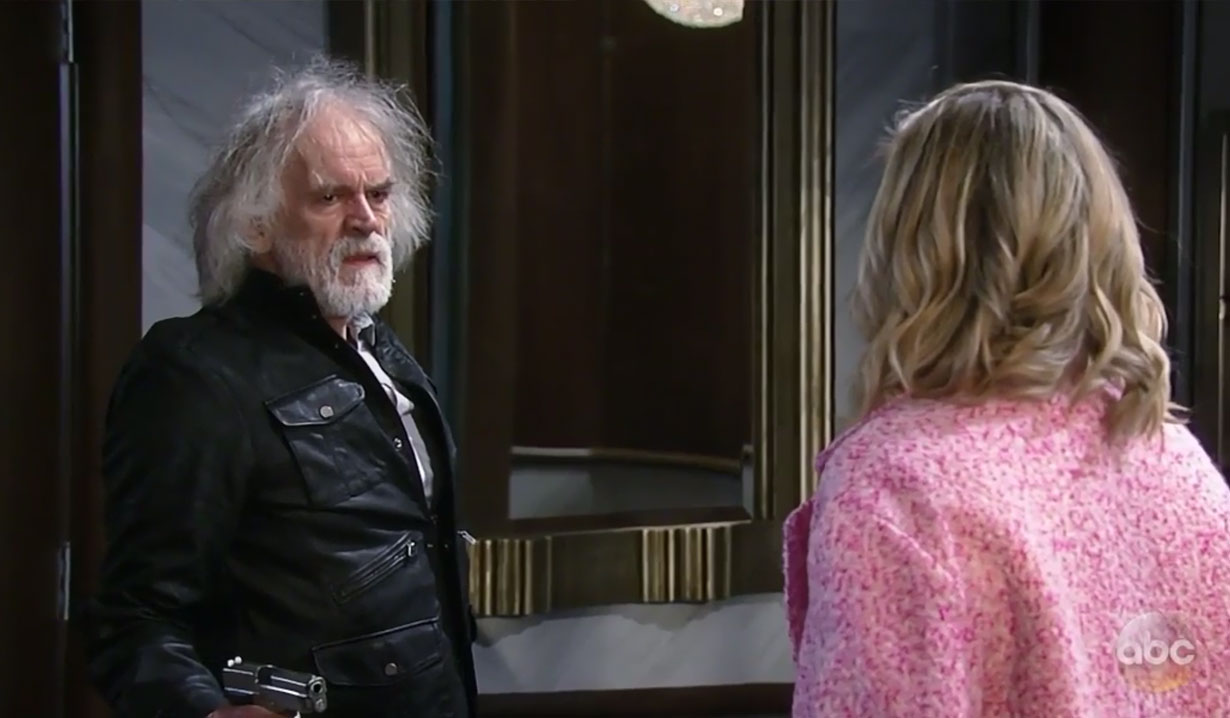 Anna finds Faison in her home holding Finn, who is handcuffed to the stairs, at gunpoint. The criminal forces her to give up her gun. She thought he was done with her after the last time and asks what he wants. He responds, “A lot of things, and you are first on the list.” Faison wonders what she thinks he should do about Finn. Anna cries she’ll do it, grabs a small trinket box from a table, and clocks Finn over the head to knock him out. At GH, Ava visits Franco in his art-therapy studio. He feels he has let Liz down, because he won’t have many family or friends at the wedding, aside from Kiki and Scott. Ava offers to attend and says nobody knows more about redemption than she does. She urges him to believe in second chances, which he agrees to give a shot. In the hallway, Kevin brings Liz up to speed on Spencer’s accident and Laura dropping out of the race. He is working on a new paper to keep himself occupied, one on the connection between biological reasons that cause psychopathic killers to murder. Liz suggests he talk to Franco because it may help him come to terms with his past. They go to talk to Franco about the idea, but he refuses. Liz thinks this could help convince Jason and others that he’s not the same man, but Franco tells her that removing the tumor didn’t automatically remove everything bad about him. Franco knows when it was taken out that there was a dark hole left in him, and somehow Liz filled it and saved him. He needs an explanation for that. Liz leaves them to talk, and Franco warns Kevin his head is a dark place. Kevin tells him there is a lot about him he doesn’t know, and he might find a sympathetic ear in him. Elsewhere, Griffin checks on Kiki after taking her MCATs and wonders why she’s not more thrilled. She explains she called Dillon in the middle of the night, only to find he has a new girlfriend and the long-distance thing isn’t working. She didn’t know how much she’d had to give up to get into med school, and she doesn’t even know if it will happen. Griffin lets her know that she got in because he has a friend on the admissions board. Kiki jumps for joy. Ava walks by and asks what is going on. Kiki tells her mom that Griffin told her she got in to med school. Kiki runs off to tell Dr. Bensch, and Ava thanks Griffin for helping her daughter. Maxie returns home, where her police guard checks the apartment out before letting her in. Amy stops by to see Maxie and bring news about her baby. Amy sold the rights to Ask Man Landers to become a movie, and she wanted Nathan to have his rightful half. She knew he wouldn’t take the money, so she put it in a trust fund for their baby. Maxie is moved to tears. Later, Maxie gets an emergency call from Crimson and has to rush out. Peter arrives at the PCPD to provide Nathan and Dante with tips on Faison that the paper has received from readers. Most are just letters from people sympathetic to Nathan’s plight. Peter leaves, and Nathan asks Dante if he would be his baby’s godfather. Dante accepts, and the two embrace. Later, Dante is given the news from an officer that Faison was been spotted at Anna’s house. Back at Anna’s, Anna asks Faison how long they will play this sick game because she’s so tired of it. He insists it’s not a game to him. She tells Faison he is an evil old man who will never get what he wants from her. She just wants to know how this thing between them ends. He tells her he wants a family with her and Nathan, but she suggests he look elsewhere. As sirens are heard in the distance, she tells him he’s running out of time. He doubts that, but takes off. Dante arrives with backup, and Anna assures him that she and Finn are okay. Dante calls Nathan at the station to fill him in on Faison. Nathan worries about Maxie and realizes he has to get to her. Meanwhile, Finn thanks Anna for saving his life yet again. Faison arrives at Crimson and finds Peter dropping off a budget report on Nina’s desk. He orders Peter to sit. Meanwhile, Maxie and her police escort arrive and walk straight into Nina’s office. Faison knocks the guard out and welcomes his daughter-in-law.

Nathan returns home to check on Maxie, but she’s not there.

Obrecht and Lulu scream for help.

Dante fills Jordan in on Faison’s presence in Port Charles.

Faison shoots someone at Crimson.

Finn tells Anna to be careful.

Sonny tells someone that Anna is way too close to this.

Jason takes a call and says he’s on his way. 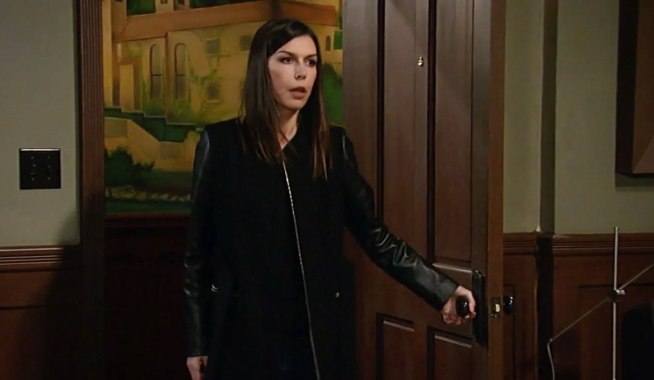 Two People Are Rushed Into Surgery After the Standoff With Faison 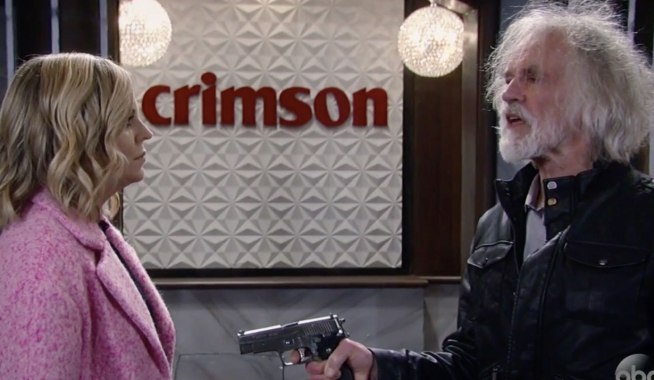