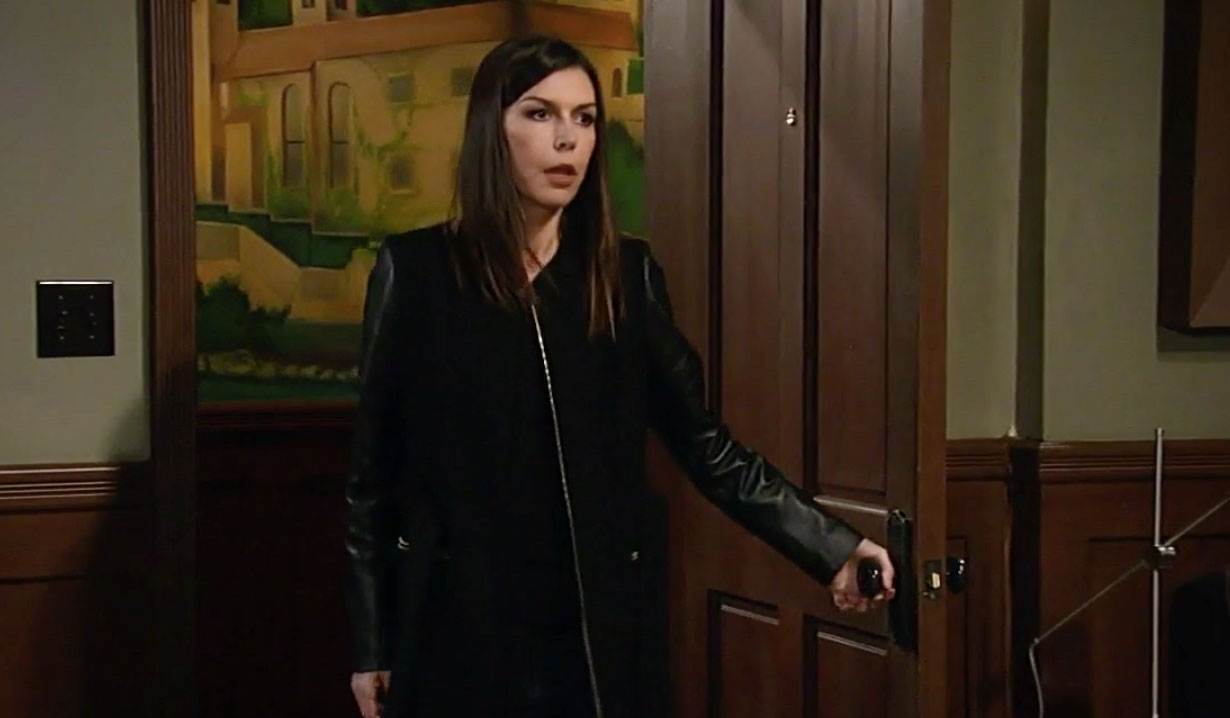 On Spoon Island, Lulu offers to set up a meeting with Faison and Nathan. Panicked, Obrecht blurts out that it will put Nathan’s whole family in danger. Faison correctly assumes he has a grandchild. Obrecht reluctantly says, “Not yet.” As Lulu presses Faison to let her call Nathan, Obrecht tells Faison Anna will never forgive him if he hurts Lulu. When he says he no longer cares about the woman who betrayed him, Obrecht tells him Anna found love with Finn. Faison puts a canister holding a lethal gas in front of her and leaves, locking the women in the room. Lulu frees Obrecht from her restraints. Obrecht tells Lulu if what is in the canister doesn’t kill her she will happily do the honors. They argue about Lulu’s interview with Nathan, which drew out Faison. Lulu defends herself, but Obrecht calls her arrogant and foolish. She reminds Lulu how Faison got to Robin and Jason. How could she think she could succeed when Sonny’s enforcer failed? Obrecht worries she will die in there not being able to warn Nathan. Lulu thinks they can find a way to escape. The women frantically look for an entrance to the tunnels when the gas starts to furiously leak. Finn meets Felicia at the Metro Court restaurant. As soon as he sits down she asks when he’s going to tell Anna he loves her. He denies his feelings, but Felicia isn’t fooled. She knows they’re both “gaga” for each other but neither one will admit it. She urges him to make the first move. Finn presents his arguments, but Felicia has a response to his every point. She knows if he chooses Anna, she will choose him back. Finn lets himself into Anna’s house. She’s not there so he sends her a text. As he waits for her response, he flashes back to their kiss. His happy memory is interrupted by a gun wielding Faison. After Faison rattles on about how Anna is his destiny, Finn casually suggests that Anna just isn’t that into him. Also, Anna is way out of his league. Faison wonders if she’s in Finn’s. Finn thinks he should be so lucky. Faison goes over his options with what to do with Finn, who charges him. Jason walks into Sonny’s office to tell the Don someone has been intercepting P.K. Sinclair’s emails. Anna walks in and, in Robin’s name, asks Sonny to back off Sinclair. She confirms she’s the one interfering with the emails because she can relate to what he’s going through with Faison. Sonny assures her they both want to stop Faison from hurting anyone else, but they need Heinrich to lure him out. The three of them go around in circles until Anna gets a text from Finn. She pauses and then tells the men about her meeting with Heinrich that’s set for tonight. She wants to be the one to meet him though. Sonny and Jason put up a fight, but Anna says it’s better to work with her than against her. They agree on a plan before she leaves. Sonny and Jason note they’ve never seen Anna like this before. Sonny compares Anna and Faison to his mother and Deke. He won’t let Anna live in fear anymore.

Anna walks up to her house and finds something in the snow. She pulls her gun and opens the door to find Faison holding a gun on a tied up Finn. While Maxie and Nathan wait for their appointment with Dr. Nero at GH, Nathan tells his wife he has a brother. Maxie is dumbfounded that so many people have had sex with Faison. As they discuss Nathan’s expanding family tree, Maxie says the only family that matters is theirs. They head into the exam room for an ultrasound. Everything looks fine, but Kim can’t determine the gender. They don’t want to know yet anyway. Maxie is totally into a gender reveal cake. The couple kiss as they look at their baby on the monitor. Felicia shows up and Nathan leaves to give them time alone. Felicia marvels at the sight of her grandchild. Kim gets paged away leaving Felicia to tell Maxie she and Mac have set up a nursery for the baby when it stays with them.

Nathan heads to the hallway and learns from Maxie’s guard that his mother is missing. The women join Nathan. Maxie says she’s feeling reassured and knows Faison can’t touch them. After Kim hands out copies of the ultrasound, Nathan gets paged back to work. Maxie tells him to show off their baby in the squad room. They lovingly say goodbye as he steps on the elevator.

Kiki jumps into Griffin’s arms to thank him.

Amy has news about Maxie’s baby.