Friday January 19, 2018: Obrecht fills in some blanks, Sam and Drew prepare for their wedding, Jason and Kim play pool and Laura quits the mayoral race. 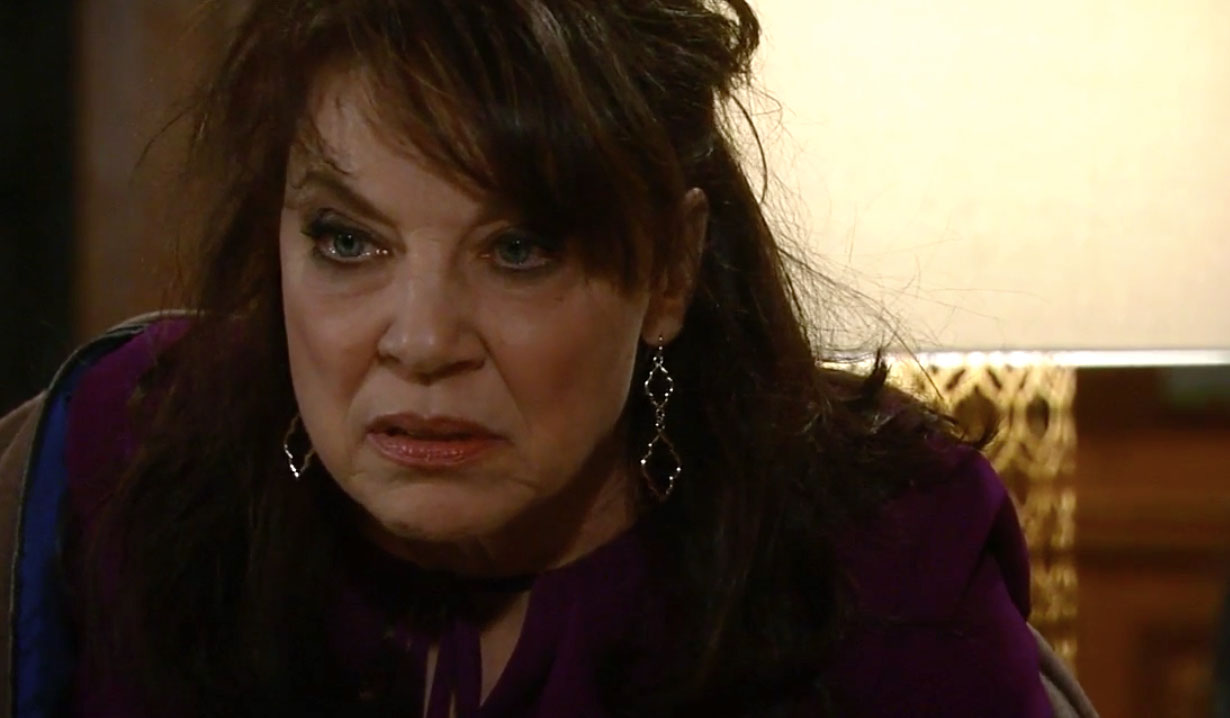 Anna looks over Faison’s file at home. She wonders if meeting Nathan is enough incentive to lure him back to town. There’s a knock at the door. Anna grabs her gun as she cautiously opens it to a drunk Obrecht, who collapses. She stands, demanding to know what Anna’s done with Faison. Anna assures her he’s not there, but wants her help locating him. Obrecht is only concerned with protecting Nathan from his father. Anna doesn’t understand why she kept the secret from Faison in the first place. Obrecht knew he would try to control Nathan and then destroy him if he resisted. She knew because she saw how he treated his other son, Heinrich, who Faison had no use for. A surprised Anna thought Faison would have wanted a son to follow in his footsteps. Obrecht retorts Faison wanted nothing to do with Heinrich because while the boy was Faison’s son, he wasn’t Anna’s. Obrecht worries Faison will come to Port Charles not to connect with Nathan, but to punish her for lying to him and making a fool of him. She worries he’ll take Nathan from her, but Anna proclaims Faison’s time hurting people is over. After Obrecht passes out on the couch, Anna leaves to investigate. Obrecht wakes up and walks out the door. She gets hit over the head by a man who looks like Faison from behind.

More: Anders Hove back as Faison Laura tells Alexis and Julian at Charlie’s that she’s dropping out of the mayoral race to take care of Spencer. It seems he broke both his legs while skiing. Alexis worries Ned will run unopposed. Meanwhile, Julian leads Kim to a table as the chef comes out to tell Julian all their food deliveries are rotten. He can’t cook anything. Kevin literally bumps into Valentin at GH. Valentin mentions he’s looking to fill Laura’s vacancy on the board of directors while she runs for mayor. Kevin is incensed. Across the way, Laura and Alexis continue their conversation about the mayoral race. Alexis says Laura would have made a great mayor and walks off. Laura comes upon the men and bickers with Valentin, who stalks off. Laura tells Kevin she’s going to tend to Spencer, but urges him to stay in Port Charles and run for Mayor himself. Kevin balks, but supports her desire to take care of her grandson. At Sonny’s, Jason relays his interaction with Sam on New Year’s Eve. Sonny knows Sam will love Jason forever, the same way he loves her. After Jason leaves, Julian walks in to tell Sonny about the sabotage at Charlie’s. He blames Ned and insinuates Sonny had something to do with it as well. Sonny denies, but suggests Julian sell his place. Julian warns Sonny that Jim Harvey’s plans might make him a stranger in his own city. Anna is next to visit the Don to tell him about Heinrich. Sonny wants to use him as bait to lure Faison, but Anna refuses. Sam rushes into the condo with her wedding dress. She kisses Drew, but breaks away because they have things to do before their wedding, which is taking place that night in their home. They disperse to prepare when the doorbell rings. Sam runs downstairs and answers in her robe to Jason. Drew joins them as Jason starts to inform them of his and Sonny’s plan for Faison. Drew wants to hear him out, but tonight isn’t a good time. He and Sam are getting married. Jason thinks they should take the kids on their honeymoon and stay away for a while. Drew wonders if he wants to face Faison on his own, as Sam says they’ll let him know if they take the kids out of town. After Jason leaves, Drew makes plans for their family to go to Tahiti. Sam can’t wait, but points out they need to get ready for the ceremony. As Sam gets ready in her room, she flashes to her and Jason’s wedding day.

Jason plays pool at Jake’s as Kim walks in. Kim joins him in a game, noting he looks just like Drew, but he’s nothing like him. Drew liked to kid around and had a little swagger. And he definitely talked more than Jason. Kim asks about Jason’s five year absence. He lost those years, but he’s good with the life he has now. She wonders how he deals with Sam being with Drew. Jason trusts Sam to make the right decisions. He tells Kim she and Drew are getting married tonight. Kim is happy for them, but is taken by surprise. Julian enters and asks Kim if he can buy her dinner to make up for what happened at Charlie’s. Jason heads to the bar. Kim learns Sam is Julian’s daughter, as he warns her about Jason’s profession.

Curtis and the Davis women arrive for the wedding.

Spinelli thinks Jason and Sam are sacrificing their happiness.

A Mysterious Figure Catches up on...

Sam and Drew get Married