A Mysterious Figure Catches up on Port Charles News

Thursday January 18, 2018: Lulu and Dante surprise Nathan and Maxie for their anniversary, Laura and Ned argue over what is happening to Charles Street, and Franco questions Jim about the past . 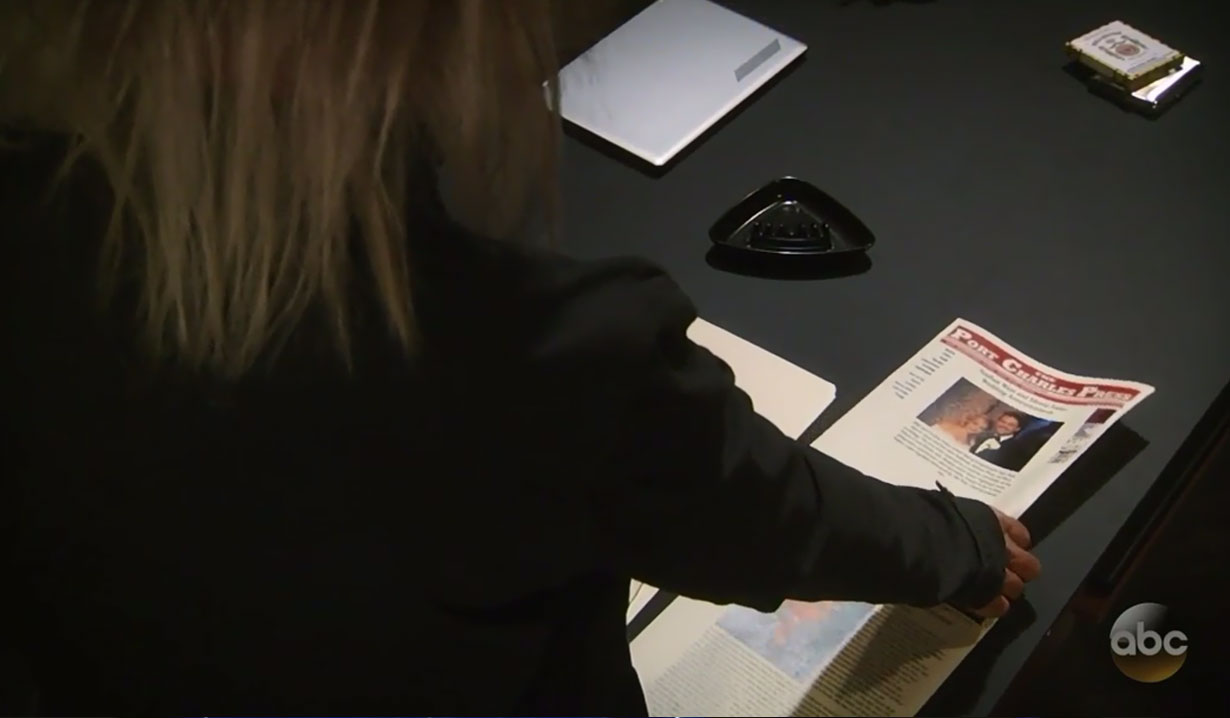 At Charlies’, Julian lets Molly, Kiki and TJ into the pub to warm up after the heat in their building was cut and they were tossed out.

Alexis meets with Ned at the Metro Court, where he asks her to join his campaign as legal counsel. She refuses because she doesn’t support his platform of developing Charles Street. Suddenly, Alexis gets a text from Julian that Molly’s been tossed out of her building.

Liz runs into Laura at GH and is thrilled to hear she’s running for mayor. Laura explains she is only doing so to stop Jim Harvey’s plans for buying up and developing Port Charles. Jim drops by Franco’s studio and pressures him to sell out and move to a better location, which may help inspire his art. Liz arrives, pulls Franco away from Jim, and begs him not to sell. Franco admits he’s having trouble painting here, but Liz believes that is more about him than the studio. Liz receives a text about her wedding dress and rushes off in excitement. Franco changes the subject with Jim and asks if he ever noticed another little boy living with him and Betsy. Jim remembers Andy, and that he suddenly died from heart issues. Franco reveals Betsy lied about that, and explains the short version of what happened with Drew. After Jim leaves, Liz returns and checks in on Franco. She doesn’t like Jim one bit, and Franco wishes she could get a hold of his mom to find out what went down between her and Jim. At Maxie and Nathan’s, the couple continues to argue about Faison. Lulu and Dante drop by with a surprise for their anniversary. Lulu drags Maxie go out into the hall where a bassinette is sitting. They notice a man with long grey hair nearby messing with a plug, rush back inside and tell Nathan that Faison is in the hall. Nathan and Dante investigate with guns drawn, but the man is just the new superintendent. Later, Lulu and Dante have another surprise, pieces of their wedding cake that they froze so they could eat on their first anniversary. The couple enjoy their wedding cake and share a kiss. Somewhere, a mysterious figure in a black trench coat reads the story about Nathan being Faison’s son in the paper. He pulls out some fancy cigarettes, places them in a metal cigarette case, and throws away a bag from the Port Charles Smoke Shop which they came in. He continues to read older news articles, including about Anna being acquitted in Carlos’ death, and Nathan and Maxie’s wedding announcement. He takes a pen and obsessively circles Maxie’s photo. Back at Charlie’s, Alexis arrives and Molly explains the landlord claims there was a gas leak and they got kicked out. Laura and Ned follow Alexis in, and Laura has learned everyone has been evacuated indefinitely due to the building’s structure possibly being compromised. Ned says it is obvious the building isn’t safe, but with Niagra Equities help they can make the neighborhood safe again. Laura reminds him the people living there now wouldn’t be able to afford the new apartments, and a political argument ensues. Ned points out that neither of them will decide on what happens to Charles Street as mayor, the people of Port Charles will vote on that issue. Julian gets involved in the argument, which Ned calls out because he thinks Julian doesn’t give a damn about politics and is only trying to impress Alexis. Jim walks in, and Julian accuses Jim and Ned of throwing the bricks through his window after he rejected Jim’s offer to sell. Laura stops them from coming to blows, and refuses to have them disrespect today with violence because it’s the anniversary of Mary Mae Ward’s death. Jim rolls his eyes at the mention of the community’s legendary figure, but Ned scolds him because Laura and Mary Mae did a lot for this community. Laura gets called away by a phone call, which is bad news. Alexis checks on TJ and Molly, and asks them to come live with her until they get this mess straightened out. She tells them to pack up what they have in her car, and then makes small talk with Julian about his new friend Kim. He reminds her that she wanted them both to move on. Later, a frazzled Laura reveals to Alexis she has to withdraw from the campaign. Outside, Ned asks Jim if he knows anything about this brick. Jim doesn’t, and assures Ned that everything will work out in his favor. Jim walks Ned to his car, and questions him about this long lost Quartermaine, Andrew.

Kevin confronts Valentin about being after Laura’s job.

Laura reveals her campaign is over.

Anna warns Obrecht that Faison’s time of hurting people is over.

Sam says to Drew, “This is about Faison, isn’t it?”

Sonny tells Jason that Sam loves him and will love him forever.

Ava Is Haunted By Her Sins During...