Ava Is Haunted By Her Sins During Her Surgery

Wednesday January 17, 2018: Ava confronts her past as she undergoes surgery. 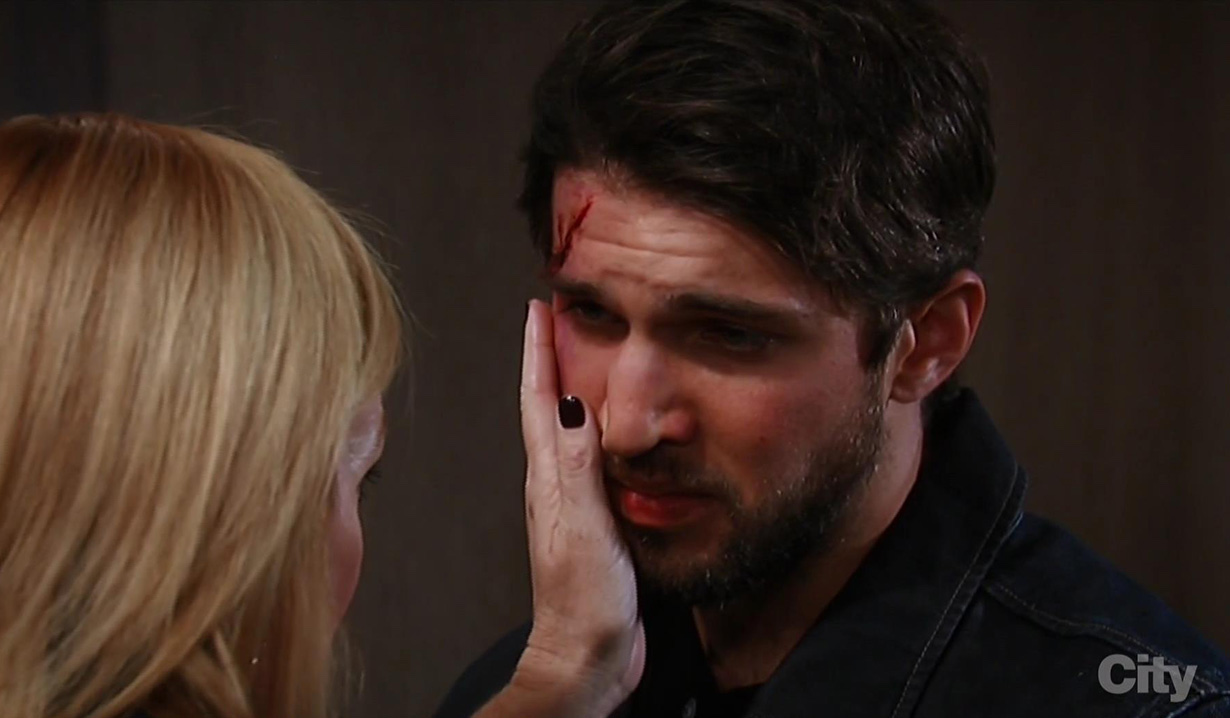 Ava looks at herself in the mirror at home, hearing Carly’s voice telling her how ugly she is inside and out. Julian stops by to wish her luck with her procedure, but advises her to take responsibility for her actions if she truly wants to find peace.

Ava visits Sonny at his house. She wants to see Avery, but Sonny says the girl is with her mother: Carly. They argue as Carly walks in with Avery. Sonny tells Carly to take his daughter into the kitchen. Ava cries begging Sonny to visit with the little girl. Carly returns to pile on. Ava promises that her daughter will know her and stomps out. Ava is prepared for surgery in the O.R. with Griffin and Kiki by her side. Her doctor says she will wake up a new woman and puts her under. Ava later wakes up to Kiki and Griffin saying the procedure was a success. Griffin gives her pills to take. Ava hears him say they’re Lithium, but they’re really ibuprofen. She cautiously watches a nurse leave the room. Griffin says the bandages will have to stay on, but he can take her home when she’s ready. Ava and Griffin enter the Metro Court restaurant. Ava walks to the bar where Laura is having a drink. Laura hopes her appearance was worth selling her soul. Ava sees the nurse from her operation and follows her to the bathroom, but no one is in there. Carly enters to yell at Ava about Morgan. Once alone, Ava looks in the mirror to see her scar has returned. Panicked, she glances at her phone and reads a message that says, “I know who you are.”

Ava, whose face is again flawless, meets Franco at Kelly’s. They discuss the portrait he painted of her for her art show, as she sees the nurse again. Ava runs out after her, only to bump into Nina. Ava assumes she’s the one sending the texts. Ava dredges up their past, but Nina says she doesn’t even think about her anymore. A shaken Ava returns home. She hears a knock at the door and opens it to a distressed Morgan (played by Bryan Craig). Ava freaks out, yelling, “You’re dead!” He assures her he’s real and she embraces him. He has fresh wounds, a prosthetic hand and remains paranoid that someone is trying to kill him. She thinks they should tell everyone he’s alive, but he wants to gather himself before that happens. He sleeps over and the next morning Ava gets more disturbing text messages. She tells Morgan she knows how to tell his parents he’s alive.

More: Lucas back onscreen in February

Ava brings Morgan to the gallery. She wants to be the person to reunite him with his parents so people can forgive her. Later, as Ava plays host at her party, she sees the nurse again. She runs over to Sonny and Carly (who she begged to attend) and tells them Morgan is alive. They don’t believe her so she yells for Morgan to reveal himself. Instead of Morgan, Connie appears in a white dress with blood stains on it. Ava freaks out, wondering where Morgan is. Connie says she only dreamed him, and her, up to absolve herself. Ava refuses to be judged by anyone in the room and calls everyone out for their crimes. Connie says the lies are over and it’s time to face the truth. The lights go out as the party goers remind Ava of what she did to them. She yells out for everyone to stop. The lights come back on and she sees the nurse, who was the one sending her the texts. The nurse reveals herself to be a grownup Avery. Ava cries as she hugs her daughter, who sides with Sonny when it comes to Morgan. Ava declares she’s different now. Avery reveals Franco’s painting that highlights the scars on Ava’s face. Ava gasps, as the scars have returned to her real face. Avery says it’s time to wake up and snaps her fingers.

Ava wakes up on the operating table. Later, she stands in front of the mirror at home with Griffin, marveling at her restored face. She mentions her dream and says she won’t waste her new lease on life. They go to the Metro Court where Sonny tells her she’s not welcome there. Ava chooses to eat there and asks Griffin to get them a table. She walks to the bar and is served a martini by the nurse from her dream. The young woman says, “I know who you are Ms. Jerome.” Ava nervously takes a sip of her martini.

Nelle Hopes for a Future With...

A Mysterious Figure Catches up on...